This hack describes the conversion of an IKEA BORRBY lantern into a Simple Weather Station with the following features:

Please note, a basic to reasonable level of electronics understanding is required for this project along with some soldering skills. Also note that I have not designed the electronics, rather I have used existing designs published on the internet by kind souls around the world and combined them all into one housing (the Ikea lantern). A 7 to 12V DC, 1A power supply is adequate to power the weather station. Total build time for the project is several months on and off. The electronic project files (which include electronic circuit diagrams together with microprocessor firmware files) are available at the following links:

Remove the 4 plates of glass in the Lantern by bending upwards the metal tabs holding them in position and lifting them carefully out of their fixtures. Cut away the front vertical grilles using a Dremel or similar rotary tool. Paint over any exposed metal with matt black paint. Glue some decorative card behind the remaining grilled areas.

Assemble and solder the electronic circuits onto the stripboard according to the electronic circuit diagrams contained within the web links at the beginning of this article. The various microcontrollers are programmed with the hex files firmware also contained within the web links using either a Pickit2 (or similar) or an Arduino Uno (or similar) programmer. 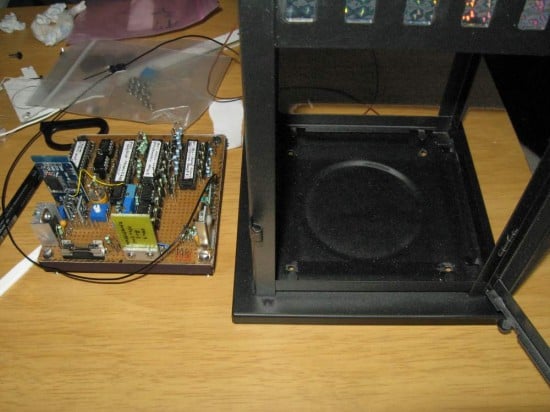 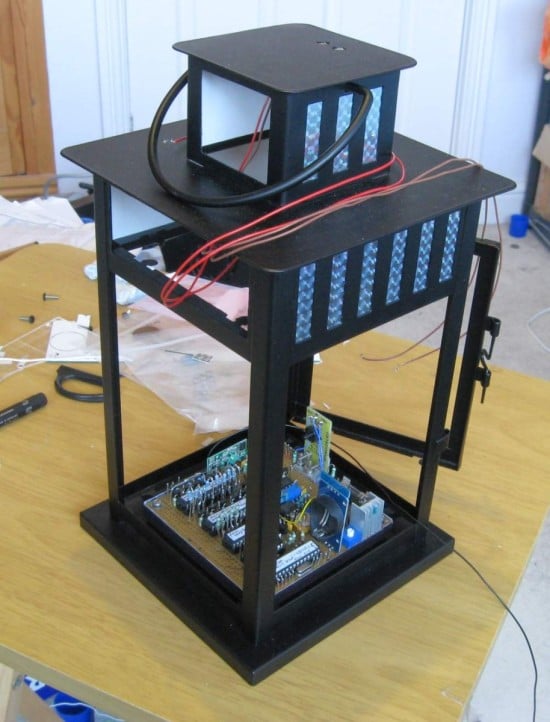 Cut out a piece of plastic (around 2-3mm thick) that is the same size as the previously removed front glass plate. This will become the plastic graphical LCD mount. Into this plastic cut out 2 rectangular ‘windows’ approximately the same size as the display area of the graphical LCDs. Fix the 2 graphical LCDs to the rear of the plastic mount by firstly screwing 4 small pieces of plastic (with 3mm tapped holes) to the 4 corners of the graphical LCD using M3 screws, and then gluing these 4 small plastic pieces to the rear of the plastic mount so that the 2 display areas align with the 2 rectangular cut-outs. Design and print out onto A4 paper an appropriately sized front facia, protecting the front visible surface with a layer of self adhesive transparent plastic cover film (the same that is used to protect book covers). Cut out of the paper facia 2 rectangles to align with the 2 rectangles in the plastic mount. Glue this facia onto the front surface of the plastic mount. Place the mount containing the graphical LCDs in the space that was previously occupied by the front glass plate, and fold the metal tabs back over to keep the mount in place. 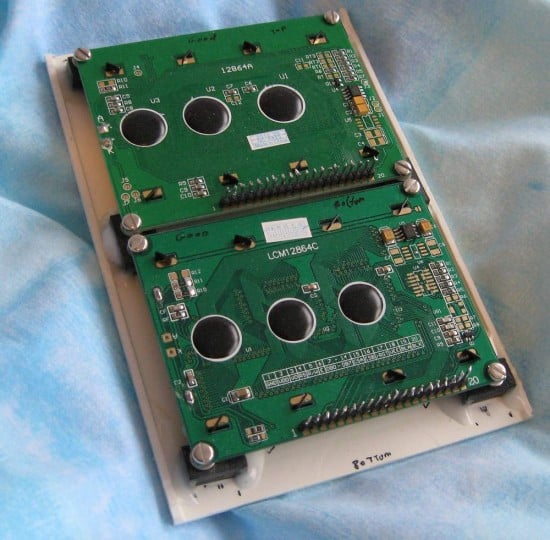 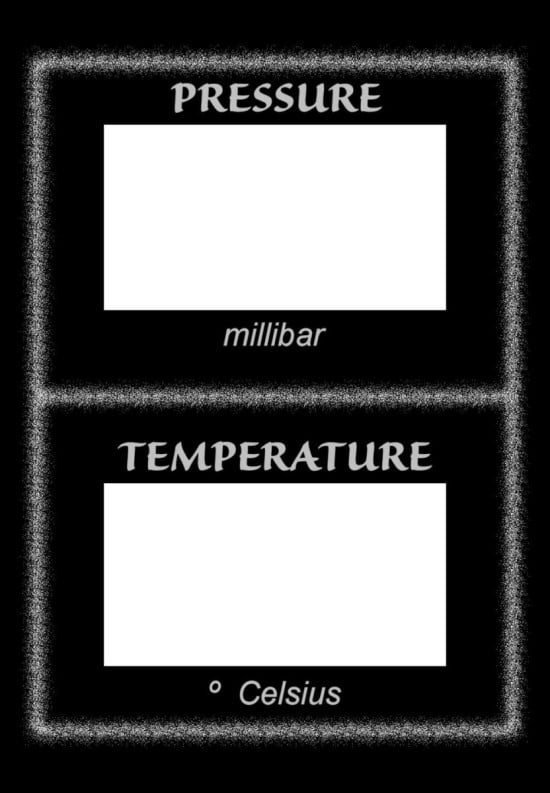 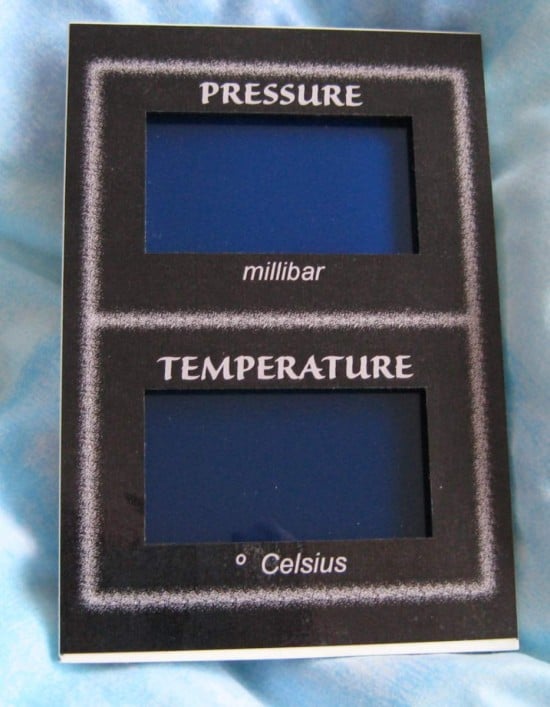 Now cut out a piece of plastic (around 1-3mm thick) that’s large enough to cover the lower of the 2 areas that have had their grilles removed. This will become the temperature/humidity/pressure display mount. Into this mount cut out 3 rectangles approximately the same size as the display areas for the three 7-segment LED displays. Sandwich pieces of thin grey transparent sheet between the 7-segment displays and the mount (to increase viewing contrast) and then glue the displays onto the mount using 2-part epoxy adhesive. Design yourself an appropriately sized front facia and again print it out on A4 paper and protect it with a layer of self adhesive transparent plastic cover film. Cut out of the paper facia 3 rectangles to align with the 3 rectangles in the plastic mount. Glue the facia onto the front surface of the display mount. Solder onto the 7-segment displays 30cm long wires, and then fix the mount (containing the 7-segment displays and facia) into the gap at the front of the lantern using epoxy adhesive. (NOTE, IT IS IMPORTANT TO SOLDER THE WIRES ONTO THE 7-SEGMENT DISPLAYS BEFORE GLUING THE MOUNT IN PLACE AS IT’S VIRTUALLY IMPOSSIBLE TO ACCESS THE 7-SEGMENT DISPLAY SOLDERING POINTS AFTER THE MOUNT HAS BEEN FIXED IN PLACE.)

Repeat the procedure in Part 3 to mount the outside temperature 7-segment LED display to the upper lantern area that has had its grilles removed. The words “MIN” and “MAX” are produced by printing them (white letters on a black background) onto a piece of A4 transparency film and illuminating them from behind with LED light bars that produce a diffuse light source. The wireless symbol is generated using the same printing method and is illuminated with an LED bar from the rear if a wireless signal containing temperature information has been received in the last 30 seconds.

A small waterproof hobby enclosure is obtained that is large enough to house 3xAA batteries, and a small piece of electronic stripboard to which the circuit for the wireless temperature transmitter is now soldered to. To provide meaningful measurements this enclosure is placed in an outside location that is permanently in the shade at any time of day throughout the year. 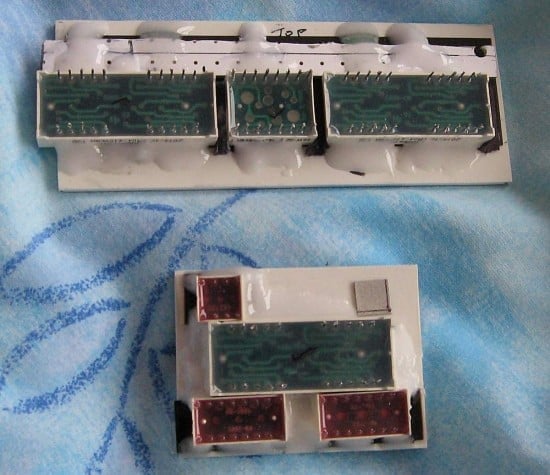 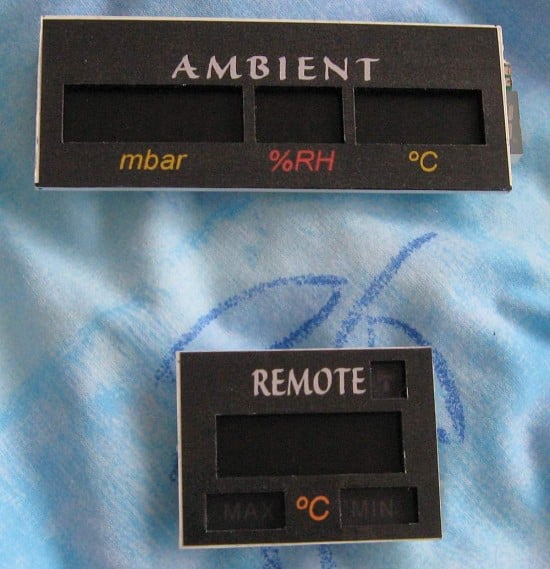 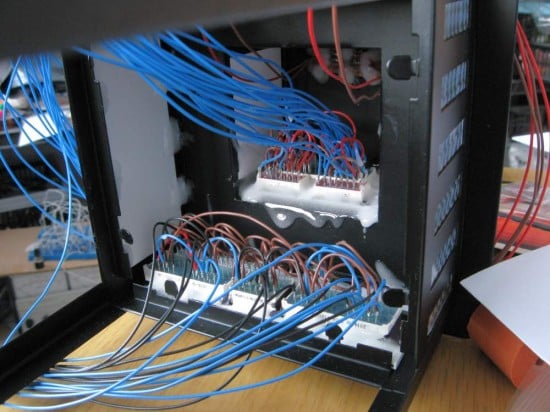 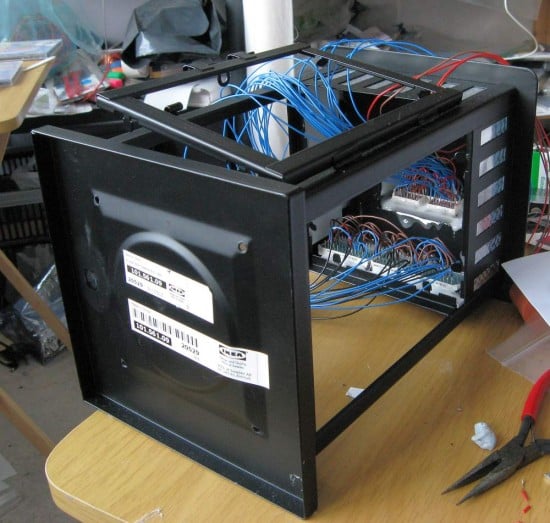 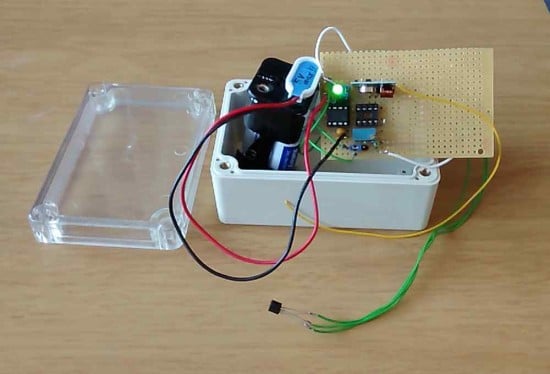 A further piece of plastic (2-3mm thick) is cut out that matches the size of the glass sheet that was originally in the rear hinged door of the lantern. This will become the mount for the alarm clock display and electrical connectors/switches. A rectangular cut-out of similar size to the display area of the alarm clock’s 16×2 alphanumeric LCD display is made into the mount. The alarm time that is manually set on the alarm clock will cause the “MIN” and “MAX” values of the outside temperature display to be reset automatically at this time. Further holes/cut-outs are made for the electrical connectors that allow the inside temperature and humidity sensors to be located external to the lantern. Holes are also provided in the mount to allow push buttons switches to be fitted to be used in setting up the graphical historical displays and alarm clock. The toggle switches are optional and can be omitted. A power supply inlet hole is also required in the mount. A paper facia protected with transparent cover film is again produced. To aid in the production of the facia, and, in particular, the alignment of the descriptive text and line elements surrounding the cut-outs on the facia the plastic mount (acting as a facia dimension guide) can be scanned using a standard flatbed scanner, the resultant image can then be manipulated in a graphics editing package. The finished facia is again glued onto the mount, which, in turn is located into the empty space in the rear hinged door previously occupied by the glass plate. 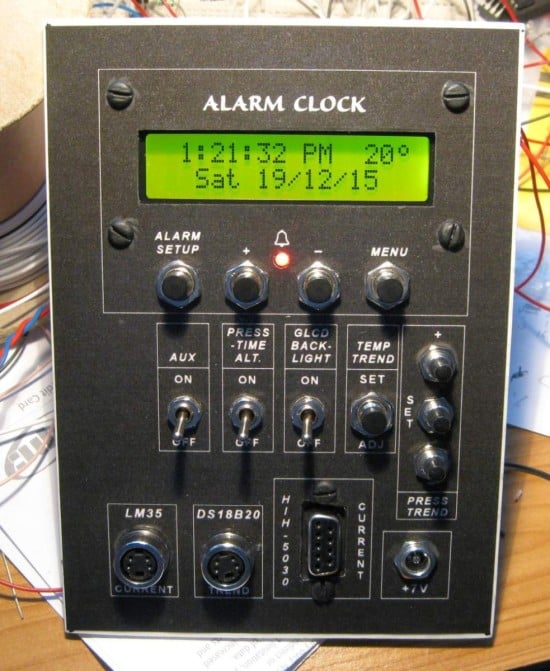 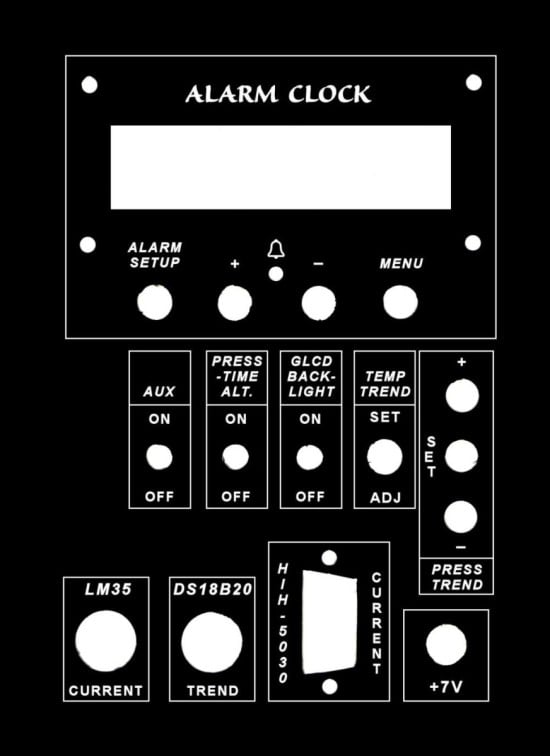 Electrical connections are now made between the various displays/connectors/switches and the electrical circuits on the stripboard. NOTE, neatness is thoroughly discouraged at this point as shown in the wiring photo. 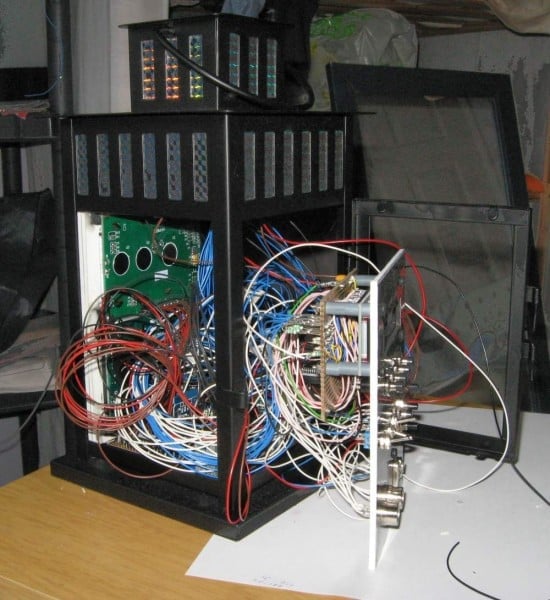 For the side walls a suitable artistic image was chosen, printed on A4 paper and laminated. This was then cut to size, to match the dimensions of the previously removed glass plates, and, using Blue Tak reusable adhesive fixed in place. (Should access to the interior of the lantern prove necessary at a later date the non-permanent reusable adhesive used here will be highly advantageous.) 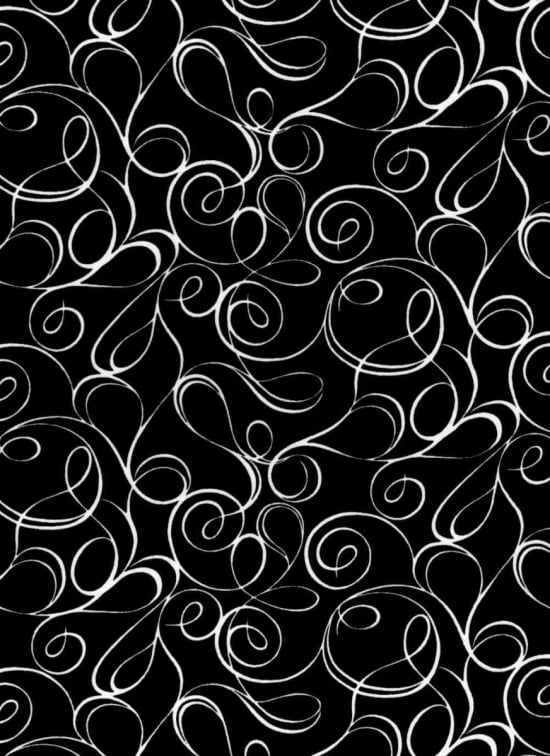 A YouTube video of the weather station is available here. 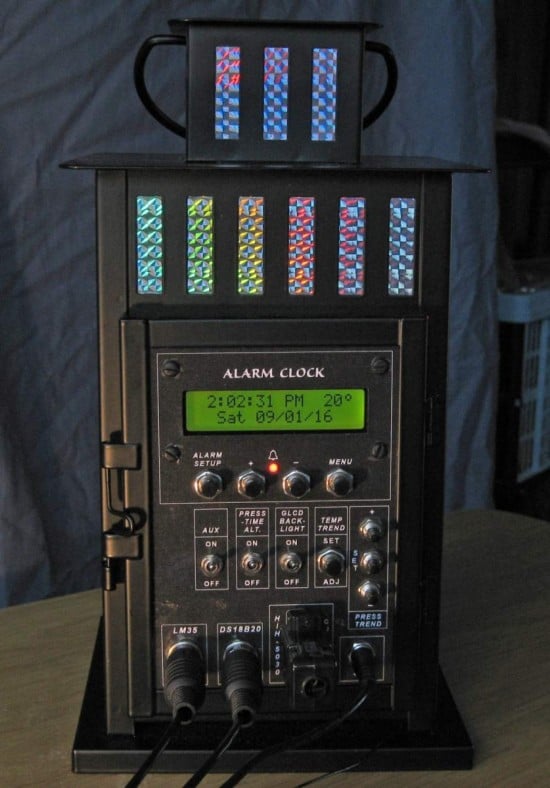 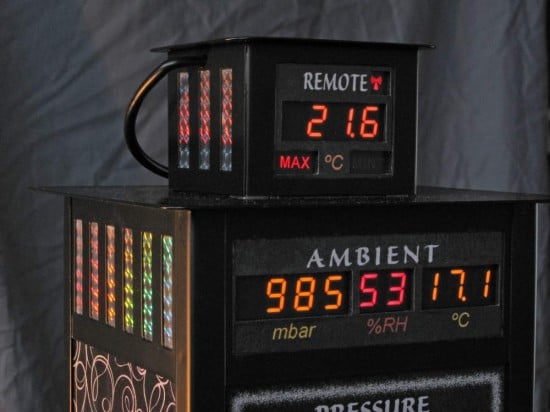 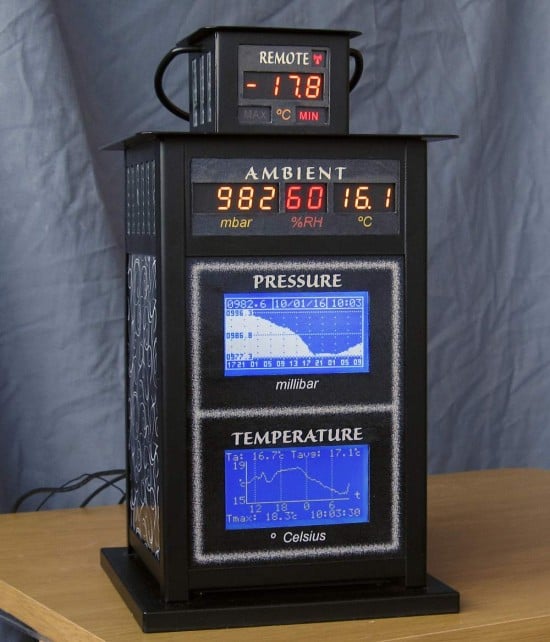