I’ve had this simple wood shoe rack from IKEA probably for more than 15 years. 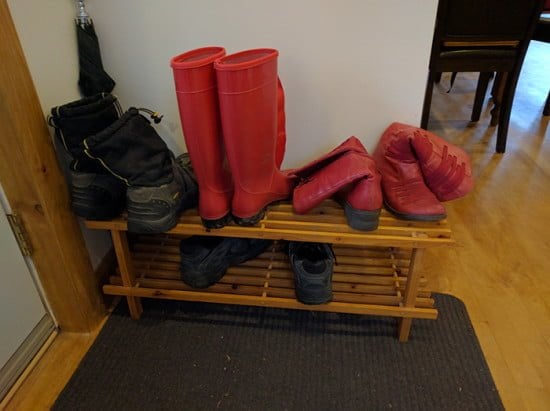 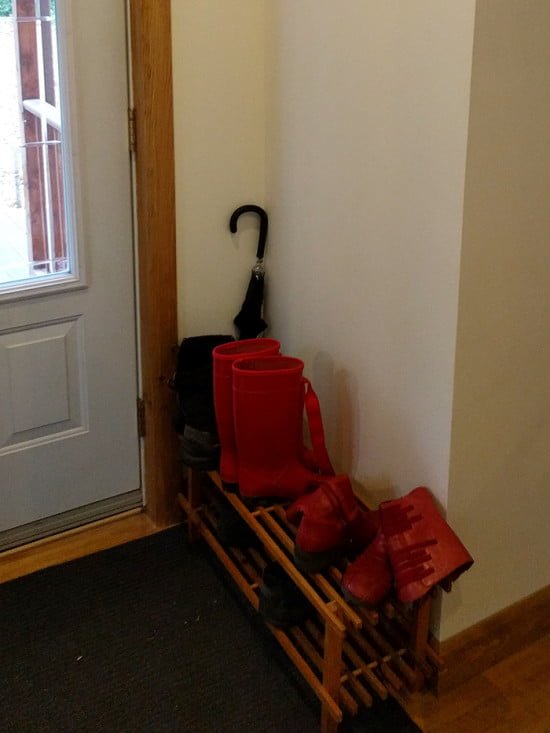 I bought it while I was in college, they were cheap and ubiquitous. I actually had several copies, but only this one survived the purges of the years. It is now so old I haven’t been able to find its original name anywhere, but anyone over 35 should recognize it! The design is very simple, with no screws or glue required. The legs simply have indentations into which the slats slide, so they can be taken down and put together in less than a minute. This shoe rack was light and integrated well into any decor, so I carried it around from apartment to apartment, years after years.

Last year we moved to a new house, and I installed my good old shoe rack by the back door. It was a good place for it, but there were a few little things that bothered me (yes, I am old and picky now).

a) It is ever so slightly too long and too deep, so that it went over the door molding and was larger than the section of the wall by about an inch.
b) The boots can only go on top of the rack, and so the water and slush always drip on the shoes underneath. That has always been a concern, and the boots usually end up on the side of the rack.
c) I am not as spry as I was once and like to sit to put on and remove my boot, so I really wanted a bench.
I looked around for an appropriate replacement, to no avail, so I decided to transform my IKEA shoe rack to fit my needs, namely: make the shelves shorter and narrower, make a section for boots, and add a top to sit down.
I measured the space available and the height of our shoes (!) and came up with this plan: 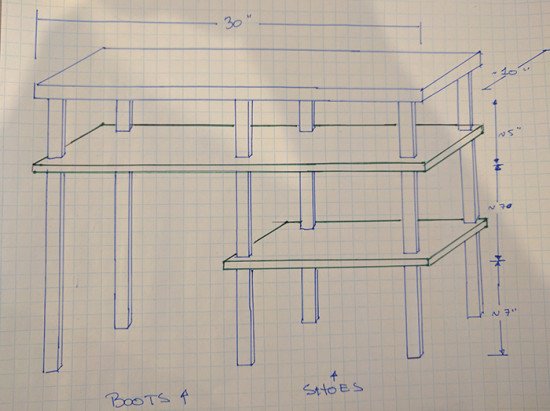 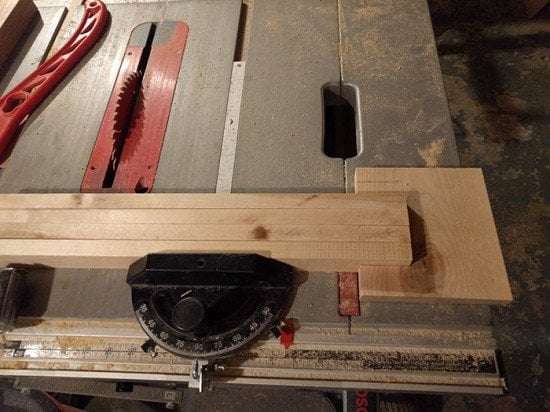 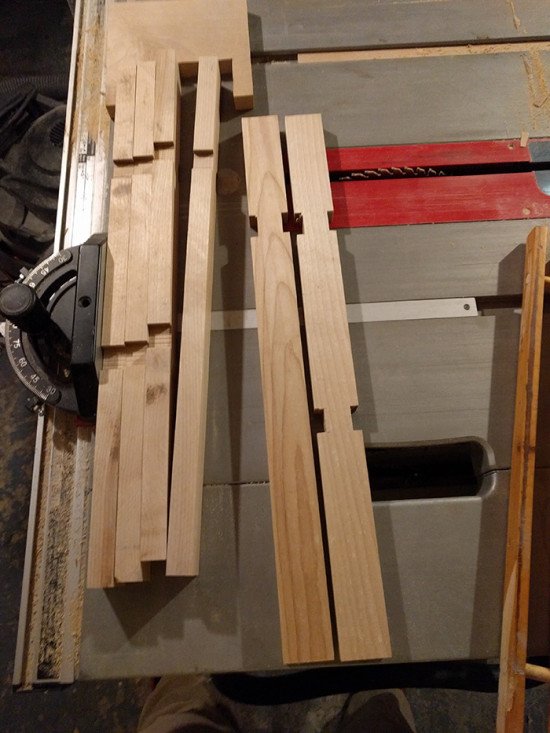 5. I cut indentations in the legs using a table saw with the blade set low, just enough to rip out the depth required. I made a small U-shaped jig to hold all the legs together so that the indentations could be made on all legs at the same time and be even. I had to make the lower indentations on four legs first, then I increased the size of the jig to accommodate the 6 legs for the top indentations.
6. I sanded down all the pieces.
7. Dry fit to test the assembly: 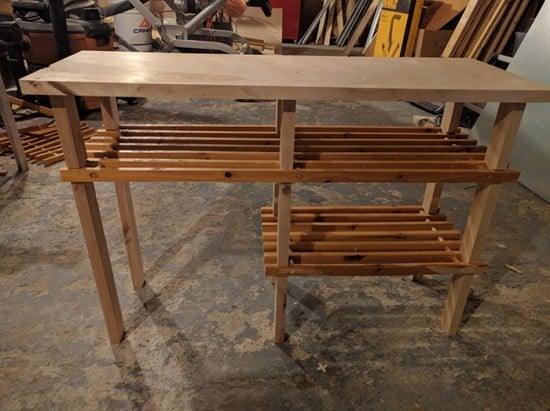 8. The indentations I made were a bit too large, and thus the assembly was a little wobbly, too much to sit on comfortably. I ended up gluing and adding small screws to fix the outside laths to the legs (tip: predrill all holes, the old wood is super dry and might crack). I also added a piece of wood between the left legs to add stability. This piece is glued and screwed in place. 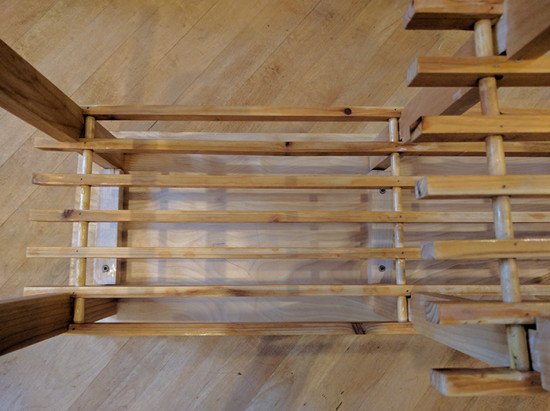 9. To fix the top plank to the legs, first I screwed small pieces of wood to the underside of the plank. These pieces are the same length as the space between the legs and placed so that they will be placed right between the legs once assembly is completed. Then I installed the top on the legs and screwed the legs to those pieces, after predrilling.
10. Once fully assembled I put two coats of furniture oil on all parts.
11. My new bench in place! Very happy with the results. 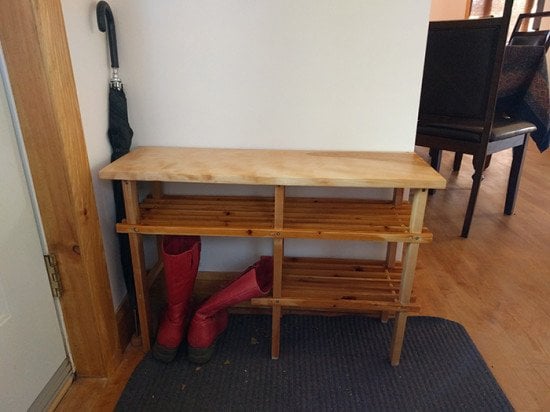 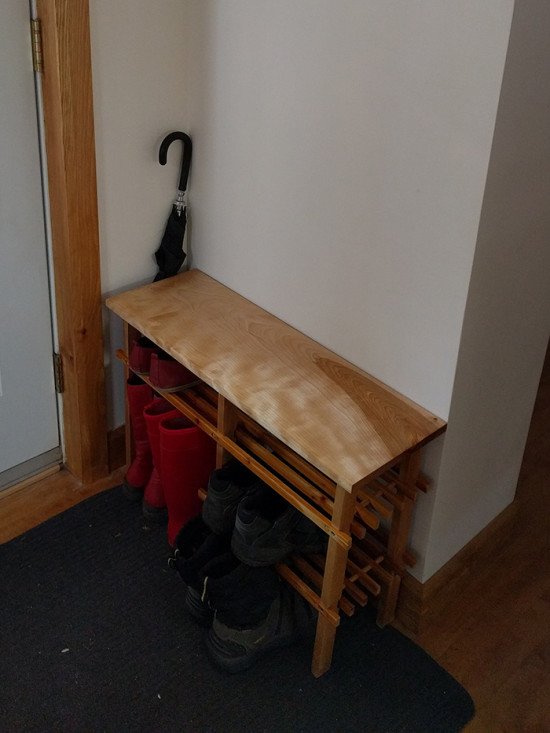