I used the Ikea Blanda Blank metal bowl to create this lamp, and then made a video tutorial. 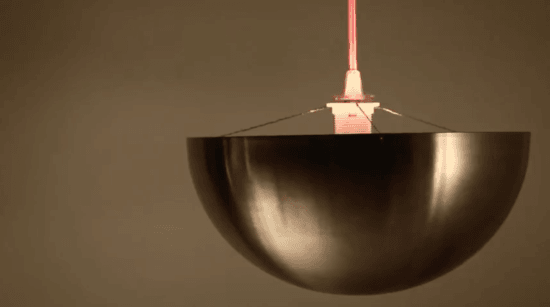 For this lamp I used a common film lighting trick, bouncing a bright light off the ceiling, to evenly increase the light in the room without creating a dominating source.

The principle is to use the white ceiling as a giant reflector to spread a powerful light source evenly over the space. To achieve this I took a large metal Ikea mixing bowl, highly reflective, and used it to focus the output from a 100 watt bulb onto the ceiling.

I used as thin wires as possible to attach the bowl to the cable, to prevent the wires from casting shadows and to make the lamp look like it is hovering.

Factors like size of the room, or distance from the bowl to the ceiling will also effect the light quality. The closer the bowl is to the ceiling the brighter the light will be, however, when further away it will spread the light more evenly across the ceiling and thus over the room.

I installed this one in my living room where I think it works exceptionally well. The room is massive, which gives me lots of ceiling to work with. When it’s on you can see everything, which is what you usually want from an overhead light in this type of space, but the room still has a low-key atmosphere. Also the bright ceiling and dimmer evenly lit walls help the room feel contained, whereas a harsh overhead bulb would be more uncomfortable.