We made this dog crate system for our 2 beagles, constructed entirely from IKEA items. We scored 2 IKEA Malm desks that were marked down (minor blemishes) at IKEA As-Is.

One of them remained the way it was supposed to be. We just added some additional holes on the bottom of the “feet”. Then we took the desktop of the second desk and one of the side elements and fixed them on top and in the middle, as a divider. Basically, we drilled some holes, used the wooden pegs that came with the desk and used them to fix it on top.

We didn’t even have to buy additional screws, everything was already there 🙂

To stabilize it, we used elbow joints and fixed them with a couple of screws. (Actually, those were wall fittings from IKEA shelves we had left over, we repurposed them.)

Lastly, we slot in our dog crates with dog beds. 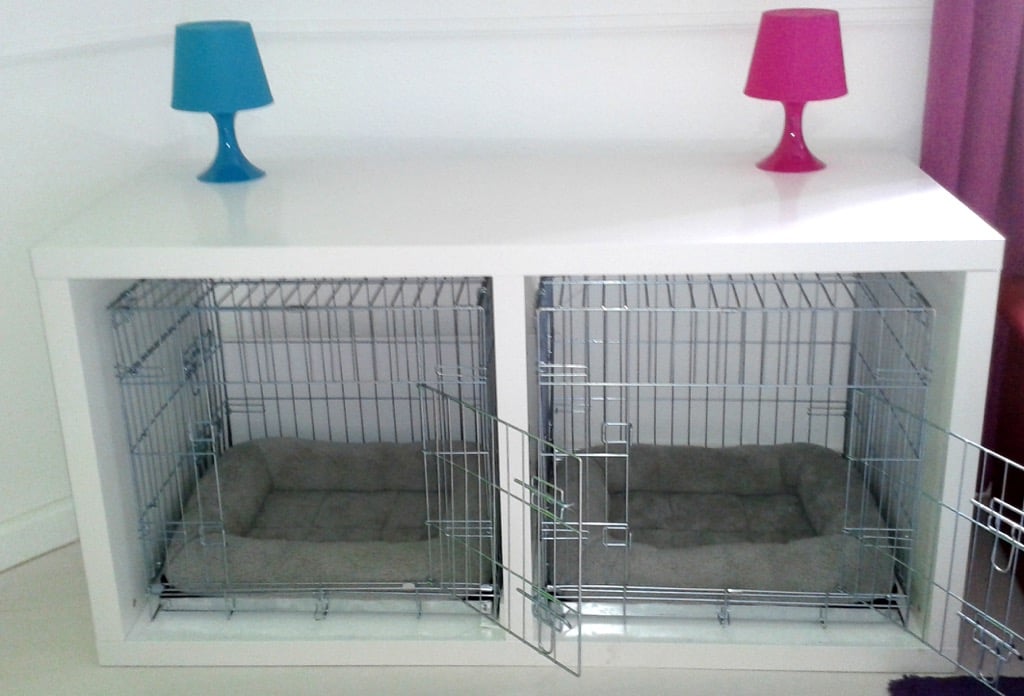 ~ by Tina and Gregor

Ruth and her partner were awaiting the new arrival (a Cavalier King Charles Spaniel puppy) and knew from the very beginning that they wanted to crate train him. But, as they live in a one bedroom flat, they didn’t want to buy one of the huge metal crates that would look hideous in the corner of their relatively small living room. They thought about all sorts of options and ended up googling ‘innovative dog crate’ into Google and eventually found this fab idea on IKEA Hackers. Read more.

This canine condo is great because it gives each dog its own room to sleep in at night. Otherwise, when they go to bed and the lights go out, the dogs are like… “Mom and dad are sleeping! Party time!” Read more.