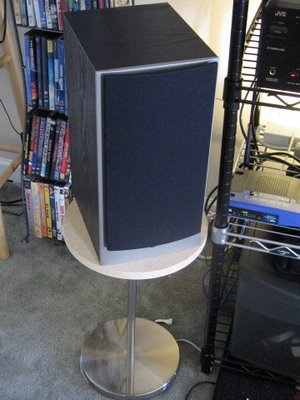 i don’t have audio speakers so i’m not sure whether these gaje speaker stands are as bad as this hacker makes them out to be. nonetheless, fluffy rants gives a nifty solution to the problem: “yeah, the gaje stands are kind of dumb… normally to mount a speaker on it, you either have to attach it using some velcro (which it comes with), or drill holes into the speakers themselves. my old rear surrounds I used the velcro on, but my fronts were too heavy/big for that and so I just had the other pair taking up space.

i’d planned on doing a modification like this for a while, and since my rear speakers developed a bit of a rattle a while ago (which i was unable to fix; i think the driver itself went bad) and i finally had enough of it and decided to buy a proper 5-channel matched setup, and the new speakers were definitely too big, since the rears are bigger/heavier than my old fronts.

so, this way I have some pretty nice stands (with cable routing) which can actually support decent speakers and have great isolation, but didn’t cost much at all (basically $62 for all four, plus a bit of time for assembly).”