did someone hack the ikea catalogue?

okay, i digress again. but this is too funny.

ted tipped me off on this bit of news that has been circulating in canada and the internet.

it seems, if you flip to the first photo in the 2007 catalogue you’ll see a photo of a young family lounging on a bed with a dog. 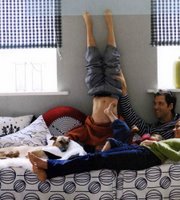 “the dog, which appears to be a greyhound or whippet, seems to have one distinctly human male characteristic, prompting some to suggest the image had been tampered with by a mischievous employee using a program such as photoshop,” reports ctv.ca.

according to ikea’s canadian office, that’s not the case. “the picture has definitely not been tampered with,” debbie mcdowell, corporate communications manager for the swedish retailer’s canadian office told ctv.ca.

she said the photo was shot in sweden, where the catalogues are put together. “we saw this particular photo when the prints came through here in canada. … but we can definitely say this is a picture of a dog’s leg, and it is not something else.”

what do you think? the ultimate hack? 🙂