no lack of creativity in matt’s media storage

matt’s apartment was first a gem of a flickrfind on apartment therapy. i was immediately taken by the media unit – a lack shelving unit with sliding doors. wow! just what i always wanted. then, a commenter (thanks jamie pup!) suggested ikeahacker to him. and the rest, as they say, is a blog story. 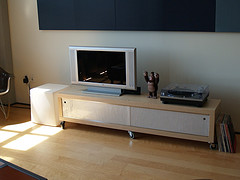 despite its good looks, the hack is not complicated. just follow matt’s instructions and you could have this beauty in your home too.

“i took out all the lack uprights except the center one – which I had to re-drill the center piece and install about 3/8″ back to accommodate the door rails. cut your aluminum rails to size, mine were 70.75”, but make sure and measure yours.

i also used metal polish on the rails so they had a nice shine. finally, screw the channel in place except for one end… slide the doors in and all the way to the other side and you’ll be able to screw the un-attached rail ends to the lack.

i chose a very cloudy (but still translucent) door and my remotes still work with them shut… not sure if a darker one would work as well, but might be fine.”

if you can’t get enough, click here to view a slide show on matt’s apartment.
[via apartment therapy]

Updated! February 25, 2009
Scott does one too!
He says, “With a six-month old getting into things, we saw the writing on the wall and decided to upgrade our Lack bookshelf, which we’d been using as an entertainment center.  I had already sanded and stained it to a walnut finish, in keeping with our living room. Along with some baskets that hold toys below from Pier One, I used the hack you had up last year, and added sliding doors. Even in Manhattan, finding aluminum u-channel wasn’t that hard – I did have to bring on the subway, though. The store lent me a hacksaw to cut into 2 pieces for transport. We used Tap Plastics for the doors, but had to order some samples before deciding on a color – this added about $20 to our total cost. This was much less than trying to find a new entertainment center, which would have been 3 to 5 times as much, I’m sure.” 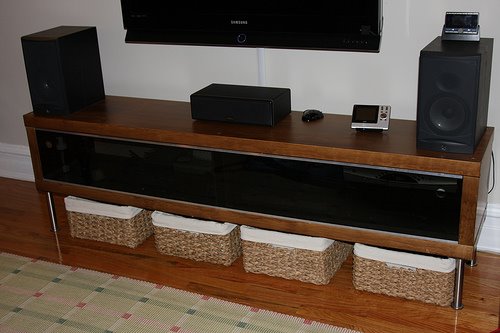 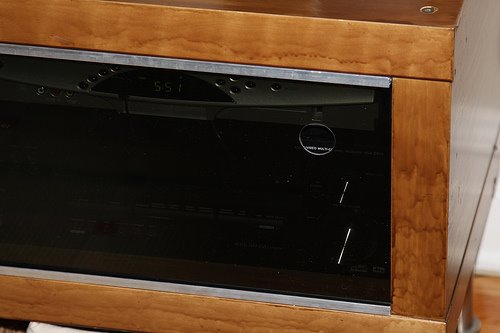 I think it came our really well. We use a RF remote, so the only problem was moving the center speaker on top. Much less clutter shows now and my wife likes is more than before!”