monica and michelle run fixchicks – the first online community for female diy’ers and the site’s loads of fun. it features some pretty interesting finds like the cupcake carrier, which i doubt i’ll see on a … er … “male” diy’er site. heh.

after seeing her ikea room makeovers, i wrote monica and asked if i could feature them, which i will, tomorrow. but first, some tasty appetizers. she sent me three to start, with the promise of more to come. right, monica?

they are pretty simple but i like them, because they do not need big-time sawing and drilling, yet makes an impact. 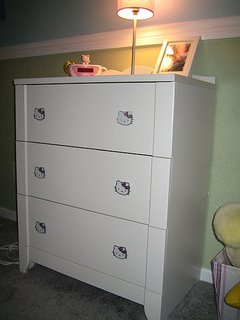 ikea stripa wall shelf as spice rack
ikea usually display their spice jars on the bekvam shelf but its not big enough to hold 10! so monica used the stripa wall shelf instead to display her collection, with room for 2 more. 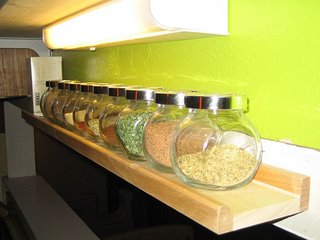 portrait wall: ikea stripa shelves + raket photo frames
the raket frames are one of the cheapest things you can find in ikea and monica got a bunch on sale at 49 cents. “then, i sized digital photos in photoshop, converted them into b&w and punched up the contrast a bit … printed them out on plain-jane-cheapie paper on my hp photosmart inkjet printer… cut to size, and whalla! i used 3 of the above-mentioned stripa shelves in white (like the one I used in aspen for my spice rack hack) to hold the framed photos.” 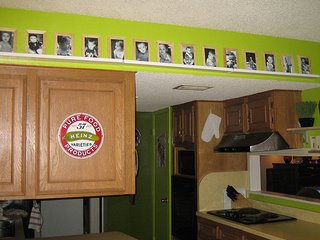 i do like them lined up against the green wall. gives such a warm fuzzy feel, doesn’t it?

for details on the hacks, go to monica’s post on ikea hacks.