don’t know about you but i’m just as guilty as the kersteins when it comes to tv dinners. so, i’m keeping this great idea for when my pax wardrobe wears out.

“some years ago, we purchased two ikea stand-up pax armoires – one a double wide and one that was regular width to provide more storage space for clothes in our small apartment. they worked great. well, eventually it was time to move and the small, skinny unit held up just fine. unfortunately, physics was not kind to the wider unit and it broke during the move.

not the type of people to give up on something, we decided that we’d reuse the parts. and reuse them we did. soon after moving in, we realized there was a lack of comfortable eating space upstairs in our rumpus room. sure there was the couch with the coffee table, but eating while watching tv was a bit messy.

so we came up with this: 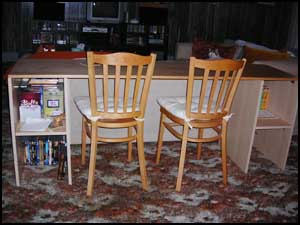 our answer to good old american-eating-while-watching-tv-goodness. the ultimate in entertainment hedonism. we have shelves on each side to hold dvds, videos, napkins, coasters and such. there’s room for two chairs so we can sit and eat as well. it’s perfectly placed behind the couch, so our mothers should be proud that we’re not sitting too close to the television.

some quick measurements, a circular saw with a wood blade, some brackets and wood screws-and we were good to go! the perfect life, or should i say, ikea hack.” link.