so, the furniture is hacked. it’s only fitting that it gets a new name too. just2cool posted a modified jerker table with a lack shelf propped up by capita legs. hence ‘jer-la-pita’, coined from the jerker, lack and capita.

“when i entered my junior year in college, i decided that i wanted a nice desk for my apartment – a lot of depth and width, but i wanted to keep the cost down as well. so, i originally looked at the jerker that came with a shelf, but felt that it wasn’t wide enough for my liking. then, i looked at the table-style jerker, but i didn’t like the fact that it didn’t have a shelf for the monitor. 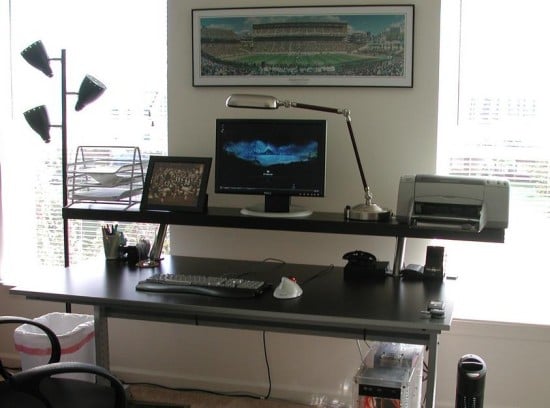 so, after spending some time at ikea looking at all kinds of crap, i noticed a nice shelf (lack) that was a tad bit bigger than the table jerker’s width. then, i saw 2 slanted aluminum legs (capita – couldn’t find the link to the slanted ones) that i felt would be sufficient to hold it up. and after drilling a few holes, the rest is history.” link.

neat. i think it goes really well with the set-up.