the ikea ordning cutlery caddy is an ikea item begging to be refashioned as a lamp. and jonas holmkvist aka zark was just the person to reveal its inner shine.

“i was at ikea a while ago to buy some stuff. one of the things i thought about buying was a lamp to hang in the kitchen window. i didn’t find a lamp that would fit my kitchen so i walked further to buy some other stuff instead. just when i reached the kitchen department i happened to see the containers for cutlery and got an “Ernst Kirchsteiger*” revelation: ‘i’ll build my own lamp!’ 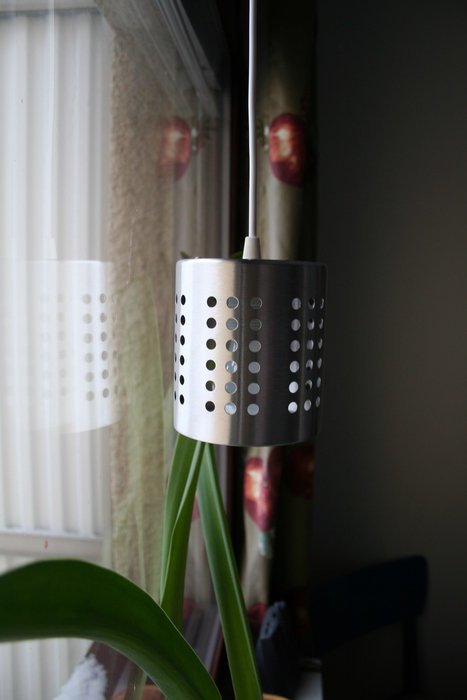 the cutlery stand happened to have a hole perfectly drilled in the middle of the bottom. it would have been enough to just pull the chord to the lamp through this hole and it would have been finished. but to be sure i drilled the hole to about 10 mm before i pulled the chord through…..” link.

*Ernst Kirchsteiger: smooth-talking, suntanned, barefoot embodiment of the swedish new man. while he’s famously in touch with his feminine side, the presenter of TV home makeover shows Nya Rum and Sommartorpet is equally at home with a power saw as he is with a sewing machine.

[bjorn, thanks for the translation!] 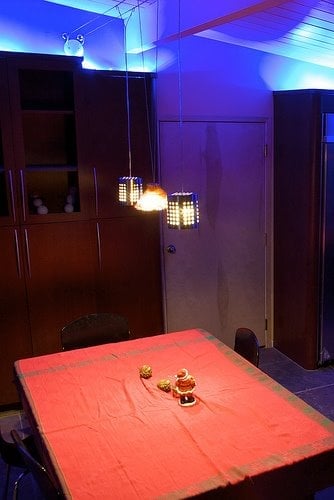 He says, “We happened to already have 12V cable lighting, thus no need to hack one of Ikea’s cable systems. However, it would be trivially easy to do.

As proactive as Ikea is with energy efficient lighting, I saw no sign that they offer low voltage LED or CFL fixtures, which is a shame. 12V MR16 (standard) CFL and, even, LED lamps are available at Home Depot these days. Quite common.

And the 12V cable lighting systems are extremely hackable. It is low-voltage and low-wattage, thus pretty darned safe. And IKEA provides about a zillion different random objects that can be safely turned lamp shades/fixtures when coupled with a relatively cool CFL or LED lamp.”