kid’s bed with a little cupola

caroll gets creative for her daughter’s bed.

“recently, i went on a big shopping trip to ikea, because my toddler needed a new bed. i was very disappointed in what ikea has on offer by way of kid’s beds: they are mostly toddler beds, which are too small for a kid who has already outgrown a crib. i like ‘modern’ lines, but can’t afford any of the furniture sold as modern, and much as i love the haba line of kid’s furniture, that was just far too expensive for me.

of the few twin beds ikea has on offer, the malm came closest to my style. but i wanted to do something to make it fun. i seem to remember ikea use to have some nice canopies and things for twin-sized beds, but i didn’t really see anything i liked until i spotted the korall anemon tent. i figured there must be some way to do something cool with it, so i bought it and brought it home to experiment.

after some fiddling around, i decided there was no way to use it immediately around the mattress to create a little hidden space at the head of the bed; it was too small and i had some qualms about the safety of that approach in case of a fire. so i decided to cut the bottom out and suspend it from the ceiling, like a little cupola. 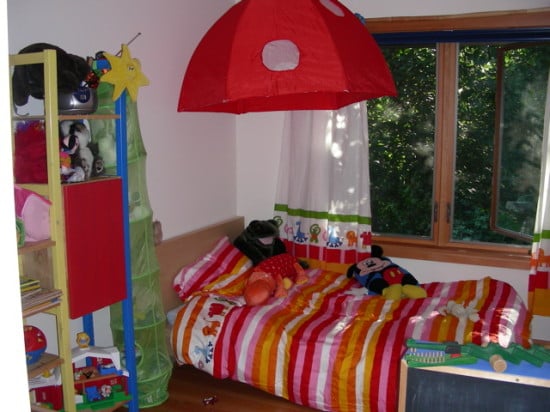 my daughter just loved it! i just hung it from a hook in the ceiling, so that we can take it down and play with it when she wants to. i took the velcro strap off of it and sewed that into a loop to hang the tent by. i was originally going to sew up the opening side of the tent to make it look tidier, but since we like to play with it, i’ve left it closed with just the velcro patches.

after a few days, i thought ‘wouldn’t it be cool if this had a light under it to make a cozy place to read our bedtime stories?’. i just suspended a basisk pendant lamp from the same hook, pulling the cord through the side slit in the tent. 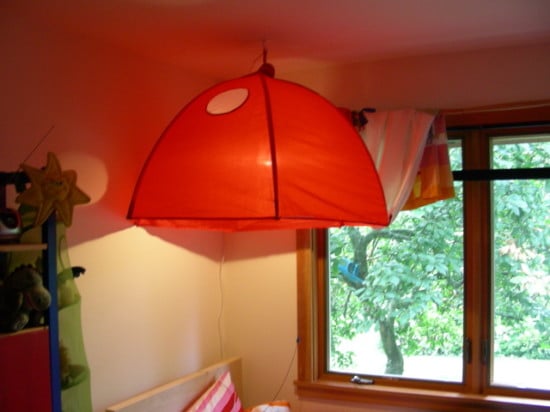 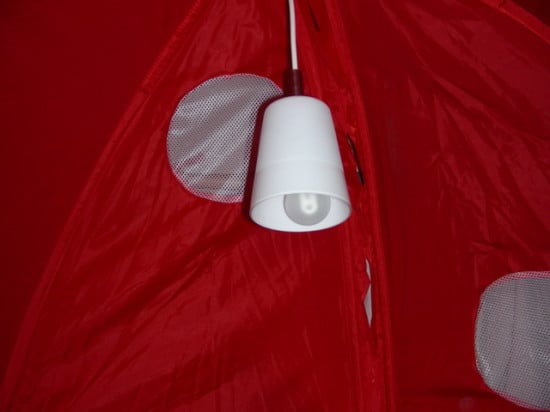 we plugged the lamp into a dimmma switch. my daughter just loves it too.”