use lack shelves to add storage and interest to a room

cathy makes good use of the lack shelving units as storage and room partitions.

“we wanted to use lack shelves in the kitchen so that they could act as a food pantry, but had limited wall space. by using red polycarbonate sheeting as door fronts, we were able to position the shelves partially in front of a window, so that they admit interesting afternoon sunlight through the doors. the polycarboate was a manufacturer’s offcut, sourced at a local recycling outlet reverse garbage, west end.

the red doors are attached with standard cupboard concealed / self-closing hinges, which are recessed into the lack board (drilling a hole using a big drill bit) and fixed on the door side to the timber door stile (screwed to the polycarbonate in pre-drilled holes). actually, how to attach standard door hinges is the ongoing problems of working with the lack board material – the laminate on the honeycomb cardboard core – because the hinges are really designed for solid material. also, the polycarb is brittle and can snap, especially when knocked against something in the cupboard! 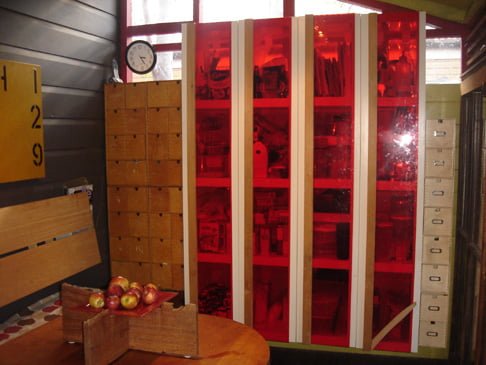 we have ideas about how to easily make the door handles, but at the moment, there are no handles and we simply open the door by pulling the plastic, which is not ideal. but i still like the polycarb effect regardless of these challenges! also seen are ikea plywood storage boxes (no longer available?) fixed to the wall. 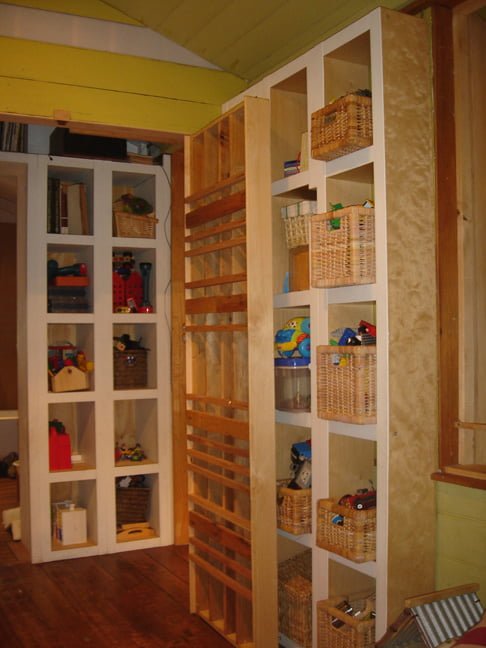 another lack deviation relating to limited floor space can be seen in our bathroom partition wall made of four ikea lack bookshelves. we had difficultly finding enough wall space to accommodate these shelves, but desperately needed the storage space for toys and books. when replacing the original termite-eaten, non-structural bathroom wall, we were able to use the shelves to act as the wall instead of creating a timber stud frame. we also painted the shelves white because we had accumulated shelves in non-matching colors and finishes. the cut half-lacks can still fit ikea branas baskets!