save your old chair with a new look

a pretty one from holly.

“this one is really simple, but turned out to be quite a task. i took this rolly chair (svenning) and punched it up a little with some fabric from JoAnn’s. when i bought it in 2003, they offered a camo option. now that i’m married and decorating my first home, it needed a softer touch to match the rest of the office. when i took the chair apart, there were about a million staples holding the camo fabric around the pads. prying the staples out of the plastic was tough, but not as tough as stapling the new fabric back on. it took me about 20 minutes to find the perfect way to hold the staple gun against the plastic so that the staples wouldn’t just bounce off. in the end, i had one very sore hand and one very pretty chair! 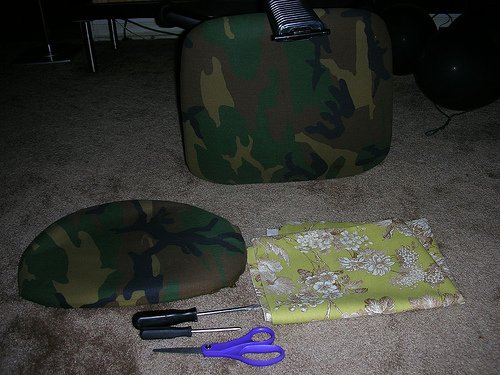 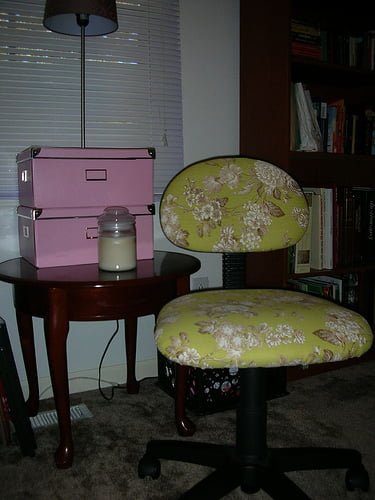 Updated! February 25, 2009
Reupholstery with Patricia fabric
Ruby saw the Kip chair and was inspired to do her own.

She says, “I was given an old office chair by my father that was still in super condition, except for the cover. After living with it for months wondering how I could make it look better, I decided to ‘hack’ it with some nice fabric. The only thing was, it had to be really cheap and that’s where Ikea came in: some lovely Patricia fabric! We used the patterned dark grey. 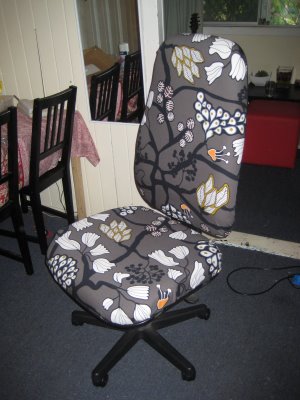