Likkitp’s TV stand has been hacked twice. I can’t figure out how the original one looked or know its name. Perhaps you do?

He says, “I hacked my Ikea TV stand/entertainment center twice – when we first bought it (2005) I mis-measured the height between the TV shelf and the next shelf located above the TV area. I had to drill new holes for the bolts and raised the upper shelf to fit my 50” TV. Two years passed before I thought to hack it again. Then about 2 weeks ago I decided that I needed a less cluttered look for my entertainment center – so I cut the tall posts that held the upper two shelves down to a ideal height for tv viewing and reused the cut portions of the posts into shelf support/dividers. Ultimately I left one of the upper shelves off with the payoff being a lot less clutter on or around the TV area. Behind the TV for ambient lighting I have one set of Dioder lighting strips attached for a nice glow during TV viewing. 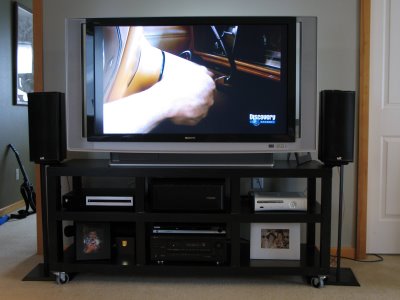 But here’s my issue – my wife and I bought this TV stand in the spring of 2005 at Ikea Seattle – and I have no idea what it is called. We only saw it the one time we went shopping for a stand and never saw it in the catalog. Anyone have an clue?”