This is from Ran, who wanted a big, low coffee table, but couldn’t find one that fitted the two requirements. So he hacks one from Lack shelves. I love the size and the white strip. It would work great with Capita legs too.

He says, “I thought about using a desk surface and adjustable feet, but finally I had the idea of using the Lack shelves – they are cheaper and come in better colors. 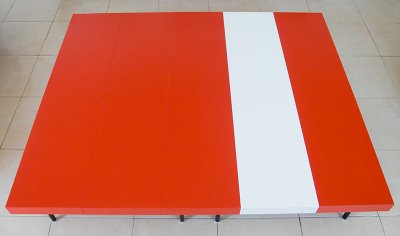 I made this from the Lack shelving. I used five shelves as the surface and the wall mounts were used as legs. The small white foamy things at the bottom are also from Ikea – I don’t remember their name though.

It isn’t a very clean hack – I could have done a better job with putting the surface together, but I just used two pieces of scrap wood I found in the trash outside my apartment and some wood glue, and used about three different kinds of screws for the mounts cause I didn’t have enough of any one kind. It’s short enough that you can never see the bottom unless you crawl under it, so it doesn’t matter. 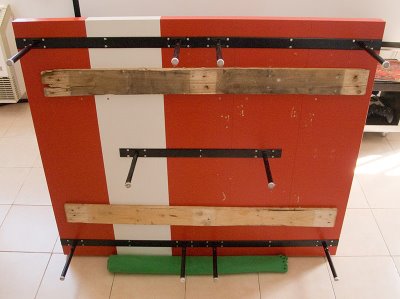 The final result is quite nice though – it’s fairly stable and quite cheap considering how big it is. While it’s not as wide as some coffee tables I saw, it’s much deeper and that’s harder to come by. Since the Lack shelves come in many colors (at least in Israel they do), there are a lot of variations you can make with this setup.”