Béatrice helps her friend Michelle kitty proof her kitchen. Well, adopting a stray cat does have its consequences.

She writes, “Recently, my dear friend Michelle adopted a stray kitten, named Kurutchan (the little black one in Japanese). However, I soon nicknamed her Little Monster, for there’s nothing Kurutchan loves as much as sending things into the air…. especially at 3 am in the morning!

So after Kurutchan had gleefully broken crockery, bottles, jars of homemade jam, etc… even my friend admitted that open shelving in her kitchen was not working anymore. Since her kitchen is not that big, Michelle and me (as her long-time DIY partner in crime) decided that the usual kitchen cabinets would not fit.

In a fit of inspiration, after flicking through the Ikea catalogue, we decided to use a bookcase since the depth is only 28cm. The Billy bookcase seemed perfect, but as it’s only 40 cm wide, it wouldn’t have provided much storage, so we decided to buy 2 and to put them side by side. Then, to make sure you-know-who was not going to go in, Michelle bought 2 Billy Byom doors.

On our way out, we found a Gruva lamp in the As-Is section, and because lighting is important in a kitchen, we decided it would be a nice touch to put it on top of the new custom kitchen cupboard.

Around the same time, Michelle was given a glass door from an older Ikea kitchen cabinet, which was great because a glass door would be both “cat-proof” and light. Because we thought it would be nice to have similar knobs, we carved one in a bit of wood: a first And a success! It took us about an afternoon to put everything in order, and about 15 minutes to paint the door and the new knob white. We were both very pleased with the result!

Kurutchan loves her new crow’s nest, and fewer things get broken these days… Michelle and her cat are now going to enjoy their new kitchen together.” 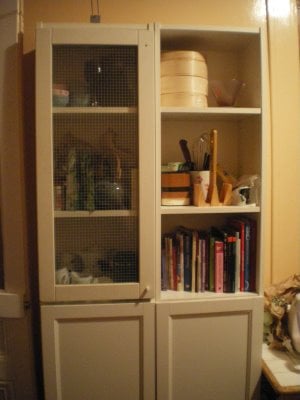