Divide your room with lights. This one is from XedMada. 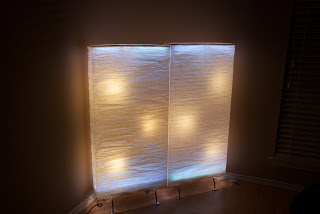 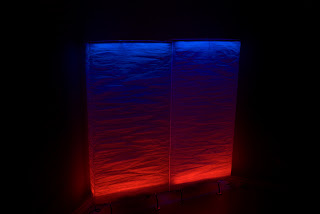 “It’s quite simple really, for each unit you need just one Orgel paper lamp and one Dioder color LED unit. Take two of the bars from a Dioder LED kit, gently slide them under the bars on the top front inside of the paper shade of the Orgel paper lamp shade. Be careful not to poke a hole in the paper. 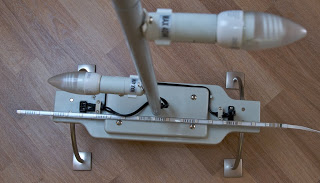 It’s easiest to slide the bars in one at a time then connect the two in the center and the power cord at one end.  Install the shade, again, careful not to rip the shade. The bottom bar just slips in from underneath once you have the shade installed and rests on the bottom inside against the lamps power supply.  A little double sided tape helps you keep it in place and properly focused. Run the cord of the top LED bar to the inside supporting pipe and down the back so it doesn’t cast a shadow.  In the photo I have two side by side, using one Dioder controller for the top colors and a second set for the bottom. Using the mini CFL replacement lamps I was able to meter a safe load of 5 of the units in one series (the box says only to use three in a series, but that’s with the higher draw tungsten lamps.)

An important side note: If you plan to use multiple LED sets together make sure to buy them all from the same batch.  Even a week later was long enough for me to get a different run of LEDs that didn’t quite match the color of the two sets I purchased previously.”