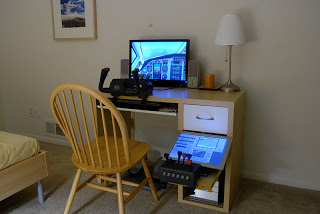 “I moved across the country and did not bring any furniture with me, only belongings. I was looking for a desk to house my computer, but had some criteria. I like to flight sim on the PC therefore I had a yoke and throttle unit that I had to accomodate. Also, the yoke and throttle clamp onto the desk in such a manner that if there was a lip on the front edge of the desk it does not clamp well. I also didn’t have too much room and did not want a huge elaborate solution. In addition many dedicated gaming-desk type setups are quite costly compared to the price of what I got. Compactness, simplicity, and ease of assembly/modification (no access to a workshop here!) were important to me in my choosing. I spent quite a while at the nearest Ikea until I thought up the following solution:

– The desk pictured is the Mikael computer workstation.
– I merely assembled the bottom half of the desk as instructed. I didn’t want the top pieces, however, because I like to have a lot of open desk space I just left the top half off. The thick, lip-less pieces of the desk surfaces provide ideal clamping for my yoke and throttle.
– To accomodate the throttle quadrant in a “realistic” position, I merely took the very top piece (with the filing “stands”) which fortuitously is just about the same width as the CPU cabinet. Therefore, simply taking that piece as a large plank and installing a few L-brackets in the CPU cabinet I was able to get it to stick out as a platform on which I could mount my throttle.
– I used a total of 8 L brackets, four installed in the “L” shape and four in the “7” configuration. This means the plank is not held into the desk by screws, and can be easily slid out if you need to for example access the computer, or want to store it away for a neater appearance. Now that there are two monitors on my setup I don’t really pack it away anymore though.
– Since my PC is a small form factor it is low and fits perfectly in its little “cubby” on the bottom. If I had a bigger tower I don’t know that this hack would work.
– Later on I purchased a larger monitor and moved my old LCD down to the platform as a secondary display, providing further realism to serve as a second “instrument panel”. You can see that the secondary monitor is bent far down enough such that you can pull out the desk and access the contents with no interference issues. As the monitor is pretty easily adjustable I can stand it straighter or fold it down depending on preference/need to get into the drawer. 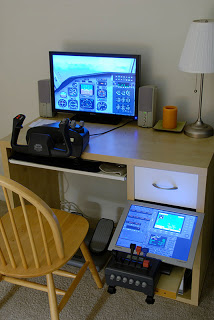 As far as cable management goes, because the pieces of the desk are quite thick, I bought some of the Ikea cable tubing and nailed it to the rear of the desk. Therefore all the cable runs kind of follow the contours of the desk on the rear thus you can’t really see wires if you’re looking at the desk despite the fact that there is no backing material to hide cables behind.

Like I said the hack is absurdly simple, especially it only requires 8 L brackets in addition to whatever you get in the Mikael pack.

In all I found it’s worked out quite nicely, I get enough desk space on the top surface and have a great little compact but very effective flight sim setup. The “correct” positioning of the throttle levers helps increase the immersion factor and the secondary monitor there adds to the experience as well. In reality I found the Mikael workstation (without the top) to be a great compact computer desk for any need. I admit that my little modification might not have a lot of use for a lot of people but I’m sure in typical IKEAhacker like fashion others might find inspiration to expand on the concept… Something similar would probably work well for people who have racing wheels on their computers as well.”