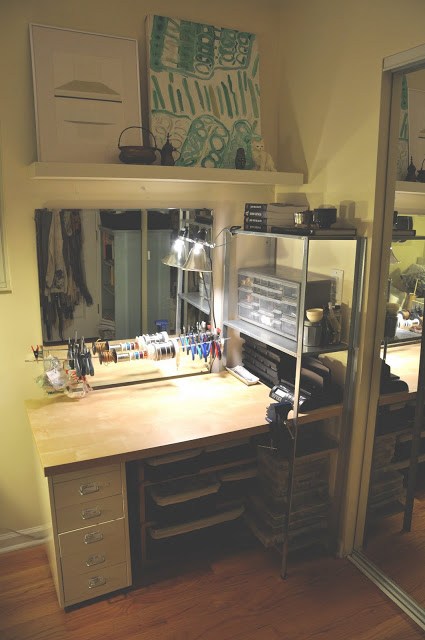 Description: I design jewelry and work from my bedroom, where I already have a huge Vika Gruvan desk, an overflow of bookcases and no extra room to spare. So this action-packed little corner was pretty much my only option.

I also had no cash at the moment (Hey, not all of us can be Tiffany) so buying brand new furniture was out of the question, all the Ikea items I used were bought on Craigslist. I think I spent less than $40 total including hardware.

Here’s the steps so you too can do the jam:

First, I assembled the Helmer drawer unit. Then, using its height as a guide, I attached the L shaped brackets to the wall. (As you can see in the picture, I used some left over curtain brackets from another project to keep costs down.) 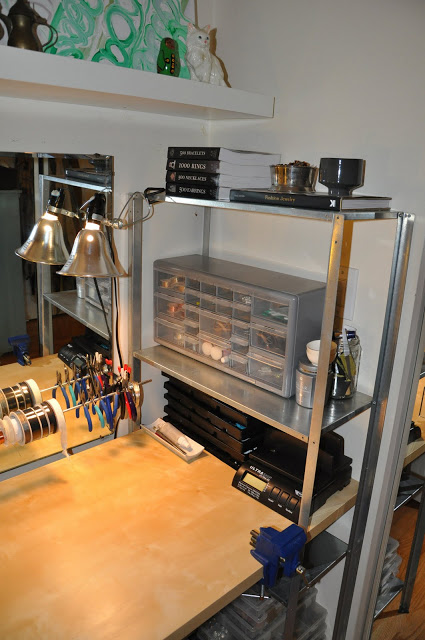 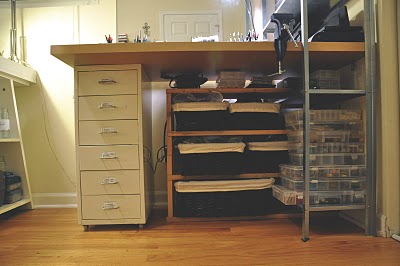 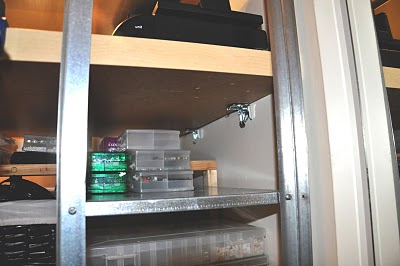 Next, I assembled the Hyllis shelving unit. Here is where I had to work some magic. The table top is wider than the shelves so in order to slide it in place without having to cut the table down to size I had to invert the Hyllis’ legs. This seriously compromises its stability, so I had to anchor it to the wall. After that, I slid the table top in place and secured it to the brackets with screws.

Then I hung the mirror (No, I’m not -that- vain, I just need to look at my work!) and the Lack shelf. As an extra bonus I installed a wire/tool dispenser made of L shaped brackets and a steel rod (Costs $2.50 to make). Since I still needed more shelving I added the shoe racks underneath the table. I bought two of them and stacked them, going under and around the Hyllis unit, then secured them with screws.

And that’s pretty much it.

Hey, it is not the sexiest of units, but it works for me. Plus it was $40 bucks. Beat that.