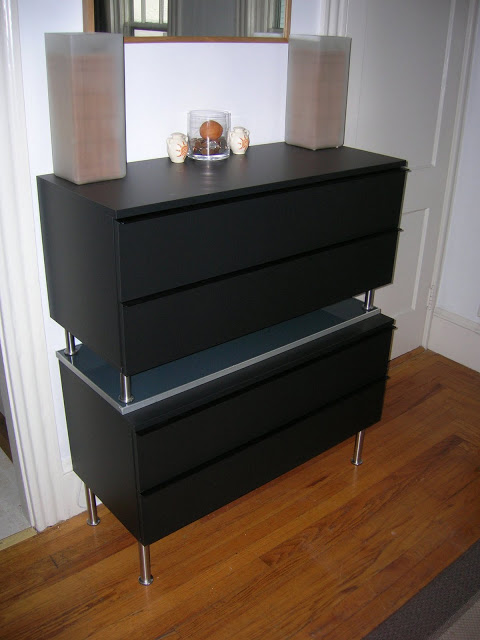 Description: My roommate and I were looking for something to use as a sideboard in a space in our dining room, and obviously wanted to go the Ikea route to flow with the rest of our apartment, but were having some troubles. We wanted something that would provide lots of storage but wouldn’t be too big depth-wise.

While perusing the As-Is section, we happened upon two identical, brand new condition Ãnga pieces. They were already assembled, but we determined they were brand new because they still had the protective film on the surfaces. Originally these cabinets are $120 each, but we found them for $40 each.

Since our apartment building is an older building, we didn’t think that the walls would be capable of supporting the rails necessary for the actual Ãnga system, so we opted to make a free-standing unit, and bought a set of the 8″ Capita legs… seemingly the simplest go-to pieces for hacking something that you want elevated a bit.

We weren’t really interested in the standard look of 4 straight doors, which would look like a dresser so we purchased a set of the 4″ Capita legs in the As-Is department for a couple of dollars as well. I had a grey-blue Rubrik cabinet door from an old hack I did, which fit perfectly on top of one of the cabinets, upon which we put the other cabinet. Having the Rubrik door in between the two pieces gives it a little differentiation, a subtle addition of colour and with the metal edge, ends up tying them together as well. 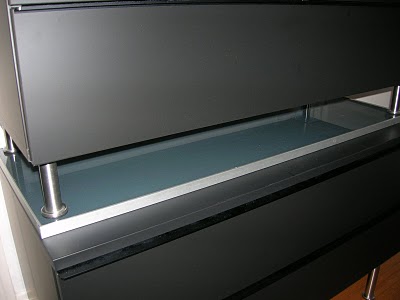 Even though this is just a simple “add Capita legs to something” hack, we took pieces that are meant to be mounted in a different fashion, and used them for a different purpose as a dining room sideboard cabinet, rather than an entertainment centre on the rails they were intended for. 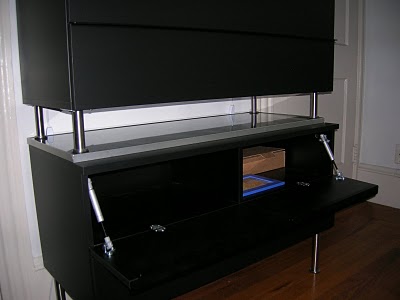