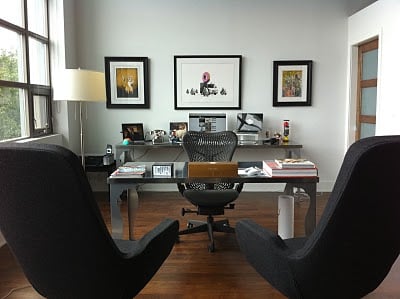 Description: My objective for my home office was to have two workspaces. One with a computer on it, and another that I could turn around to use that would be free of clutter.

For the clutter free workspace, I wanted as big a table as possible, so I went with the large size Vika Hyttan with the Vika Fintorp legs which is assembled according Ikea’s instructions (no hack, although you do have to drill holes for the legs for some reason).

For the computer workspace which would be against the wall I wanted for visual and functional reasons one that was wider and not quite as deep. Such a tabletop doesn’t currently exist that would match the other one I chose.

So, I decided I wanted to combine two small table tops to make a workspace that would be the size I wanted. 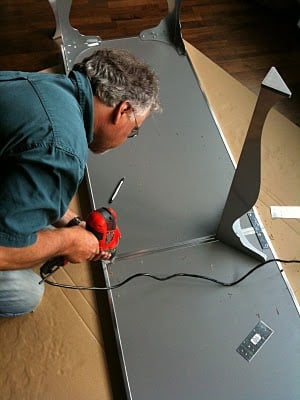 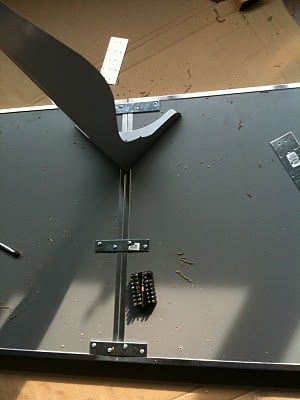 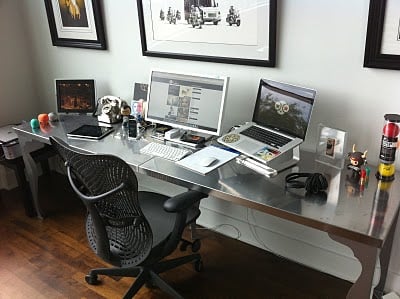 To do this, I enlisted the help of my father who is much less inept with tools than I am. He also has a drill.

1) We put the two table tops upside down on the floor side by side.
2) We installed the leg first on the join as shown by marking where the holes should be with a pencil and then drilling the holes. We placed the leg the way we did in order to have as much support as possible in the middle of the joined area. You have to be very careful in this step to make sure that the tables are properly lined up.
3) We installed the brackets I bought from Home Depot the same way.
4) We double checked the tabletops were positioned together perfectly and then tightened all the screws.
5) We had a couple of cold brewskis and admired our work.

Because the table tops are so thick, in order for downward pressure to break the join it actually would need to pull them apart first which it’s far too solid to do, particularly with the added support of the leg across join. Although I wouldn’t dance a jig on the table it is perfectly solid and doesn’t move around at all. 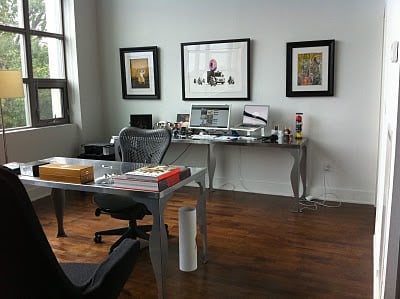 I also think it looks great, and functionally it’s amazing. Perhaps one day Ikea will release a wider/thinner version of the Vike Hyttan and render this hack obsolete, but for now this makes for a pretty cost effective, attractive, and functional office set up.