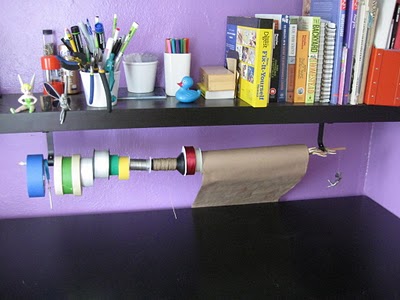 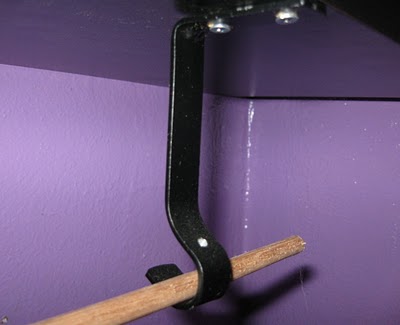 Description: I had a problem finding a storage and dispensing system for miscellaneous craft spools. My goal was to have spools I use often enough readily available and easily accessible without being in the way.

I had purchased curtains and curtain rods when I first bought my house because my neighborhood is really active. The previous owner had left their curtain brackets up and they just happened to be the size for the BESKADA curtain rods I had purchased from IKEA.

When I needed a solution to my spool storage problems I remembered that I had the brackets and a thin dowel left over from some other random project.

I was already installing the LACK floating shelves in my office over my craft table. I drilled shallow pilot holes in the LACK shelf and screwed in the BESKADA brackets. There’s no real science here. I eyeballed the bracket flush to the front of the shelf and held them in place while I drilled the pilot holes. I just made sure that the brackets were closer together than the total length of the dowel. Also, when I put the brackets on I put the open part of the bracket facing backwards so they can’t get pulled off when you pull something off the table.

You have to be careful with LACK shelves because they’re mostly hollow. I wouldn’t suggest using the brackets for anything much more taxing. I looped the various spools I use over the dowel and placed it in the brackets. It took an extra ten minutes in the installation of my LACK shelf. In retrospect I would have left more room on the ends for the tape rolls and scissors (put the brackets closer together). It would have also taken some stress off the dowel.

This project didn’t cost me anything. I already had all the pieces. You can’t buy the BESKADA single wall brackets. You can, however, buy the double wall brackets in a two pack. You could either make a two tier spool dispenser (how sweet would that be?!?) or you could IKEA HACK – saw it into a single bracket.

This spool dispenser met all my needs. It is within reach â€” right there over the shelf. It is easy to use – just pull whatever material you need and cut accordingly. It also stays neat. There’s little chance of getting these all snarled up.