Waooouu! How did you find a TV that fits perfectly with Besta? 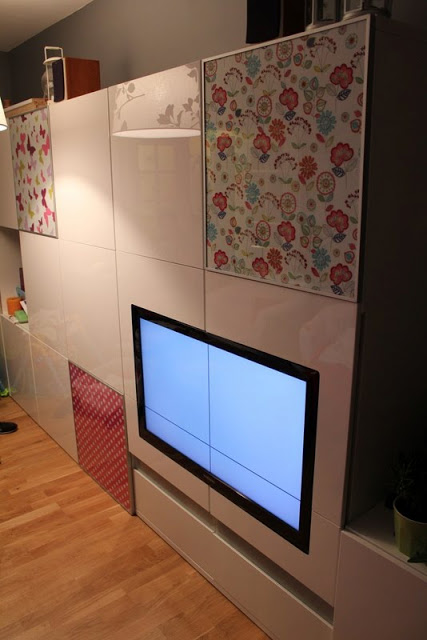 Description: “How did you find a TV that fits perfectly with Besta?”

It’s surprising, but I actually heard many times friends asking me that when looking out our media center installation.

At the beginning of this project, my girlfriend chose the Besta at Ikea and told me that it would fit well in our living room, with plenty of storage place. Fine, but I found that all the TV frames sold by Ikea were ugly and did not provide adequate hiding for all the mess involved with the rather “DIY” style I have.

Then I found the idea of using the Besta TV element, devised to go with sliding doors, but with opening doors, cut to size. My goal was to have the TV included in the neat surface of all the white gloss Besta doors. I also wanted to have access to the back side of the TV, for easier cable modifications. At last I wanted to spare some of the space behind the TV for storage of electronic stuff…

I ended with the solution displayed in the pics. 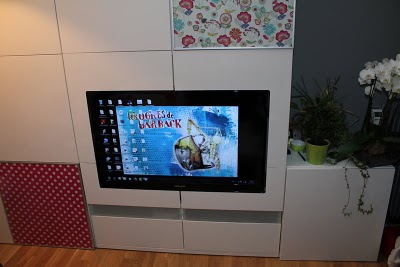 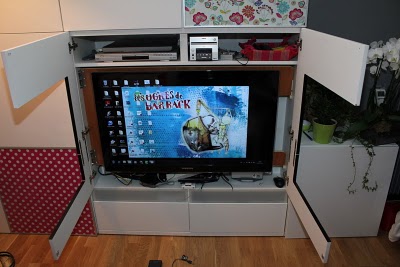 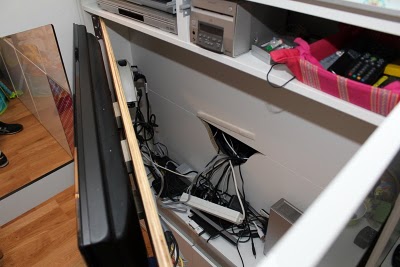 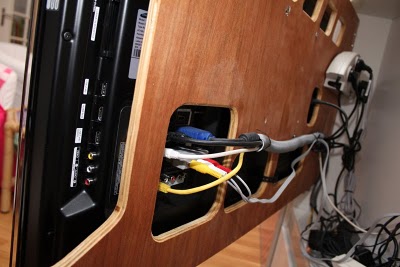 Installation steps:
– cut a thick (15mm or so) plywood sheet to hold the TV set, with holes for venting and cables access;
– install it in the Besta, keeping in mind the depth of the TV set, so that everything aligns at the end of the trip;
– hang the TV on it. down to the knees, small prayer, everything holds!
– cut the doors to match the size of the tv set. I used first a jigsaw for the rough cut, but for a perfect look, I used a handheld router with a copy bit, with a metallic rule as a guide. I am pretty satisfied with the final result (that was a challenge which my father and brother told me “you’ll never have a straight cut on Ikea”. Then I added a finishing black liner. I do not mention all the adjustment back and forth steps.
– install doors with a bit of adaptation, since it is not designed for that…
– close everything and enjoy!

Final steps:
– Wait for the reaction of friends.
– Take pics for ikea hacker
– Pray your TV set do not die, you’ll probably end up cutting a new door, and that’s painful.