Ribba with the Dynamic Painting 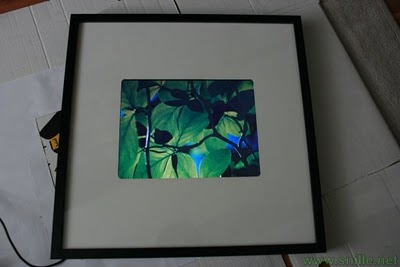 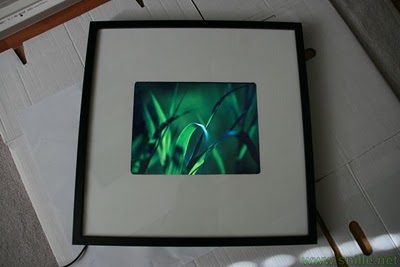 Description: I used the frame called RIBBA with the size 50×50 cm. There are two models either black or white frame. I selected the black frame for this.

Then as you can see, the inlay have a rectangular cutout and that of course does not fit the laptop screen. To fix this I bought a very heavy paper-sheet (1000g) It’s like cardboard, but it’s white and stiff 50×70 cm sheet. 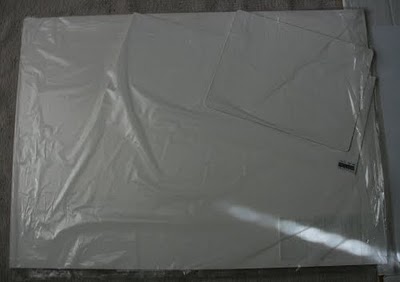 The I had an old laptop that I don’t use anymore. The battery is completely broken so it can only run if the AC-adapter is always connected. It’s an old Thinkpad T42.

Now, we have all the parts lets do it!

I started with installing the latest Ubuntu Desktop (at the time of writing this was Ubuntu 10.04).

The script that changes the wallpaper after a defined amount of time also has a one minute delay at start before it changes the picture. This script starts from Startup Applications, so one minute after the automatic login the wallpaper should change. Then you know everything works. 🙂 (Remember to edit the scripts to set your pictures path.)

The script that changes the wallpaper directly I just made a launcher for in the hidden panel to be able to change the picture whenever I want (via VNC).

And the two monitor scripts, I use two cron jobs to run at specific times. One at late evening to turn the monitor off and one in the early morning to turn it on again. I think that’s it for the software part…

You can start with removing the battery. I leave the battery out period for this. The battery is one thing that can happen bad things with, and you really don’t need it anyway when you have the machine mounted in the frame. You will need to have it connected to the AC-adapter.

Then remove the hard drive. This you will need later on.

I also removed the CD-Reader. You don’t need it any more.

Then turn the computer over.
To be able to turn the screen completely around you need to remove the hinges (and also to fit in the frame all the other screen covering). Basically you need to unscrew all the screws you can find on the underside of the laptop. To be able to figure out later on where each screw should go, I took a photo of the underside of the machine and printed the picture. Then after each unscrewed screw I taped it to the correct place on the picture. Very handy later on.

When all screws are removed (remember, there are hidden screws under small black patches, and don’t forget the one on the screen…), turn the computer again and carefully remove each part of the cover. Start with the black list at the top of the keyboard. I will not go through every step, I’m sure you can google it. 🙂
When I was done, this was what I had removed.

Now cut the paper-sheet to the correct size and measure where the screen should sit.

Then I used double-sided tape to hold the screen in place. 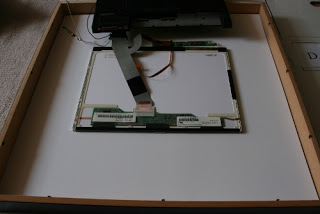 Then I cut small wood parts to hold the laptop in place on top of the screen.
Under each wood part there is a piece of double-sided tape to keep it still.
I also taped the small wires for Bluetooth and WIFI. 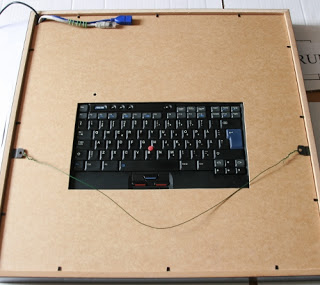 Now you will need to make a hole in the backside of the frame. You actually don’t need to do this, but if something goes wrong it’s quite handy to be able to type or move the mouse. I also made sure that I have a USB connection and just in case a LAN-cable connection on the back. You never know. 🙂 Also I made a small hole for the sleep button. You can see it just above the keyboard to the left. It is this little button the lid presses when you normally close the lid.

Well… Turn it over and start, wait for a minute and you should see your nice picture. 🙂

There is of course a million things you could add to make it more fancy. But the whole concept of this frame was to give the viewer a “calm” impression. This is why I only change picture every 4th hour. We don’t want it to be a slide show that you stand and watch, it should be a “dynamic painting”. I also tried a bit with weather information using screenlets. But, then again it should feel like a painting, so I removed them again. 🙂 What I am thinking of is to install some voice activated commands, maybe for changing the picture and so on… But I’m not sure yet. If you are interested in voice commands, the best free software I could find where Simon.

Ps: The computer is quite heavy so I actually added small metallic corners on the backside of the frame. I noticed small gaps appearing in the frame corners some days after I had mounted the painting on the wall. So I decided the re-enforce the corners a little bit.

You can find the whole project documented on my homepage as well.

See more of the Ribba frame with dynamic painting.