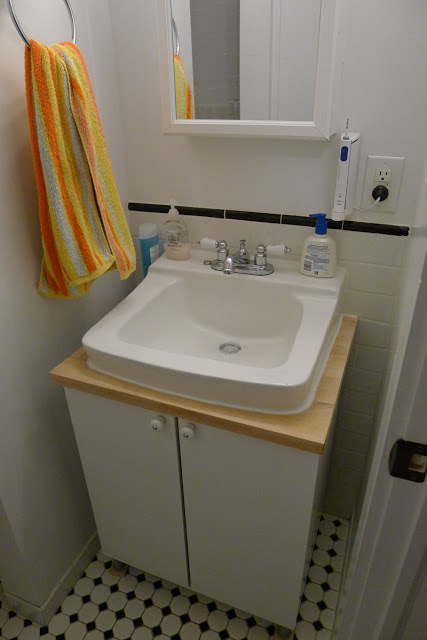 Description: My family and I recently moved to a new apartment. We brought with us a 3 year old Bekvam kitchen cart that simply did not work for our new kitchen. Rather than sell or throw away the Bekvam, I decided to make use of the wood and hardware.

Our bathroom had a sink mounted on the wall with no storage underneath. This was a problem for us, so I decided to go out and buy a new Fullen cabinet. Fullen’s do not have tops, but the top of the Bekvam was just the right size. Using my Rotozip tool, I cut a large “U” shape out of the Bekvam top, sanded it down a bit and attached it to the Fullen using a couple of angle brackets. I finished it off by sealing the gap between the wood and the sink with white silicon.

There’s an odd gap in our kitchen between a couple of built in closets/cabinets. It turned out that the two Bekvam shelves would fill that gap perfectly. Using a few mending plates, I attached the two shelves together at the bottom and then attached them to two new Ekby Valter angle brackets. After mounting them on the wall, we had a new home for our microwave. 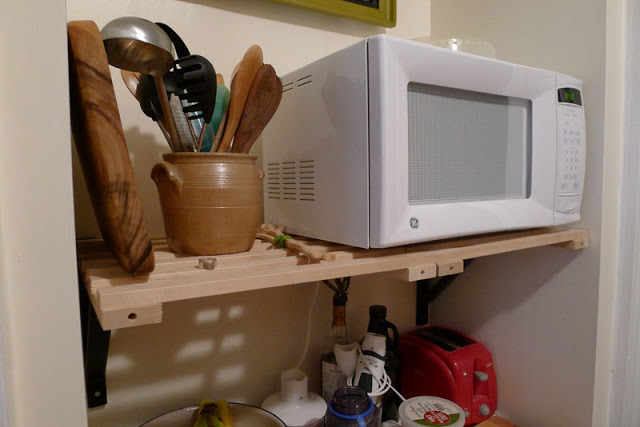 I was left with the Bekvam legs, part of the top and the apron. Using my circular saw, I cut the remainder of the top into two rectangles, which became the new top and shelf. After trimming the Bekvam’s apron pieces down to size, I attached them to the new Bekvam top using the original hardware and reattached the legs (which were also shortened by 6 inches). Using a band saw, I cut rectangular notches out of each corner of the new Bekvam shelf, stuck four old wooden dowels in the existing holes in the legs and rested the new shelf on top. We now had a new end table and cat perch. 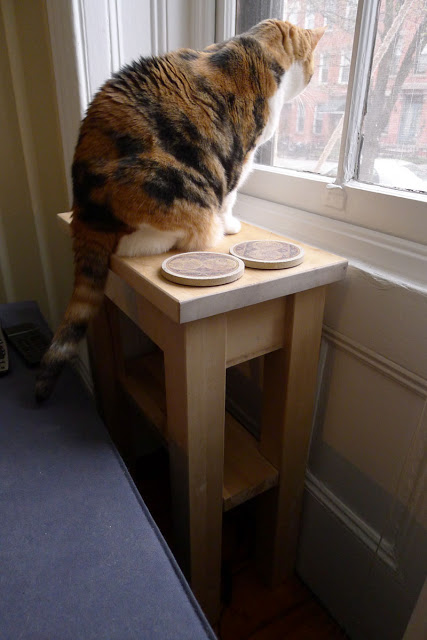 Overall, I’m quite pleased with the results. I’ll probably end up painting the table, but for now, it’s fine as it is.