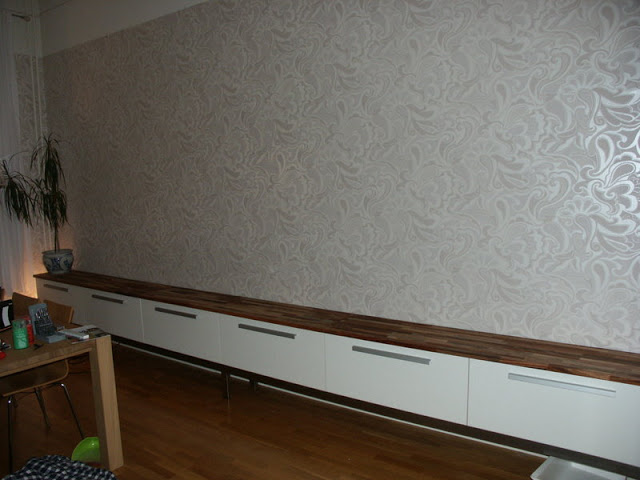 Description: Before we moved to our house we lived in a very beautiful apartment witch was housed in an old school built in 1900. Our apartment was built in the old music study, with big windows and since it was an old class room the living room/kitchen was very spacious.

The only problem we had was that the kitchen part was a bit small and that there were not a lot of storage cabinets.

Since the room was very big I had a 7 meter long wall which I could use for storage. Initially I wanted to hang some kitchen cabinets on the wall but after some investigation I dropped this idea because the wall was too weak.

Instead I decided to get a base-frame welded and put the (in my case IKEA) wall cabinets onto the frame. 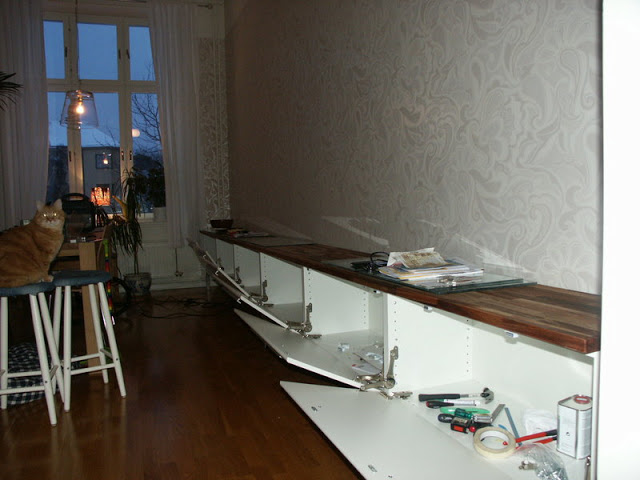 I wanted the whole furniture to be as floating as possible since I couldn’t hang it on the wall so I designed it to be a bit industrial with an (in my mind) oversized dimension steel frame and just 3 pair of legs. Later in the project I realized that the dimension of the steel was not oversized at all, because of the wide gap between the legs and the weight of the stuff in the cabinets the dimension was good. If you then add the weight of the people that used it as a bench to sit on I realized I should have gone even more industrial. 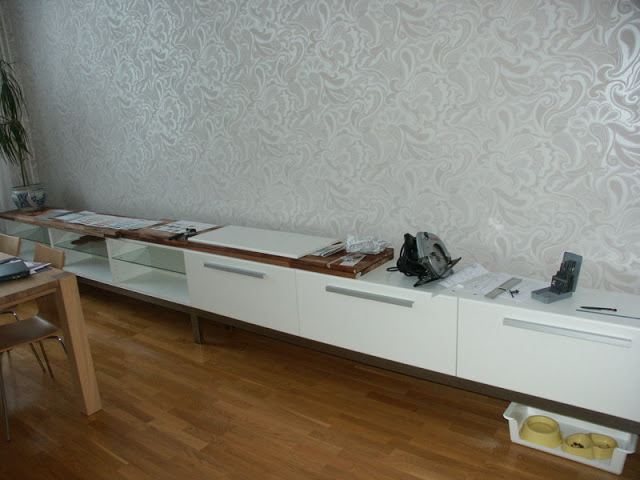 I purchased 6 “Faktum” wall cabinets and doors, since I had a long wall I choose the 92x40cm one. As seen in the pictures I put the wall cabinets upside down so that the doors opened downwards. The cabinet had a door lift for “gentle closing” which had to be inverted since the cabinet was installed upside-down.

The first one was a bit tricky but if you just open the tightening screw enough you can adjust it so it will work inverted. DO NOT disassemble the unit totally! After this modification and some fine tuning the door will be hard to open (It will stay in half open position and not drop by itself breaking the hinges), and very easy to close. As an addition I mounted some magnetic locks to that the door and cabinet so that closed tightly.

When I started this little project I wanted to have a solid wooden top on the cabinets but I quickly realized that the cost would be too high. Also I think it would be almost impossible to get that piece into the apartment. So in the end I had 2 workbench/kitchen bench tops cut in half and used 3 of the 4 parts.

I choose the same type of top as I had in my newly renovated kitchen and also the same handles.