Biggest Expedit Hack Ever – Mechanised wall of shelves for a stage production of "I Love You, You’re Perfect, Now Change" 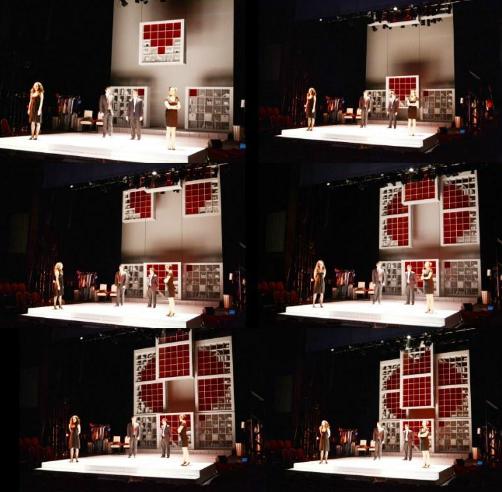 Description: So this is probably the biggest IKEA hack ever – a 6m x 6m wall of EXPEDIT shelves that I designed for a local stage production of the Off-Broadway musical comedy “I Love You, You’re Perfect, Now Change

To those unfamiliar with the show, it’s a sketch-comedy-style musical where 4 actors play over 50 characters in 20 scenes about love, dating, sex, marriage and parenting. While this show typically plays in smaller venues with little or no set, our production needed to look grand enough for a 600-seater venue with full stage technology, but with a very very limited set construction budget. 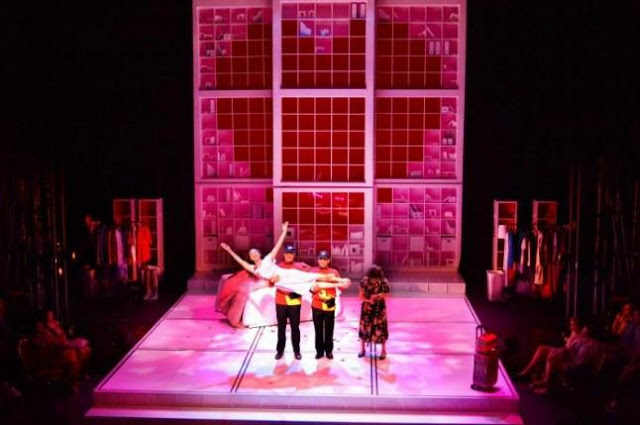 My design solution was to create an all-encompassing square gridded world of sleek white EXPEDIT shelving and all white furniture, where each scene could be suggested by re-arranging some shelves, furniture and some quick costume changes. This fit the premise of the show perfectly – after all, what can better describe the typical experience of a cheap college date, a young couple’s first apartment, and a family with young kids dealing with an avalanche of toys than IKEA! (And no, IKEA did not sponsor us at all.)

The backdrop itself was designed as 9 units of 5×5 grid EXPEDIT shelves, reinforced with a timber frame all round, and rigged in separate groups to the mechanised flybar system in the theatre via steel cables so that they could fly vertically in and out. The shelves at the bottom were rigged to roll horizontally in and out of the wings (backstage). The computerised fly system allowed us to co-ordinate the scene changes with the music and lights, creating many different configurations such as walls, doorways, garage doors, etc.

The shelves were backed with translucent white cloth which allowed the colours to change with clever lighting from behind. The shelves also featured a giant heart of 117 red squares, which was rigged with incandescent light bulbs and covered with red acrylic. (To simulate IKEA LEKMAN boxes, but cheaper!) These gave us the bling we needed for the finale number – pulsing, concentric hearts! 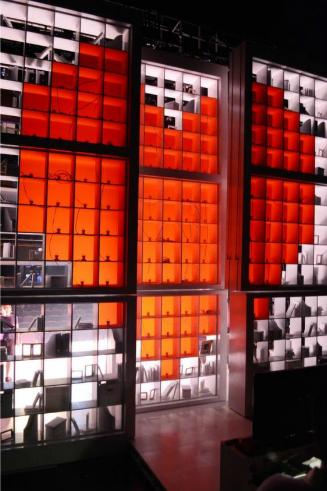 The other parts of the set were designed to match the EXPEDIT look, along with some mod-furniture that I custom designed. The set dressing (white boxes, frames and other junk filling up the shelves) was mostly from IKEA! See how many items you can spot. (It’s practically an IKEA showcase, and they still refused to sponsor us!)

You can see more photos of this show on my website.

(And yes, this entire set was partially inspired by my own kitchen EXPEDIT hack, which I posted earlier this year!