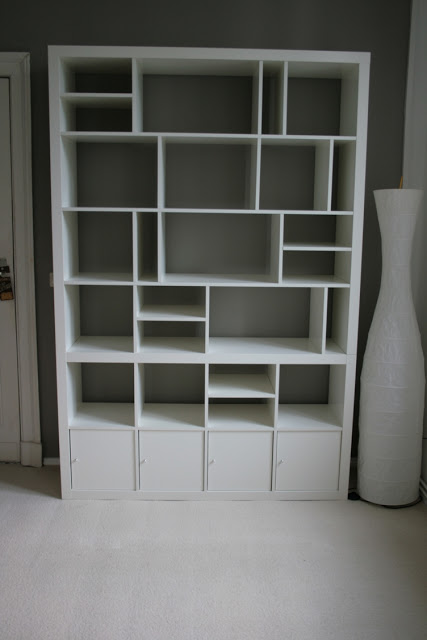 Description: I always liked the “thick-outer-thin-inner-shelves”-structure of the Expedit but wasn’t too fond of the regularity of it … and neither the fact that everybody immediately recognized the Expedit as such.

I found inspring hacks here like the “Expedit reshuffled” and the “Expedit to the ceiling” and I thought, I’d like some combination plus some modifications the best. So I bought 3 Expedit shelves, a 2×4, a 4×4 and a small 2×2.

I used the smallest just to get 4 extra case boards: 2 as delivered and 2 extra by sawing up the long middle case board into another 2, using a Japanese saw and two clamps. I used one of the delivered case boards to guide the saw a bit and get smooth edges and the same length of my cut pieces. 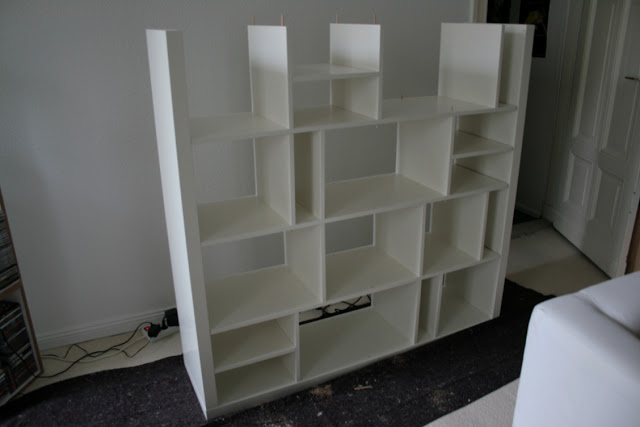 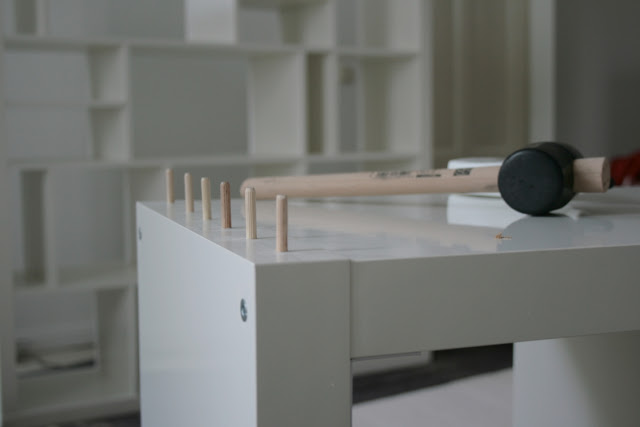 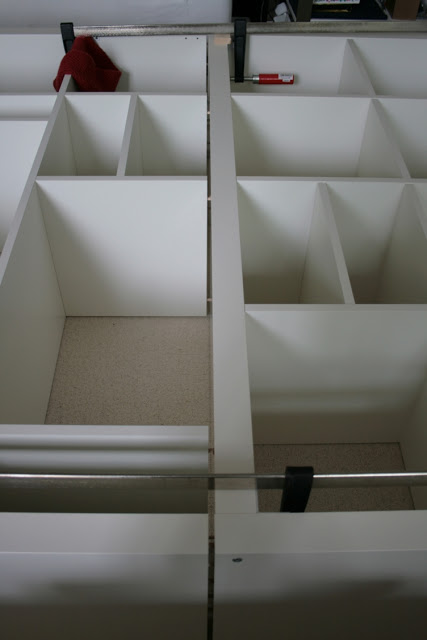 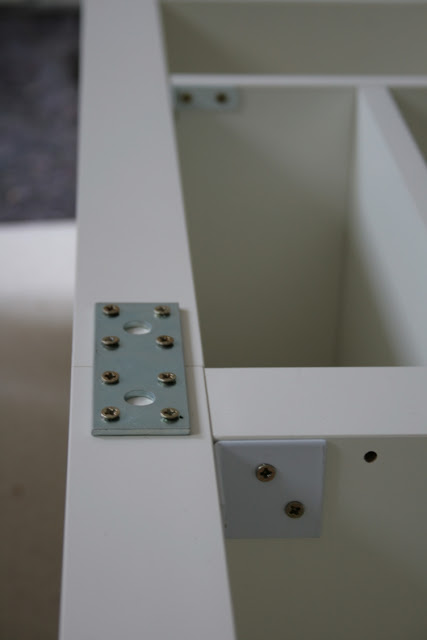 Then I assembled the 2×4 Expedit quite as intended, just adding a horizontal extra case board by drilling some extra holes and using some shortened dowels.

The 4×4 was assembled, also adding some extra horizontal case boards and shifting some of the vertical ones into different positions to loosen up the oh too cubical structure. The bottom panel was left away in order to have just one thick middle case board.

I attached small white brackets where I thought that the “outwards directed” forces on the shelves could be higher than intended and tolerated by the original Expedit, but I don’t think this is truly necessary.

For the drilling I used a wood drill equipped with a little stopper to avoid accidental holes running through rather than just into the board.
The thin inner shelves are pretty massive but do take care when drilling into the thick but mainly hollow outer pieces. Those only contain massive parts where the screws and dowels belong in the original design.

Then I used 12 of the extra dowels from the 2×2 to fix the “bottomless” 4×4 on top of the 2×4. Since the massive parts of outer boards are only about 1cm thick (and then hollow again) the dowels needed to be glued into one piece and allowed to harden there. (Else they would have be pushed into the hollow gap instead of sliding into their “counter-holes”.)

Since I’m a petite woman working alone, putting the pieces together worked best with both shelves lying on the ground and inching them closer and closer with 2 clamps. When the shelves were positioned properly, I fixed them with 2 perforated metal plates…just in case the dowels break or whatever.

Afterwards I “simply” lifted the whole thing from the ground (2,20m high and about 100kg … get help from a friend as I should have done! 😉 ) and pushed it into its space, assembling and adding four Expedit-doors into the whole thing.

One last note, the Expedit pieces are laminated and thus sensitive to sharp edges or anything else which could scratch them. I’m lucky since I built on a soft carpet and hence could push and shove the whole thing into whatever position. Else I highly recommend a large blanket or similar!