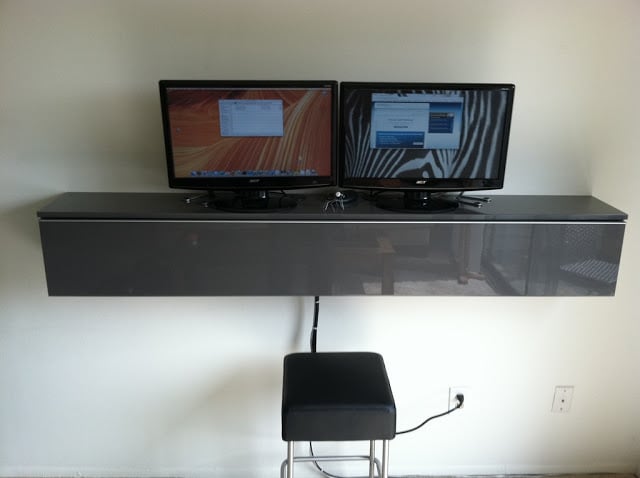 Description: I moved recently and wanted to make a nice “workstation” for my Mac Mini

. I use the computer like a TV; Netflix and other Internet media. I don’t do much (any) work on it.

I saw the Ikea Besta Burs wall-mounted drawer, and it got me thinking. The piece has a single fold down drawer, it’s meant to hold DVDs. But in non-typical Ikea fashion, this thing is massively overbuilt. The hinges are really heavy duty. And the particle board shelf is relatively shallow and therefore strong. 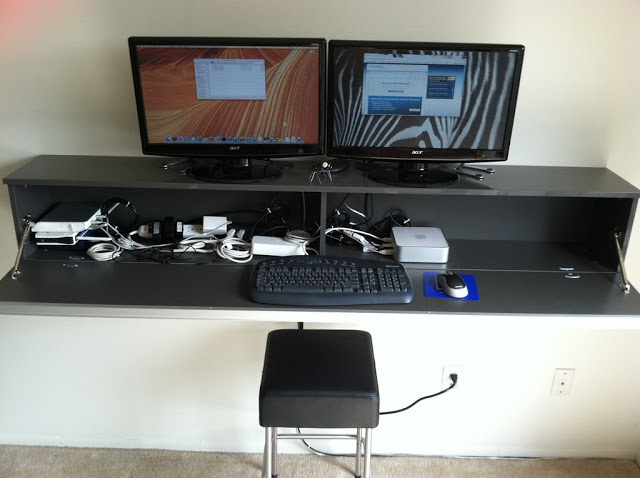 I needed to drill holes for passing cables through. I bought a drill and a special bit to drill large holes. I gave the holes a classy look by purchasing some plastic caps that let the wires go through. Home Depot had all these things.

I did the wire hole drilling on my balcony before assembling the unit, supporting the pieces between two chairs. In order to not bung up the nice glossy surface I left the plastic protective cover on while drilling, also start the drill by plunging into the glossy surface. Inevitably you well end up pushing through the last bit of wood, it’s much better that this happens on the surface you don’t care so much about. Also make sure you measure where you want the holes to be!! 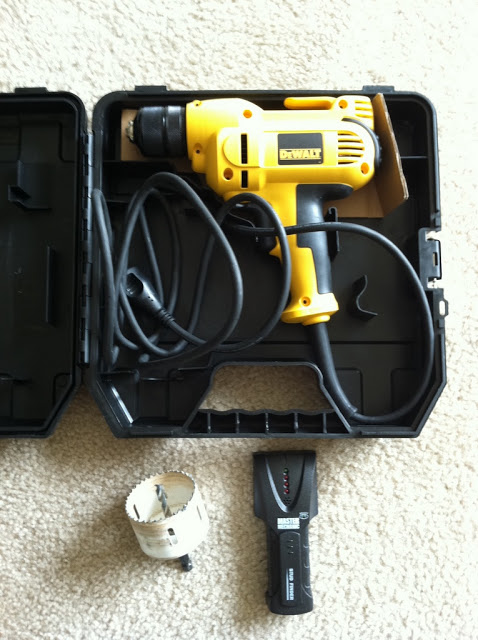 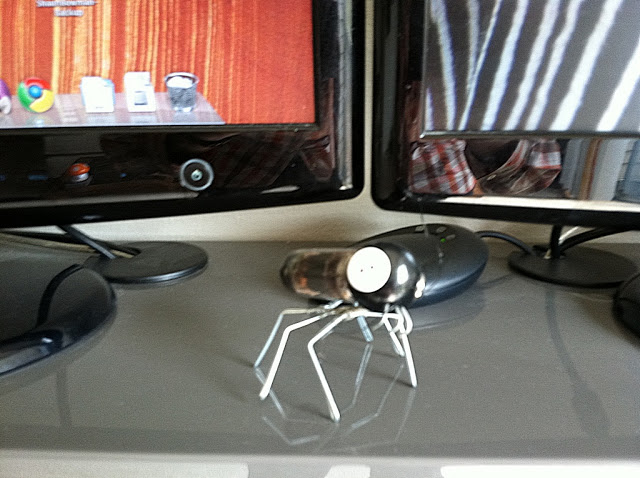 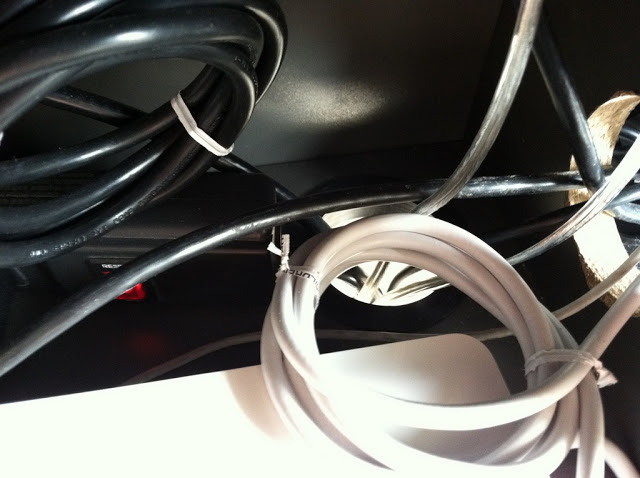 Finding the studs in the wall in order to anchor this beast was hard. I used a “stud finder” but as I repeated my measurements with different speeds and directions, I found my stud location varied quite a bit … Also, IKEA doesn’t space the pre-drilled holes at the standard US stud spacing (16 inches). I was able to stretch fit two of the holes, and use two studs.

The third hole landed solidly in between two studs, so I used a drywall toggle bolt. This bolt requires you to drill a biiiig hole, in order to pass through the spring-loaded metal wings. These wings snap out when they get to the other side of the wall. When you tighten the bolt, the wings press against the back side of the wall allowing you to tighten down pretty hard. Make sure when you push the wings through, you don’t accidentally let the whole screw fall behind the wall! I made a “custom” washer to keep this from happening using a bit of cereal-box derived cardboard with a slit in it.

I set the height such that the bottom of the unit was counter height. Originally I had planned on using a bar stool, but this would have meant the monitors were so high it would have been uncomfortable to watch videos from my couch.

You definitely need a helper to get this baby onto the wall, it’s much too big and heavy to do by yourself when you need one hand for the screw driver.

It looks soooo sweet! The glossy finish gives it a high tech look, and nearly all wires are hidden from view. There was enough space for me to include my external hard drive, router, two powerbars, Mac Mini, keyboard and mouse etc all inside the drawer. However I rarely use the keyboard and mouse, instead I use Tight VNC to control the Mac Mini wirelessly from my laptop. In order to control the stereo from the couch, I bought a Sound Blaster XLive USB sound card and a 25 ft usb cable. It was a gamble the Mini’s usb ports could power this devices, especially with the long cable, but it’s working great. All in all I’m very happy with the result, and at about $100, it’s a great value.