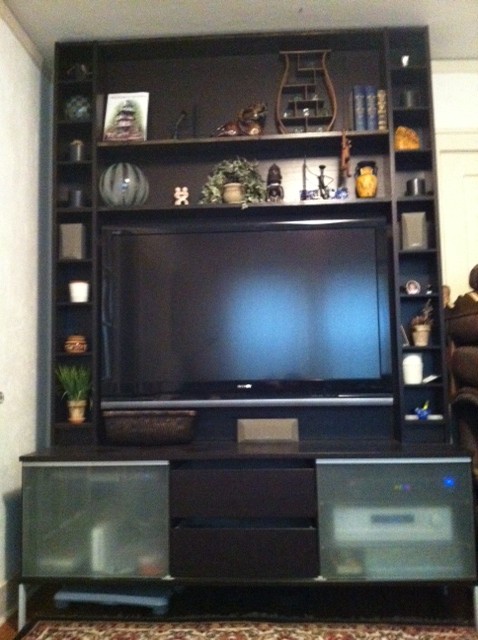 #1 – We built the Tobo Storage unit and attached the metal brackets from the TV panel. Usual stuff, followed the directions. So boring but that’s it…. Now the fun part.

#3 – We measured the remaining space between the top of the Tobo TV Panel’s bracket and the ceiling. We ripped panel #2 lengthwise to fit that measurement. Next we had to use a hack saw to cut the supports to the same length.

#4 – The 2nd hacked metal bracket was attached to the 2 x 4 on top of the full length metal bracket. So at this point you have the storage unit with the 2 sets of metal brackets, one stacked on top of the other and they are held together by a long, floor to ceiling, 2 x 4 that is painted black.

#6 – The Benno CD towers were cut to be the length from the top of the storage unit to the top of the structure and/or the ceiling. Same thing. Because we sawed off the holes that were to be used to build the thing we used the cut off piece as a jig to make new holes. It worked perfectly.

#7 – We built the Benno towers according to the instructions. The towers were attached through the back of the CD tower being careful to put the screws behind where there would be a shelf. This way the screws were hidden behind the shelf.

#8 – We used pine but nicer wood can be used. We got planks and ripped them to (I think) 6″ wide, whatever the measured depth of the CD tower was. They were then cut to the proper length, sanded and stained with a black stain.

#9 – The shelves were attached through the existing holes in the CD tower AND after very careful measurements….they were attached with one screw in the middle through the back of the unit. This is so they wouldn’t dip or sway over time.

#10 – I colored one end of all the shelf pegs with black sharpie. The first shelf that I put up I hadn’t done that and all I could see was this shining silver thing. The black sharpie worked really well.

#11 – I colored all of the predrilled holes with the same Sharpie. Again….the press board almost glowed against all the dark color.

#12 – The pegs were put in the proper holes with the shinny side in. We made sure that the first shelves in were the ones used to cover the screws that held the tower to the back. Just in case….I colored those with Sharpie too.

#14 – Add decor. There is a hole behind the dragon on the top shelf. It’s the hole that would have been used to put the wires through on a normal TV panel. Ours is the auxiliary top panel and it would look stupid to have a TV on top of a TV so we put a dragon up there.