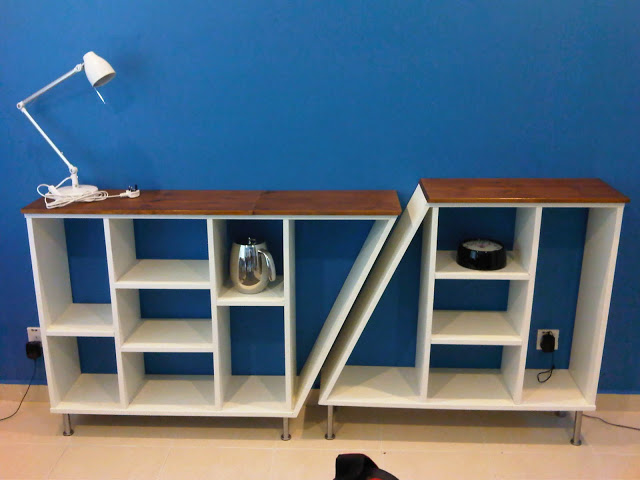 Description: After trawling your website for more than a year, I finally have an IKEA hack of my own to post. It has taken a while to complete due to personal reasons, but it has been a very fulfilling project.

I started off with two wide Billy bookcases, one tall and one short, both in black. These were purchased about 4-5 years ago and were in great condition. However I didn’t like the fact that the book shelves started to sag after a while, so I thought I could brace the shelves with some sort of reinforcement – this is how it all started. Browsing through the internet for ideas, I came across Ikeahackers.net which was full of amazing ideas.

So I decided instead of just reinforcing the shelves, I would hack the whole damn thing! At the same time I had started repainting my apartment white and blue, so the black Billies had no place in that theme. So I came up with a sketch to turn the Billy on its side and create a bar type table that I could use as a room divider. The idea to make a diagonal cut was actually drawn from an old post on IKEA hacker I came across.

Then begun the process of building it. I started off by removing the back and building the shelves to reinforce the frame of the tall Billy. 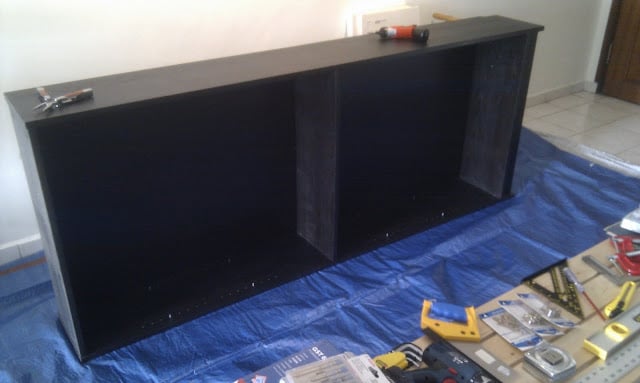 Then using a jig saw and careful angle measurements, I made a diagonal cut across. I then chopped the short Billy up and used those as the diagonal side panels. 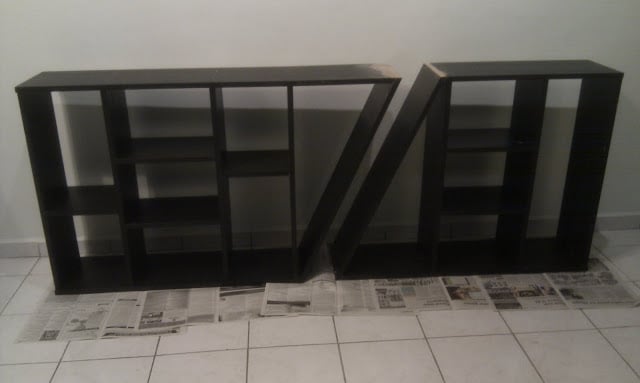 Then I sanded the surfaces down with an orbital sander, applied sanding sealer and painted the entire bookcase matte white. At this point I purchased a beautiful (and very expensive) 246cm length piece of oak Numerar kitchen worktop to be cut for the top. However, due to mistake while cutting it, I had to scrap than plan! (As the saying goes, measure twice, cut once!).

Also, I had moved house at this point, and had no space for a bar so I downgraded this project to buffet. I ended up using the Numerar worktop for another hack. Instead, I got some very cheap Broder shelves, cut them up, sanded, lacquered and buffed. They were used as the top. I used two different heights of Capita legs to prop the entire hack up.

Voila, job done! I hope you guys enjoy it. It’s taken me a while and it has been through several idea iterations along the way, but in the end, I am very happy with the way it turned out. Thank you Pearl for all your sweat, help and patience with this project!