Honey I shrunk the Expedit! 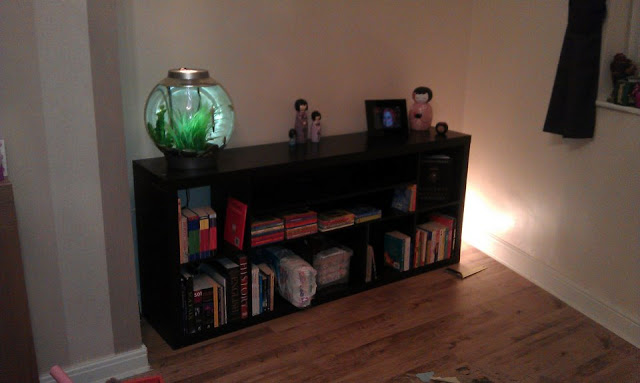 Materials: Expedit TV Storage Unit (Discontinued), hand saw, electric drill and duct tape (proving its use in just about anything!).

Description: I recently moved from a 1-bedroom flat into a 3-bedroom house and ended up wall mounting my TV. As a result, I was lumbered with a 6’x6′ dust and junk collector (see before photo). After much deliberation (and convincing my better half that I wouldn’t a) break anything; b) injure myself and c) that it would look great) I set to work on turning the unit into a rather more pleasant sideboard.

The top of the unit will replace the long bit of board that forms the shelf that the TV usually sits on. Using the underside of the TV shelf as a guide, draw a line from front to back in the top outside corners of the second squares up onto the side panels of the unit. Do this on both sides. This is where the side pieces will be cut. By doing this first you can save a lot of hassle with trying to measure up after you’ve taken the unit apart.

Tip the unit onto its front and remove the top, bottom and sides of the unit and put aside. You will need to discard all of the bits above the TV shelf including the TV shelf itself. None of these bits are needed (unless you can think of a “hack” for them).

Take the two side pieces and carefully use a handsaw to cut along the lines you drew before. This will create the new shorter side pieces. This bit took a fair bit of experimentation though and led to the discovery that a jigsaw just won’t cut it (no pun intended) as the blade isn’t quite long enough. Also, the inside of these thick outer pieces is mainly a honeycomb like cardboard structure but with chipboard at various points for strength. Where I marked for cutting just happened to be where the chipboard supports were located and this made cutting the boards a little more difficult. A bonus of this though was that it meant there was something for the top of the unit to screw into.

N.B. I used a handsaw to make these cuts and found I had to file away afterwards to get a snug fit. I would suggest a perfect result could only be obtained with a decent bench mounted circular or band saw. If you only have a handsaw then just be careful to make sure the cut is as square as possible and this will save a lot of hassle when trying to put the whole thing back together again.

The next step was to put the shrunken unit back together. As I mentioned before there are periodic chipboard supports within the side pieces. I found that one of them was quite thin and wouldn’t take the screws to hold the top of the unit on. I took the discarded side bits and located the bits of chipboard that the top used to screw into. I then set about removing these from the side panels, which was quite messy and resulted in lots of hacking away with a bread knife to end up with two nice bits of chipboard.

Once these had set I put all the pieces of the unit back together including the top board, which screwed into the already existing holes (bonus!)