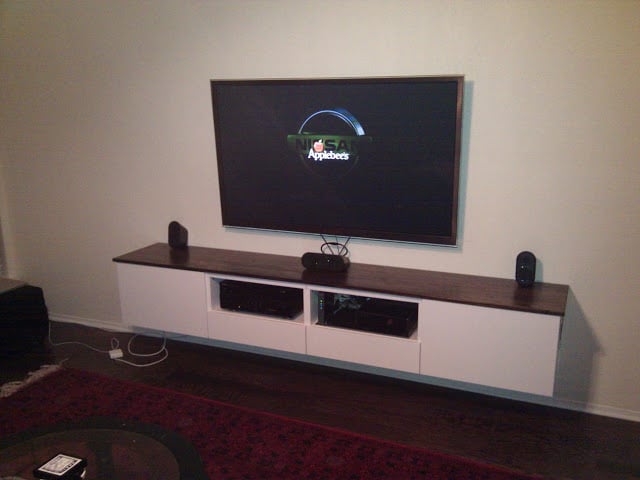 Description: To be honest, I set out to copy the “another winning stolmen media unit” that is posted on here, but once my wife and I set foot in Ikea, we decided that we did not like the Stolmen line for our purposes and instead found the Besta range. 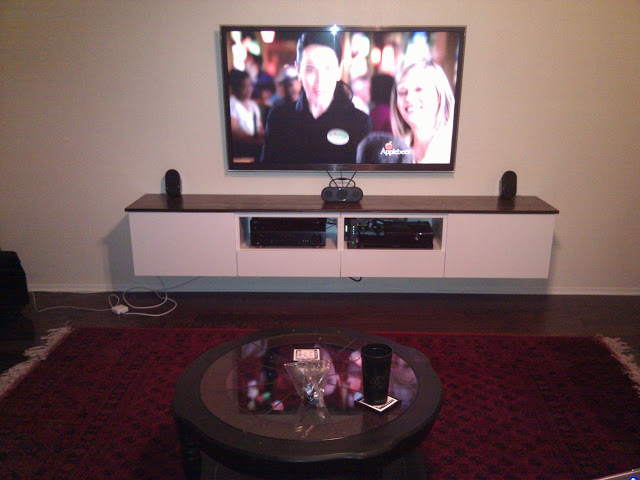 Instructions (this is specific to the configuration seen here):
1. Assemble the Besta units, but leave the shelves, drawer and doors off.
2. Clamp and then screw the 2 Besta units together.
3. Locate the height of the middle open shelf and drill a pilot hole between the two cabinets near the rear approximately 2″ above the open shelf for a cable pass.
4. I used a 2″ hole saw to enlarge the hole and 2 of the readily available desk top cable covers that are available at Home Depot and Lowes.
5. Determine where your power supply will enter your cabinets and make a hole large enough for that cable to pass through as well.
6. To mount the cabinets to the wall, I used the Besta suspension rail (101.245.85 above) to keep things simple. This rail simple screws to the back of the Besta cabinets and then mates to another section of the rail that you have mounted to studs in the wall (similar to a French cleat).
7. After mounting the cabinet unit to the wall, I installed the 2 drawer systems, 2 doors and shelving.
8. I took measurements of the cabinet system mounted to the wall and decided what material to make the top out of. I had initially decided on using a black walnut to match my floors, but pricing for that lumber was well beyond what I had already spent on this project, so I decided on an easy to work with and inexpensive material, Poplar. I used 6″ wide boards to match my existing flooring width, made sure the edges of the boards to square and flat and joined them with a biscuit jointer. After the glue had dried, I sanded everything smooth and then used a dark walnut stain, followed by a urethane sealer. To connect the top to the cabinetry, I simply positioned the top where I wanted it, drilled a hole at each corner and used a stainless steel carriage bolt with a washer and nut.

Once everything was said and done and mounted, my wife and I love this piece. I have our television on a Peerless wall mount above it, all of the cabling is run through the wall in conduit, my receiver just barely fits in the left open cubby, my Xbox 360, router, modem and Blu-ray player fit in the other cubby and we use the cabinets for DVD/Blu-ray storage.

Hopefully, I can provide inspiration for someone else to think outside of the box and make a piece of furniture that works best(a) for them!