This Hack Could Save Your or Your Kid’s Life 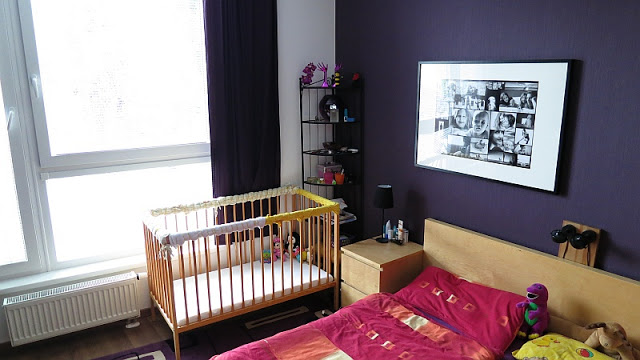 Description: So I finally got around to hanging my large 100cmx70xm FJALLSTA frames. I only had print for one, but I hung them both anyways. As both frames were to be in the master bedroom right above our heads, where also a 13-month old resides at the present time , I didn’t want to leave anything to chance. I bought high quality screw anchors and solid screw hooks to go with them. I drilled the holes, hang the frames.

Two hours later at 6PM, crash boom bang, one frame came crashing down. The metal clip at the back of the frame holding the wire just snapped braking in two. Obviously I was concerned given the position of the frames right above our heads. I was planning to take both frames back the next day. The mistake was not taking down the other frame still hanging. At about 8PM, shortly after my baby boy was put to sleep in that very bed, another crash boom bang. Horrified we ran into the bedroom, finding the other frame just inches from our baby’s head (the first frame fell in the gap between the wall and the bed, this other one fell right on the pillow. 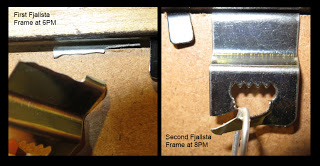 I don’t have to tell you how furious I was (and yes I know it was stupid of me not to hang down the other frame after the first one fell). The next day I went to Ikea’s Bratislava store to return the frames. I asked for the manager, wanting to caution them about an obvious batch defect that I think could warrant a recall (if 2 out of 2 frames fail like this, I say something’s definitely wrong). The first response I got at the returns counter was “who knows what you’ve been doing with it”. Obviously that had sent me into frenzy, considering that piece of crap had just almost crushed my boy’s skull (which didn’t seem to be of special interest to the person), so there wasn’t much rational talk after that. At the end I was told “they would look into it”, and I could tell they “really” meant it. By the way at no point was the manager called. That’s Ikea customer service eastern European style.

Anyway, I needed frames, especially with the large ugly hooks now sticking out of my bedroom’s wall. Ordinarily I would just walk out of the store and never came back, but this is Ikea. And how do you go around ignoring Ikea? Especially in eastern Europe where choices are few and far between. I think it’s generally well known that Ikea’s workmanship, material quality and quality control are truly abysmal, often times just pure crap, but their design is great. Call me stupid, but I went in got another frame. This time a much lighter Ribba frame. The original frame was Fjallsta, a frame made out of actual wood (I’m not kidding, actual wood at Ikea, how about that?), hence pretty heavy. This Ribba frame is made out of genuine trash material that I would not even call fiberboard, more like recycled paper pulp. But hey, it’s lighter.

Obviously I did not want to leave anything to chance, so I devised the following safety measure in a form of a double wire (or string, rather), so that when the official Ikea hook system fails, the frame won’t fall down and kill someone. 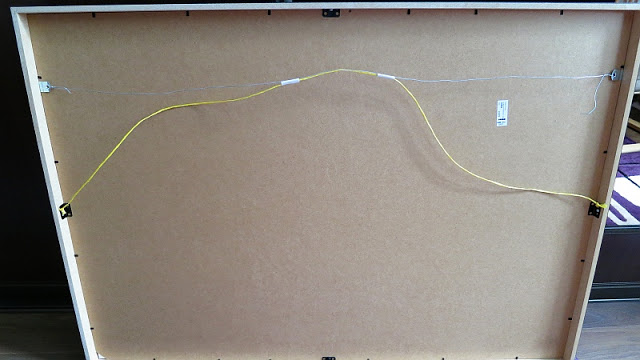 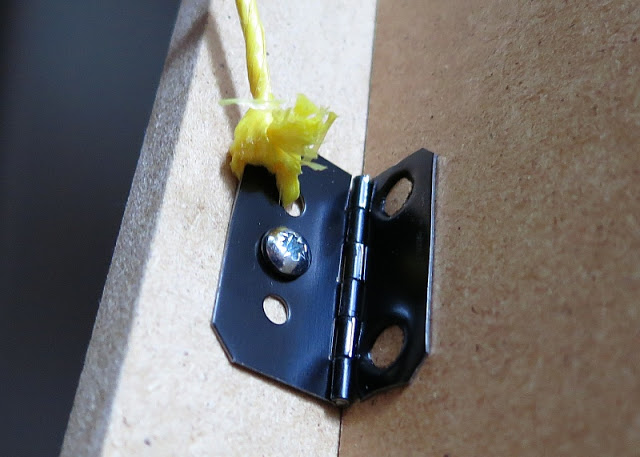 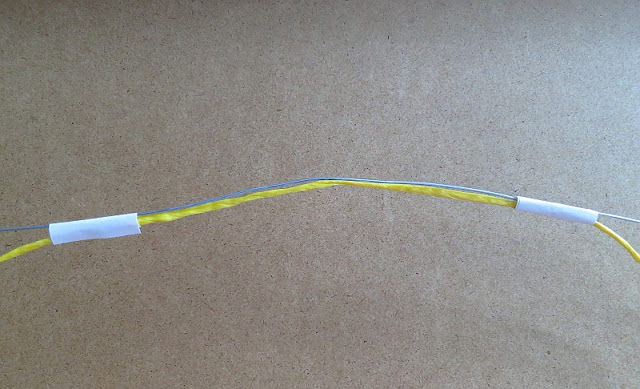 What made this secondary attachment easier to do were the metal clips you see in the middle of each side of the frame. Their purpose is to hold the frame with the back board. Why? Because the frame is pure crap, the material is so bad and such poor quality, that it cannot support its own weight. Hence the extra attachment had to be implemented by Ikea or the frame would just collapse into itself like a black hole. By the way, I have another Ribba frame at home, from about 7 years ago. It does not have these supporting clips. Why? Because back then the frame was made from actual fiberboard capable of supporting its weight, unlike the garbage they make it from today. Why does Ikea use garbage as a production material? Because it is cheaper, and cheaper material means lower costs and higher profits, and with the massive volume, they can easily afford a fatality here and there.

One final word: I have 7 other large Fjallsta frames at home bought last year. So far they all hang well. When I was putting together the two new Fjallsta frames, I actually explicitly noticed that the clips that hold the wire were different. They were thinner, flimsier than the old ones, and they were quite hard to slide on the back board. So essentially it comes down to the corporate cretins trying save a 0.01 cents on these clips, at the risk of injuring or even killing you or your family member. It’s a sad world we live in.