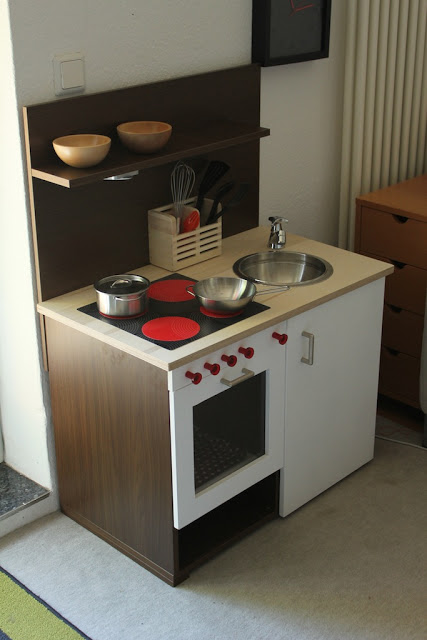 Description: I planned to make a play-kitchen for my daughter and searched for some inspiration on IKEAHackers. I found several play-kitchen based on the RAST bedside table (like this and this) and thought that this would be a great idea. So I drove to my local Ikea store for “playkitchen-shopping” and bought the play pots (DUKTIG), plastic kitchen spoons (AKUT) and the wooden stand for those spoons (MAGASIN). Then I went to the self-service area to pick up the RAST table. But as I saw it, it appeared sooo tiny to me!! I didn’t want to make such a tiny play kitchen, since kids will play with it until an age of 5-6 years.

I was a little out of concept, since my plans had vanished. Then I discovered the VALLA kitchen doors which where sold for 2 Euro piece. I chose the format 70cm x 40cm, perfect for the play-kitchen. I bought 4 doors and a larger panel (70cm x 60cm) for the back. And I also found a 60cm x 13cm drawer front which I would use as a small shelf on the back panel. 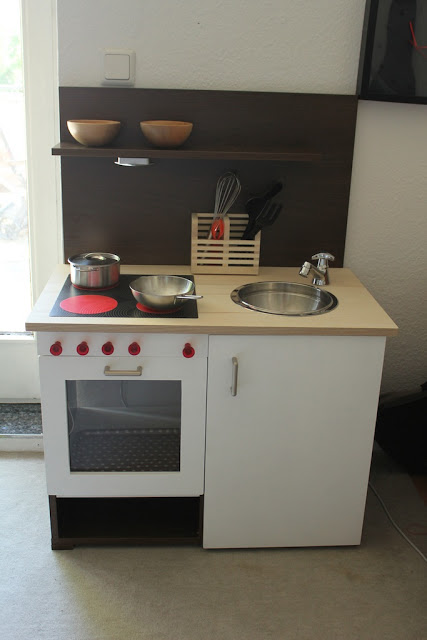 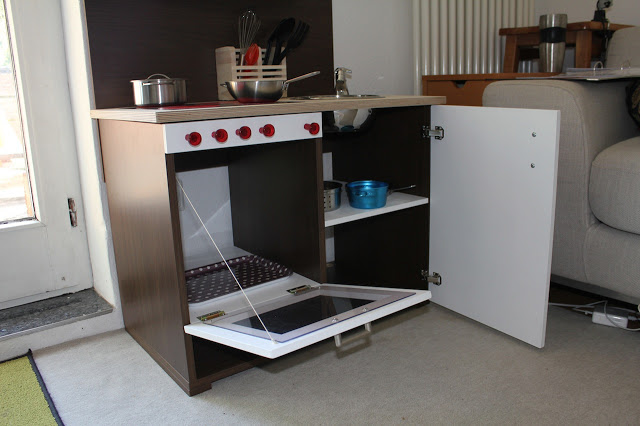 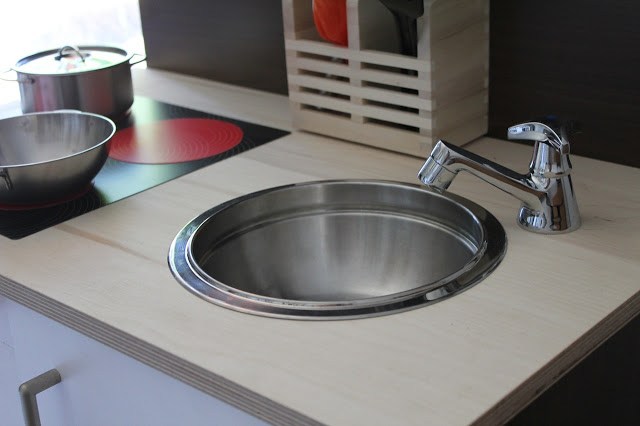 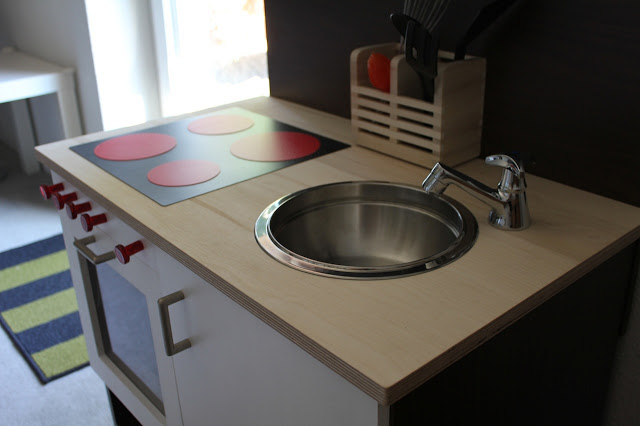 I went to the hardware store to cut down the pieces to the right format: the sidewalls where chosen to be about 50cm high (3x). The bottom panel just stayed at the normal size and I decided to buy a countertop in wood with a larger size (74cm x 42cm) to overlap a little on the kitchen cabinet (about 8 Euros).
I also bought some MDF boards to make the stove door and cabinet door, as well as the shelves inside the stove and cabinet. The window was cut out in the stove door and I placed a plexiglas inside, which I fixed with some little screws (you could probably just glue it to the door as well).

I painted the doors and shelves in white (acrylic paint, because children are going to play with it!) and added some handles I had laying around from my old kitchen. The sink is an old bowl from our kitchen. I ordered a tab on Ebay for 5 Euros which I put into the counter top. The placemats where used to make the cooking area. The switches for cooking area are Sätta handles (1 Euro for 6 pieces). I also added an LED lamp below the shelf on the back.

Below the kitchen cabinets I put to pieces of wood from the side panels, so that the cabinet door could open more smoothly without touching the carpet.

When my children will be a bit older, I plan to put some wheels under the play-kitchen, so I could put it either in their room or move it around in the house, but for now, it stands in our living room, and with the wheels it would just be to high for my little girl.

In the end my planned IKEA hack came out to be not so much IKEA anymore, since I build that kitchen from scratch, and not by using a preexisting piece of IKEA furniture. But the doors from IKEA are just a much better quality than anything I could have bought in the hardware store for the same price.

The total cost of that kitchen must be around 40-50 Euros without the play pots and spoons, and its way below the price of the IKEA play-kitchen you could buy.