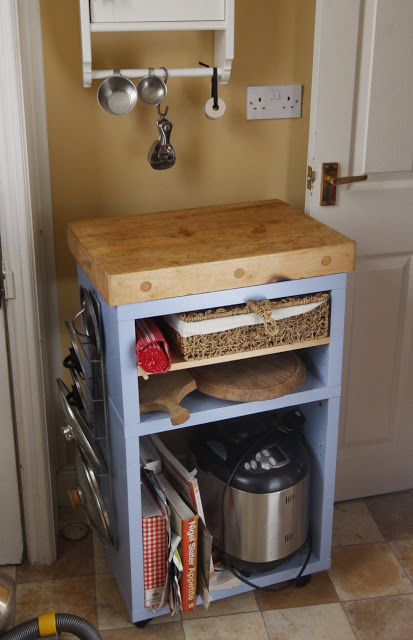 Materials: 2 x bedside unit (we think it was LACK but the nearest they now sell is called KONSMO), 1 x Large chopping board, also originally from IKEA (no longer stocked), a handful of screws, a saw, and 1 pot of paint.

Description: When we moved into our current house, the kitchen was small, awkwardly laid out, and severely lacking in surface space and storage. One particular bit of the kitchen was causing us issue, the small gap between the cellar door and the door to the living room. Putting anything there would result in us not being able to use the cellar. Not putting something there left us w ith not enough surface space.

What we needed was a kitchen unit that could be moved out of the way if greater access was needed to the basement. Sadly IKEA did not stock a suitably sized island unit. However, what we did have was a now redundant cut price bedside table that we had been using as a tv-stand back in our old flat. On testing, we discovered to our delight that the chopping board, which on its own took up the entire surface area of the kitchen, was in fact the perfect size to perch on top. However, one unit on its own was too low. So we skipped off to IKEA and purchased a second unit of the same size. 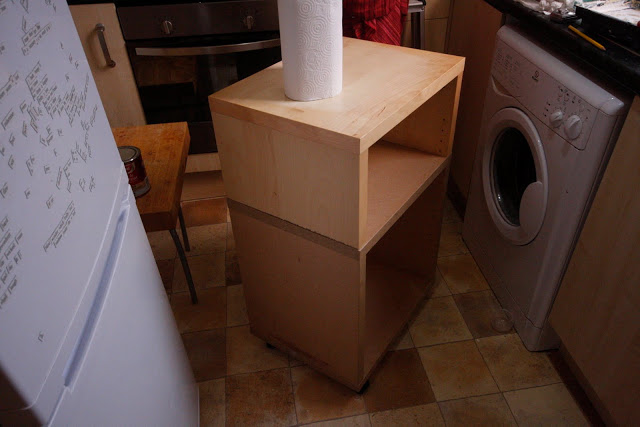 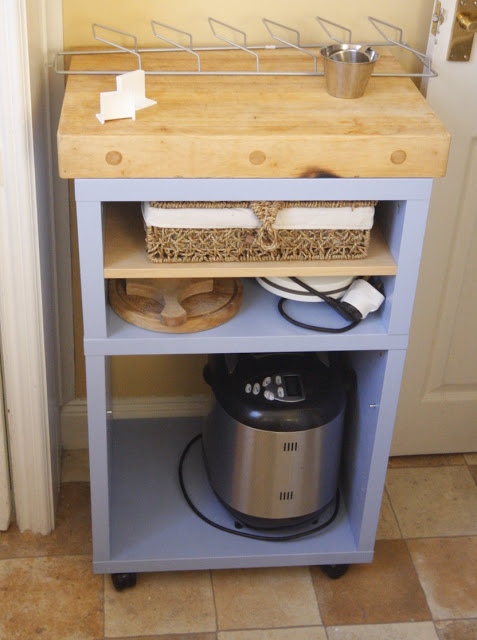 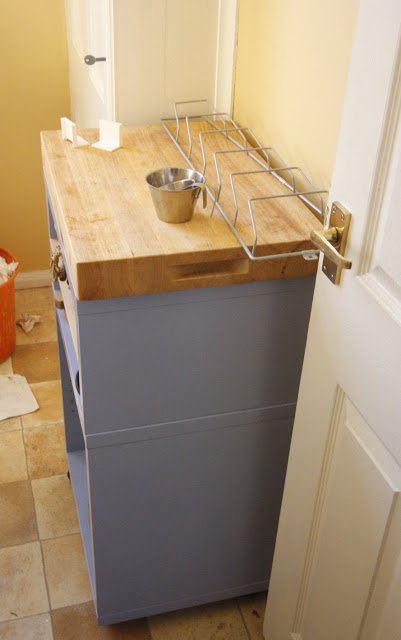 Some sawing and assembling later we discovered not only the glorious honeycomb filling within the side pieces, but had also managed to stick them together. We measured the height we needed, minus the thickness of the chopping board, and cut one unit to match, before attaching it to the bottom uncut unit. As you can see, the two units looked nothing alike, so we chose to paint them using some duck egg blue melamine paint. As our living room was full of everything that was supposed to be in the kitchen, all the painting was done in what little space there was in the kitchen.

Two coats later, it actually looked like a coherent unit. The wheels were reattached, and the shelves put back in. We decided to keep one of the wood effect shelves unpainted to echo the colour of the top half (and because the melamine paint was a pain to use). The final step was to attach the pot lid rack and place the chopping board on top. The chopping board needed no extra support or fittings. Being solid wood the weight alone keeps it from moving as the satin paint gives it enough grip to not shift.

We then stocked it with the smaller chopping boards, our cookery books (which had no other home) and our moving in gift of a bread machine. The wicker basket came from a work’s Christmas hamper (I got the basket and 2 of the contents) and just happened to fit perfectly into the space. It currently holds all our onions and garlic. While the unit can move freely, it mostly lives in the corner and also hosts the coffee station. From a useless space, it has become a much loved part of the kitchen. While not a full hack, above it in the photo you can see the IKEA bathroom cabinet that turned out to be the only cupboard that would fit into the space above it, the towel rail is perfect for hanging vintage measuring cups off making it a very useful preparation space.