Bathroom Sink Base to Trash/Recycling Center 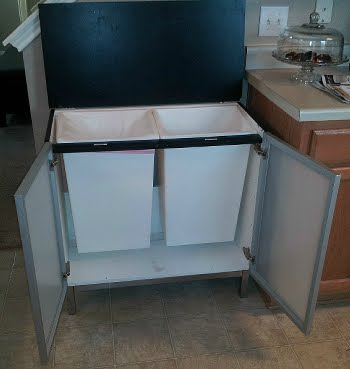 Description: I was in Ikea looking for those ‘in cabinet trash receptacles’. Unfortunately, they were smaller than I wanted. As I was walking out, I saw the Lillangen Sink Base Cabinet on clearance and thought it was about the right size. I grabbed 2 Filur trash bins – and they fit PERFECTLY. On the way out, stopped in the ‘As-Is’ department and grabbed a flat cabinet door panel (unknown series) and a couple of the hinges.

I moved the back supports on the cabinet to the top, giving me a support for the hinges and a hanging area for the trash bins. I had to cut the door panel down to size (length and width), fitting it with hinges and it became a top lid. I also had to flip the cabinet floor as it had a support in front that I moved to the back. BTW, I used the stock hidden hardware, drilling new holes inside so I wouldn’t have to drill screws through from the outside. 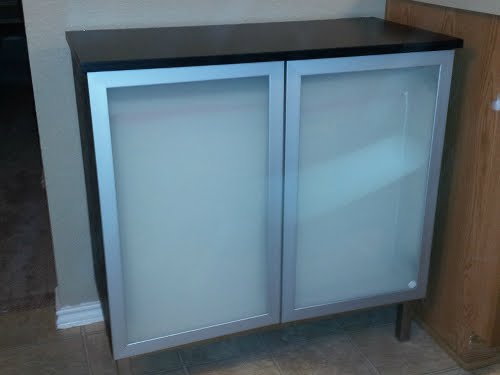 The Lillangen has white laminate sides – and the door panel I had was the black wood color. I used a very coarse (60 grit) belt sander, leaving deep groves into the laminate, slightly swirled. When I painted it black to match the lid, it looks EXACTLY like the wood grain (or at least it looks close enough to me). In fact, the lid itself is NOT painted – it’s the stock Ikea Black Wood color.

This cabinet works great for me. It’s at the end of my counter top, giving me extra space to store things on top if I need (I don’t). I can open the top lid to put in the trash and separate the recycling. I can also use the front doors if I want to remove the trash cans (although I find I almost always just lift the lid).

And here’s the best part: I mentioned the base cabinet was on clearance. I didn’t mention it was out of stock! They actually gave me the display one already assembled off the floor, including the legs, for even LESS than the clearance price. Seriously, the most expensive part of this was the Filur trash bins themselves!!