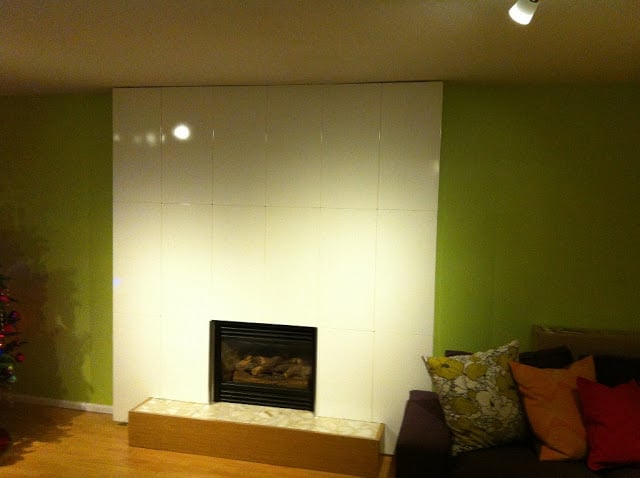 Description: We were tired of looking at the original brick fire place in our main living space. The open fire box was changed into a gas insert many years ago and the room has been painted over 4 times, but the brick work remained.

As the brick work has to be maintained without being permanently altered, tiling it over and painting it over weren’t viable options. Another idea was to add wood panels over but there is a safety concern.

An inspiration struck when we repainted another room and needed to take down the older style Ikea magnet boards in that room. The boards appeared to be the perfect candidate to be used as the cladding panels over the brick fire place. 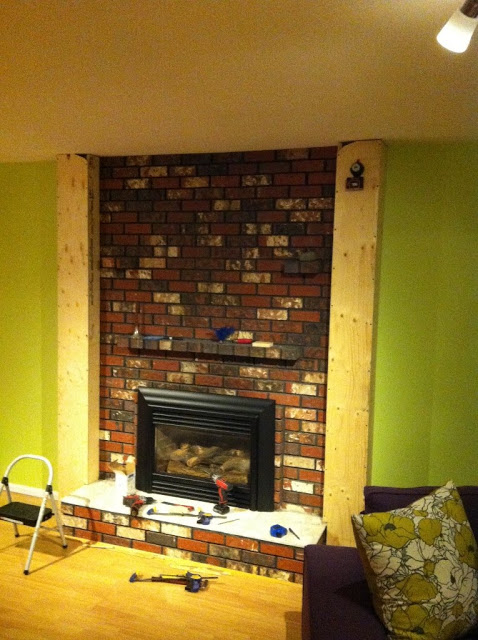 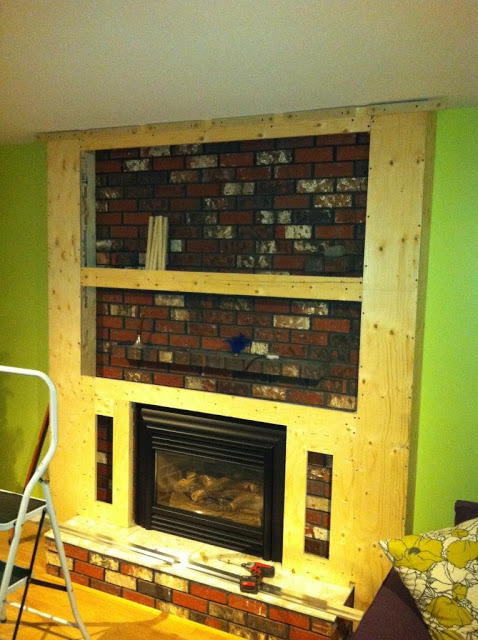 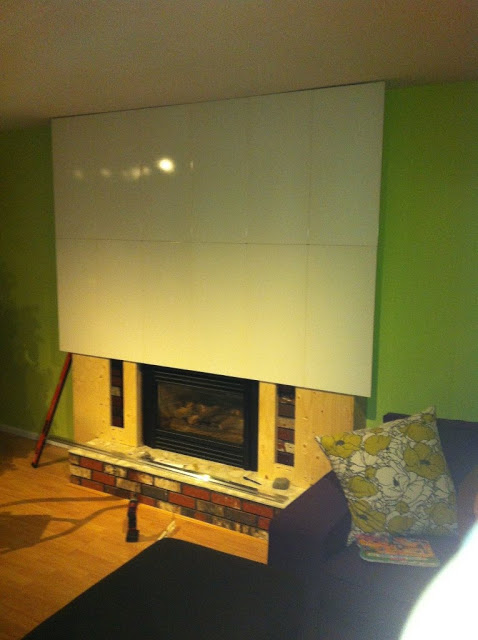 I then devised and designed the plywood under structure to support the Spontan boards and in order to secure them to the frame, I made cleats with embedded rare-earth magnets.

Please see the result via the steps and photos.

1) Made the 2 vertical supporting pilaster frames out of 3/4″ thick plywood. Each frame was tailored to the pilaster and friction fitted over it. 3 screws were screwed into the inside of the frame, with the shaft of the screws just penetrating in between the vertical brick mortar joints. The screws added security.

2) 4″h Horizontal cross bars (t-shape to add rigidity) were mounted to the vertical frames in 3 positions. At the very top, middle and lower portion to support the horizontal joints of the boards. The lower cross bar was placed well above the fire box.

4) The Spontan boards come with keyslot mounting holes in the back but were only meant to be hung from the top. It did not suit my requirements so I made plywood cleats 1.5″h (fitted between the folded in edges of the Spontan). The cleats were drilled for 1/2″ diameter rare-earth magnets, where were glued in with PL400 Construction adhesive. The glue has to cure for 24 hours before using.

5) Using a long level, I drew the first line at the top of the frame. Allowing for the thickness of the Spontan, to the ceiling in the center, I screwed the cleats in one row. Each cleat was spaced from the next one by 2″. Each board required 2 cleats – top and bottom. There was some fiddling around of the cleats to ensure that each board was tight to the adjacent one.

6) Once the top row of boards was established, I secured the second set of cleats. For the exact spacing between the boards vertically, I used a 12″ long steel ruler (which was just shy of the thickness of the Spontan. To get the correct thickness, 2 layers of masking tape were added to the ruler). Working sequentially, the second set of top cleats were mounted with screws). The best method was to mound each top cleat, put on the board to see the alignment. If slightly off, then re-mount the cleat until perfectly aligned. Once the top row of cleats was all positioned, then do the bottom cleats.

7) Two rows of boards were mounted. For our fire place, serendipitously, the Spontan boards worked out perfectly. 2 boards wide equalled to exactly to width of the fire box. The two lengths also exactly reached from the ceiling to the top of the fire box.

8) Besides the fire box, modification was required to fit the boards. I made the necessary cuts and notches using my 7-1/4″ circular saw fitted with a Metal
Cutoff blade. Be sure to wear all safety gear as it creates a lot of noise, sparks and odour.

9) The modified boards were mounted with the cleats and the same method.

10) for the hearth, I was going to use the same Spontan but just happened to have some surplus veneered shelves from another source so that was used to cover the hearth bricks.

11) Finally, I again used an aluminum cabinet hanging cleat from another source to frame the inside opening of the fire box.

The end result completely transformed the room and covered up the eyesore of a tired looking brickwork.

The added bonus is that the entire Spontan cladding now acts as a giant radiator panel to distribute the heat from the fire box, so the fire does not need to be turned up high.

This is not recommended over a wood burning fireplace.