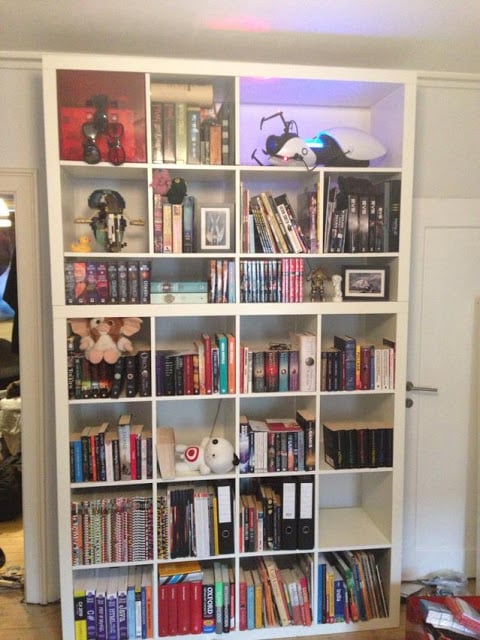 Description: I have had my Expedit 4×4 for years, but was desperately running out of room in it, so when someone left another white 4×4 in the trash room, I quickly ran out there with an Allen key and saved it!

First, I found that I could fit just over 2.5 extra rows between my existing 4×4 and the ceiling. Measured out, drew the cut lines on the side panels and went to attack it with a saw. Sanded down the worst of the rough edges and assembled top part as usual, except I actually used the bottom board for the top; I figured that since it would be near the ceiling anyway, it wouldn’t be visible, and I had a plan for the nicer top part. Also cut a single shelf to match the height to help support the shelves.

Then I called a friend (awesome to have friends nearby who are doing nothing on a Saturday night, just like me) to help me lift it up on top of the whole Expedit, and hold onto it while screwing in two mounts at the back to hold it together. This proved to be stable enough, so I left it at that. The joins could have been filled in and smoothed; but being who I am, I opted for just putting tons of stickers on one side and postcards on the other – this way it also doubles as “art-space” 🙂 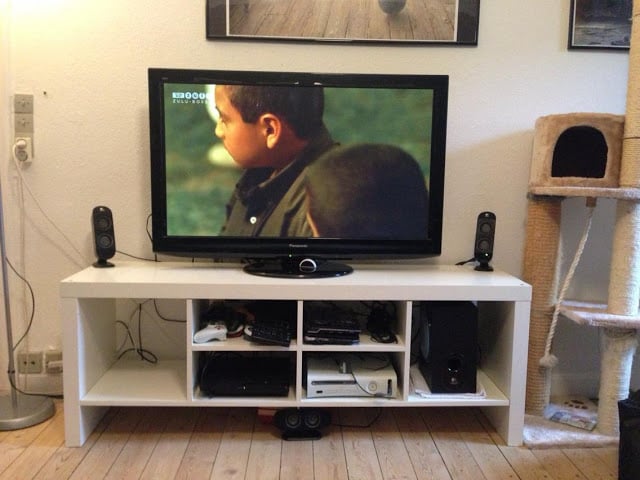 The top bar and the shorter ends of the cut sides were then also assembled to create a TV bench (this also needs support from the bottom, but need to cut another shelf for this; so until I get around to doing this, I just have a bunch of books supporting the bottom, hehe). I also added a few extra shelves with the unused shelves from the row cut in half – they’re literally just placed on to of a couple of screws, that’s it.