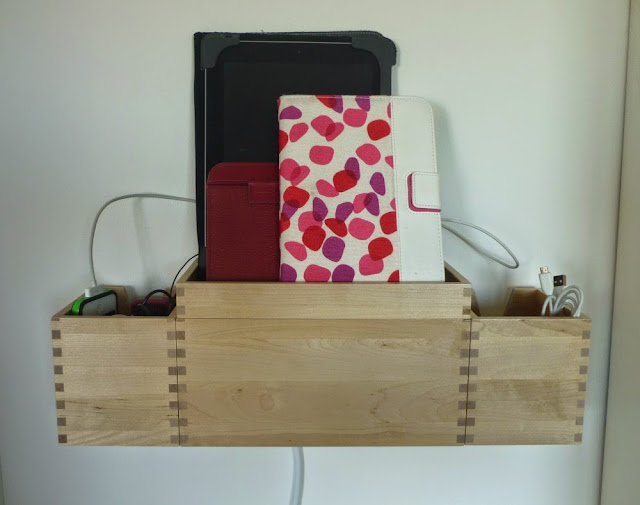 Description: We have in our household: 2 e-readers, 1 iPad, 1 smaller tablet computer, 1 iPhone, 2 other cell phones and a camera. All of which need to be charged ALL THE TIME. Result: We were constantly looking for charging cables, free wall sockets and the devices themselves.

So I built this charging station which can also be used to stores extra charging cables, earbuds and cell phones. I wanted a wall-mounted station so as not to clutter up the last few precious bits of free table and shelf surface.

I got the Forhoja boxes – it’s a set of one big and two smaller boxes; the big one comes with a tray-like lid. The entire thing is just wide and deep enough to comfortably hold the iPad, at least to Kindles and two cell phones at the same time. 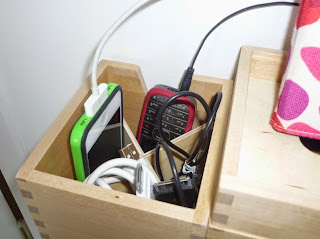 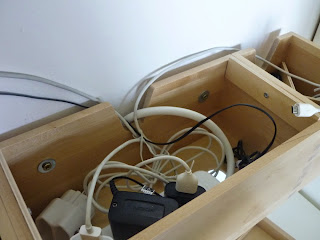 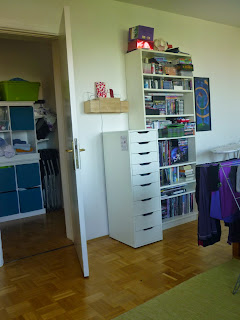 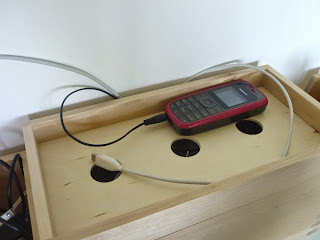 First I attached the little pieces of wood into the big box (instead of into the lid as per instructions) to prevent the lid from sliding about.

Using wood glue, I glued the smaller boxes on the sides of the big box. Originally I hadnât planned to use the small boxes at all, but they make an excellent place to keep earbuds (which disappear all the time as well). I glued 4 strips of wood (10 x 4 x 1cm) to the back to provide a little space between box and wall and put a few small nails in for extra sturdiness.

I drilled a few 22mm ventilation holes into the lid and the bottom of the big box to prevent the charging plugs and extensions lead from overheating. (Note: donât forget to put a piece of scrap wood under the box when drilling ventilation holes! You can also put sticky tape on the underside so the wood wonât splinter outwards when the drill breaks through.) I also drilled holes into the back for wall mounting with two screws and washers.

When I screwed the box to the wall I placed the power cable along the back of the box so it runs down the middle between the strips of wood. I had to use a manual screwdriver because the electric screwdriver wouldnât fit â” hard work! The cables inside the box are gathered together with a bit of plastic-coated wire so they wonât go all over the place when the lid is lifted off. The lid goes on to the box deep-side up, so the devices can be propped against the wall and wonât slip over the edge.

I’m pretty pleased with the whole thing; I only wish I had painted it a bright colour before screwing it to the wall – maybe I’ll do that at a later date when I can face having to screw it on again with the tiny manual screwdriver.