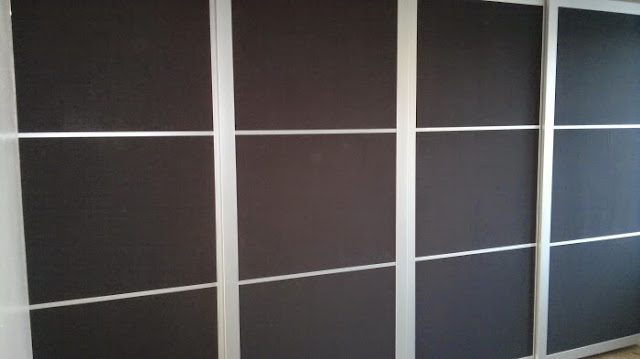 Description: When I bought my apartment at the end of 2011, I “inherited” from previous owners a 4 meter long Pax closet wall with semitransparent gliding doors. While renovating the apartment, the closet was moved to the dressing/guest room.

However, the closet has been my eyesore from the beginning. First, I didn’t like that my clothes were semi-visible through the doors, and secondly, the frames were birch colored which didn’t fit to rest of my interior. Also, the renovator had not done a very good work while reassembling the frames and the doors, so the whole thing was a little wobbly and the doors didn’t run very smoothly (see pic 1). But I didn’t have time to do anything to it. 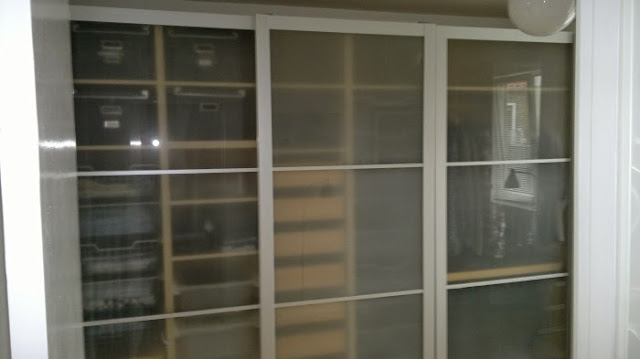 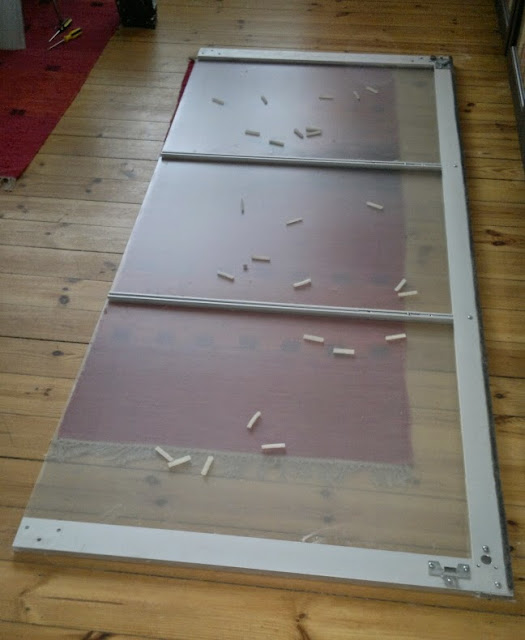 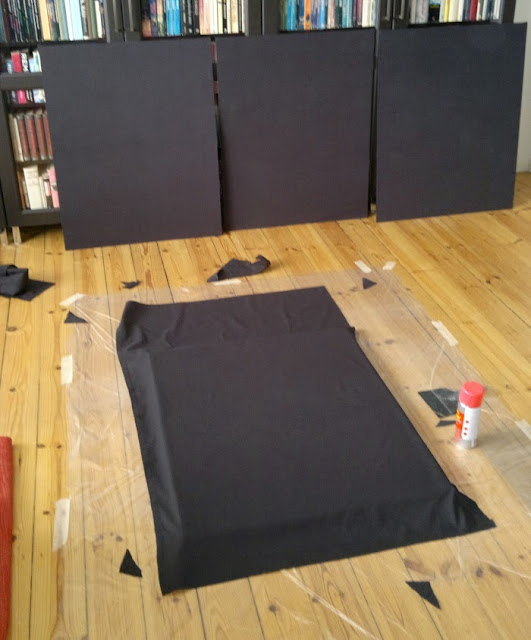 Couple months ago I noticed that one of the frames was starting to get apart, so I finally decided to replace the whole shebang. However, when counting how much new black-brown Ikea Pax steels with Pax Ilseng doors would cost, I ended up to DKK 12.000 (ca EUR 1600/USD 2100)! As I’m currently unemployed, that was definitely too much.

The obvious alternative was some kind of Ikea hack, re-using the existing closet parts.

First idea I had was to paint the whole closet. But the next price shock came in the paint shop: the special primer you need to paint melamine and glass plus the required amount of black paint would have cost around DKK 3000 (EUR 330/USD 520). So, back to the drawing board.

Then I found this hack, which gave me the idea to cover the glass panels. Luckily enough on the CPH giveaway-list somebody had four extra packs of black Dvala sheets, so I obtained them.

I also had some leftover black paint from a previous project. So instead of painting the steels totally, I decided to paint only the parts which are visible when the doors are closed, the toe kicks. I also figured that in order to stress the steels and door rails less, I should get the doors down on weight, so I decided to replace the glass panels with fabric covered fiberplate panels.

The plan in place, it was time for action. First I emptied the closets and removed all shelves, curves and curtain rails. A friend helped me to get the sliding doors down from the rails. After that I disassembled the rails and separated the steels, and found out why the system was so unstable: back panels where nailed only with couple of nails and the rails were hanging with only two or three screws!

I nailed the back panels as they should be, and reinforced the steels with couple of L-brackets. Then I painted the toe kicks black. Unfortunately the paint I had was oil-based, so I had to paint several coats and the drying time between coats was quite long, almost two days.

I disassembled the frames and removed the glass panels. Fortunately I didn’t have to disassemble the frames totally, but was able just to remove one of the vertical profiles (see pic 2). It was a great help that Ikea has all assembly instructions available on their website. Although the model of glide doors I have is discontinued, the current models are following the same design, so I could use their instructions as a guideline.

I washed the Dvala sheets to get rid of the starch. After they were dry, I cut every sheet to three pieces and ironed them.

I bought four plates of fiberboard from the local lumber shop. The shop also cut the boards to required measurements for me, so I had 12 panels.

To glue the fabric to panels I used adhesive spray. I sprayed ca 15 cm wide “stripe” on the panel, then carefully stretched the fabric on the panel while trying to avoid wrinkles, and then repeated the process until the whole panel was covered with fabric (see pic 3). I then cut most of the excess fabric and glued rest on the backside of the panel. After I had glued all panels, I reassembled the doors with the new panels.

After the toe kick paint was dry, I arranged the first three steel components (2 x 50 cm + 1 m) against the wall, checked they were even in every direction and secured them to the wall and to each other. I then reattached the door rails. I didn’t use the old screw holes as I could see the particle board was damaged where they had been, but drilled new ones.

Then I repeated the arrange-check-secure-reattach process with the other 2 x 50 cm + 1 m steels. I didn’t attach the two “modules” I now had, as the wall was actually curving a little, thus creating a small separation between the modules. Finally I hanged the modified gliding doors. The doors were so light that I was able to do that alone and they run very smoothly.

After I had reinstalled all the curves, clothes rails and shelves and rearranged my clothes, it was time to step back and admire the results (see pic 4).