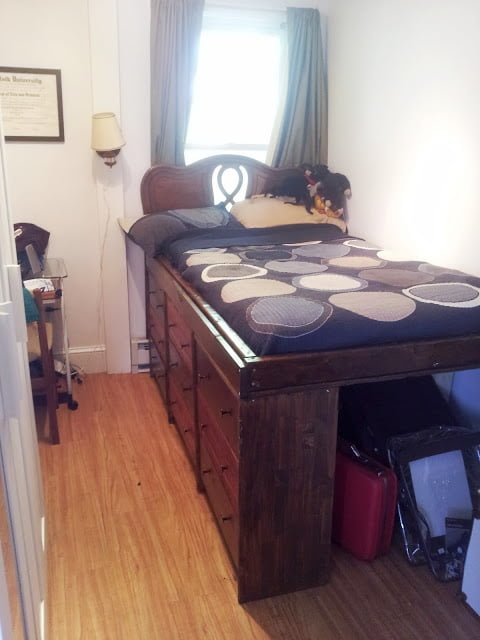 Description: I moved to a new 1 bedroom apartment recently without a lot of storage space, so I was inspired by this site to try my own hack. My initial plan was to buy a MALM 6 drawer like with this hack but when I went to Ikea I found three RAST on sale for $34.00 each and besides the price the fact that they were unfinished they were also solid wood, so I got them instead. As far as I know no one had done this exact hack before so I decided to be adventurous.

First thing I did was purchase and assemble the three RAST and then when I had the dimensions to start sketching out my idea. I then took my initial sketch to Lowe’s and the guys there helped me change a few things while still keeping the overall idea. The final plans (made in Google Sketchup) are attached here.

The lumber bought was a bunch of 2×4 pieces of lumber and one piece of plwyood for the bed base. The guys at Lowe’s kindly cut it all down for me and the total cost of lumber was $67. The first step was to secure the three RASTs to each other which I did using 1 1/2 inch wood screws, which were used throughout the project. After that I built the legs by placing two pieces of the 2x4s against each other and securing them at three points. Once that was done I put the plywood on top, screwed it to the other pieces, and then from there assembled the bed from on top. Once it was assembled I first stained the drawers and then the frame itself (only the visible parts of the frame are actually stained for ease) and if I ever need to move again I can disassemble the frame and move it as individual pieces. The headboard visible in the picture was purchased previously and I coordinated the colors to match it.

Overall it was a lot of fun and now I have a completely custom bed frame. My cat also very much likes all the storage space underneath, which I used to hold my suitcases along with extra bed linens and out of season clothing.

Also as far as the height of the bed (which some people were concerned about) it’s 32″ without counting the mattress and I’m 5’4″ with fairly short legs, but I can get up and down without a step stool.