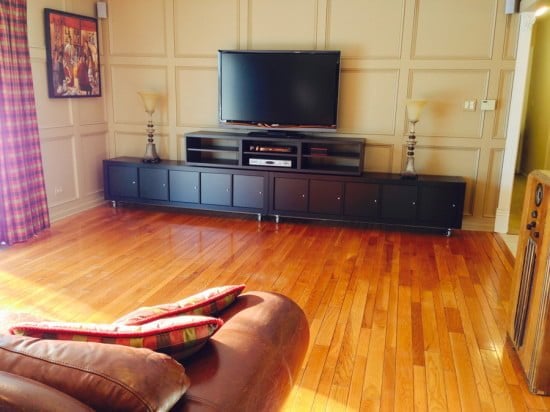 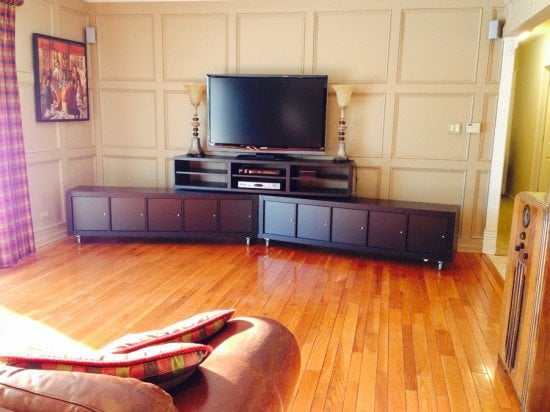 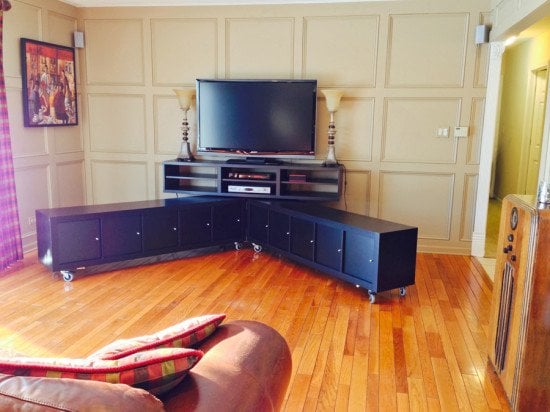 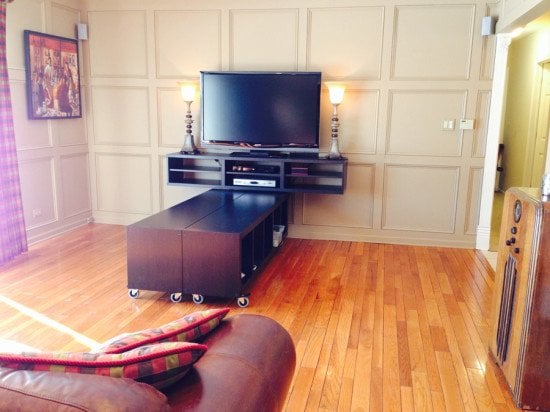 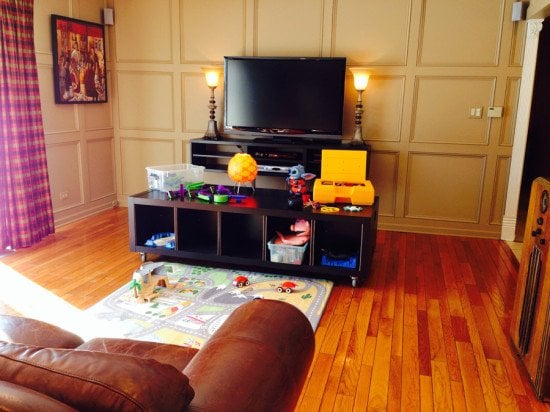 I created this cabinet debauchery by mounting a small upper Besta cabinet (meant to be a lower cabinet with legs) to my wall and affixing caster wheels to two free rolling “hinged” Expedit cabinets (meant to be tall vertical shelving units) below. By leaving the backs of the cabinets open, I was able to give the kids access to toys, that could quickly be stuffed away when returning the room to normal.

For the lower cabinets, I started by screwing four large Rill casters to the sides of each unit, which would become the bottom, of the two Expedit units. I added a set of hinges, that I spray painted black, to the ends so they could be open as one long unit, or be hinged closed to form a wider, but shorter play unit. Underneath I screwed in a window sash latch to keep the units together when set up for the kids (I didn’t want any small fingers getting pinched). 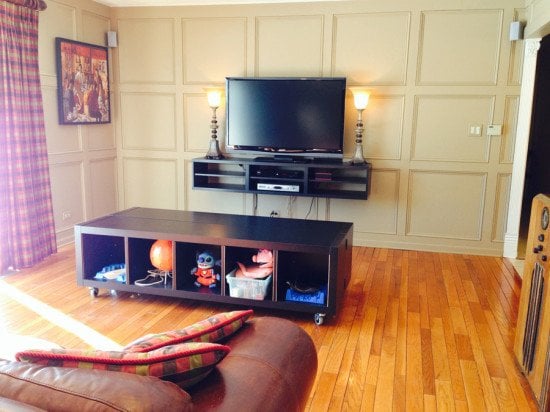 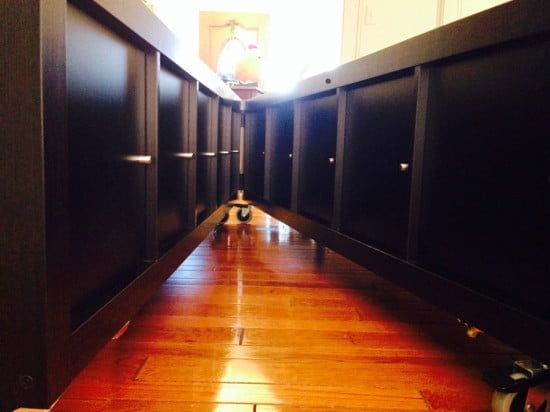 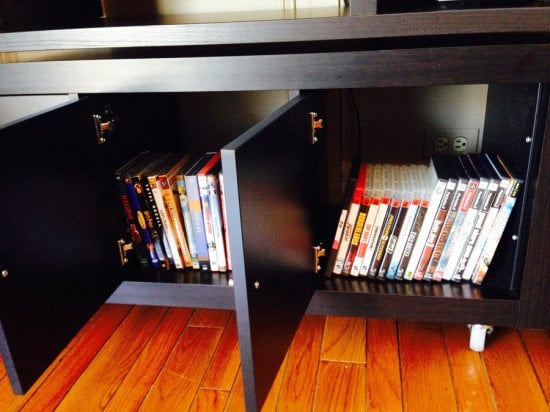 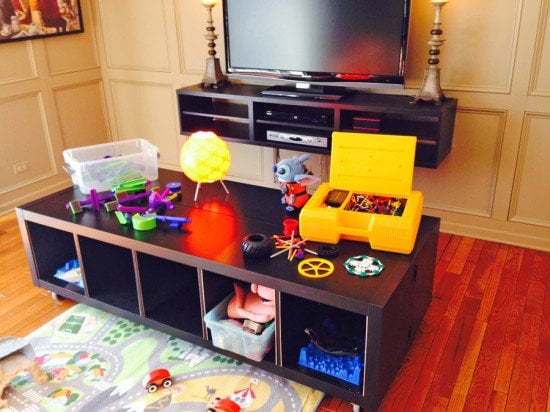 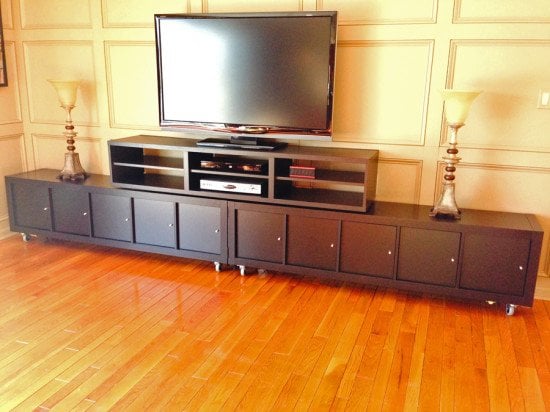 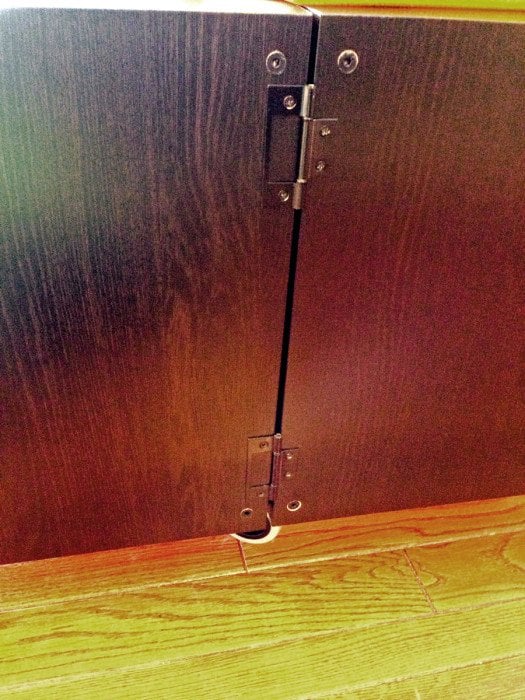 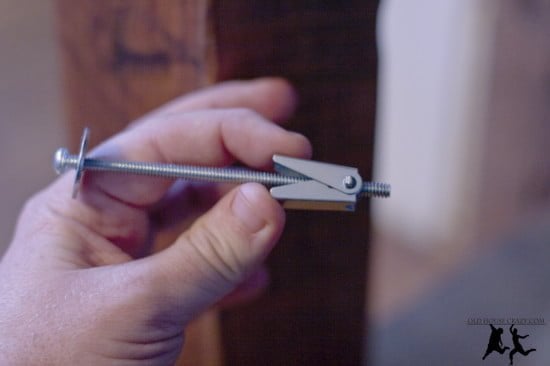 When I put on the optional doors I did a little modifying. I wanted to recess the doors by 1 inch, so that the knobs wouldn’t stick out, preventing me from folding the two units together. I also wanted to remove the “backs” of the door boxes so that I would have open cubbies from the back sides, which would become the front sides once the units were folded together. I cut off the back of the door boxes an inch from the sides with a straight edge and several passes with a matte knife, then screwed them on, inset one inch.

Mounting the Besta unit to the wall was the most challenging part of the installation. Although the Besta comes with steel brackets made for securing it to a wall, it wasn’t meant to support it, hanging cantilevered off the ground and supporting a 52″ TV, DVD player and two heavy lamps. So I threw out the small mounting screws and purchased 4 heavy-duty “toggle bolts” from my hardware store and attached the unit about 1/2″ above the rolling base units. I bolted it tightly along the top inside edge. The finished look gives the impression that the upper unit is resting on top of the base units. But, when the play center is rolled out, the toggle bolts perform admirably supporting the piece with a gravity defying illusion.

Just for fun, I added an unbreakable Fillsta lamp and the play center was complete! My kids love it and it stores easily into one of the cubbies.

My next weekend project is to find storage baskets to fit the inside of the cubbies. The nicest part is that the cabinet doors actually open, so we can reach anything on the inside the cabinets from the front, when it is acting as an entertainment center. One day, when we don’t have toys to deal with, we can use it for more grown-up storage.