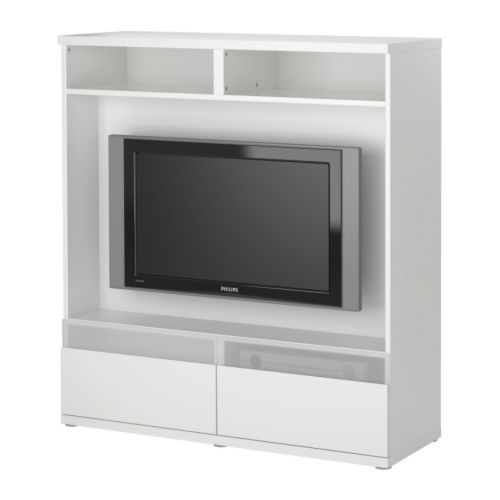 Hi guys, we’ve got a space that we’d like to fill using as much storage as possible which is 280cm high and 260cm wide. We need a floor based tv cabinet in it which we can sit the television on, but also we need enough nooks to put in a PS3 and tv satellite box that will be on view. So far, so easy…apart from the wall we would like to put this against is hollow with insulation inside and the home is rented, so ideally we would like to avoid mounting anything on the wall (we’re a bit nervous of missing wooden battening and making multiple holes in wall or not supporting units properly and it falling down). We are planning on using the storage for books, DVDs and video games. We would like to run the cabling through the back of the TV unit and to sockets on the adjoining wall.

We had the idea of using the combination of two 60 x 40 x 192 bestas with a Besta Boas in the middle of them supporting a 120 x 40 x 64 besta on top and only this unit affixed to the wall for extra support, but have been told by Ikea in the UK that the Boas has been discontinued and there is no stock left in any of the stores left in the UK!

Does anyone have any ideas on what units, modified or otherwise we could use to create a sleek, square unit using either besta or billy that has all junk fully hidden apart from the TV, games console and satellite receiver or alternatively a combination that is idiot-proof when it comes to wall mounting if this isn’t a possibility?