My BF and I signed up for a large group cooking party (it rotates through the community) and realized that we didn’t have nearly enough counter space. Our kitchen is all on the small side, and we wouldn’t need the extra horizontals forever; here’s our solution.

The Bjorkudden table was the right height for me (I’m 6’4″) so that’s where things started. I cut the larger Gerton tabletop into three pieces – the middle cut to the same size as the Bjorkudden top – with the metal stabilizers ending up almost in the middle of the two smaller sides. 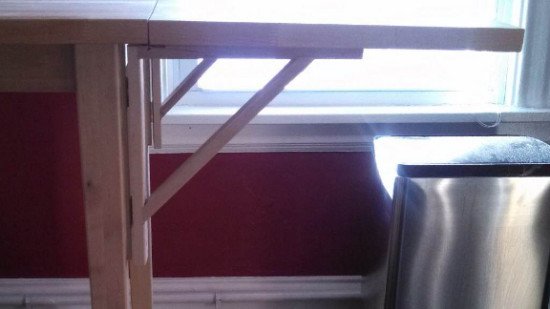 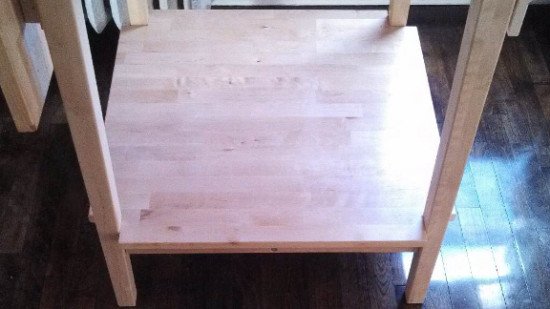 Hinges from a local hardware store were integral to the project. I attached piano hinges to the underside (flat) where I had cut the Gerton. Then I cut the brackets to 90 degrees. The hinges were attached near the top and bottom of the brackets with the screws included in the package.

The tabletop was attached to the standard assembly of the Bjorkudden. (I drilled holes into the tabletop before using the included screws.) Then while the table was upside-down I attached the brackets making sure to keep them perpendicular on the tapering legs.

The final step was to cutout the original Bjorkudden top to fit as an additional shelf at the braces. I thought it would be good for stability, but it may not be necessary. I didn’t attach it permanently, but will likely keep it as it works a a good foot rest for the shorter member of the household.