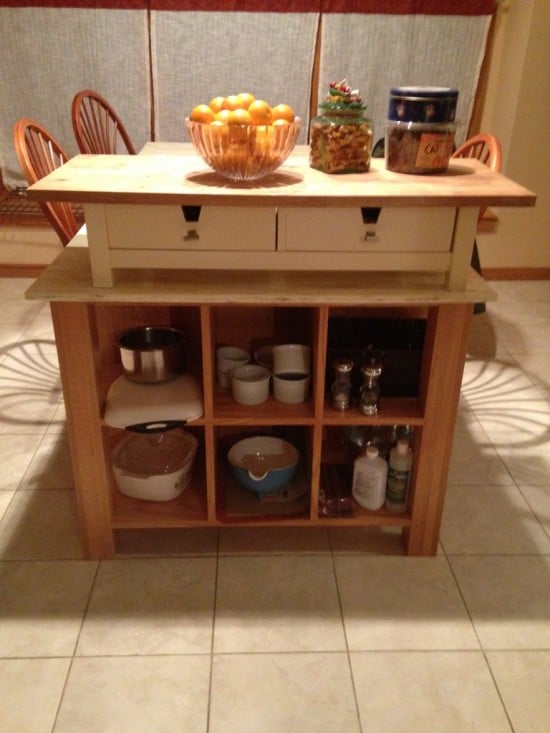 I wanted a kitchen island but my kitchen is too small to have both an eat-in dining table and an island. I searched for a combination table and island. I didn’t find anything suitable.

My “hack” was to take an Ikea Forhoja kitchen cart (cost=$99.99) and make it into a portable table-top island.

I did NOT make the table part of my combo table/island with Ikea pieces (perhaps you could!). I only made the table top island. 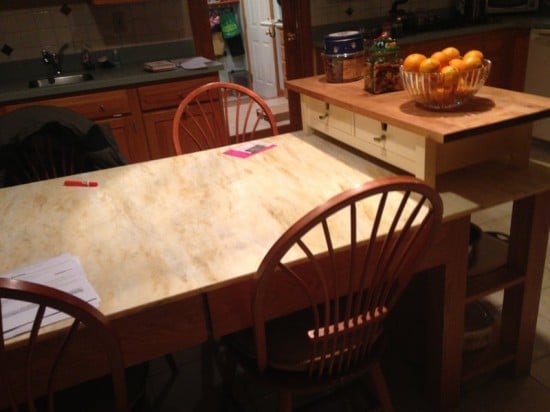 The table has two standard legs on one end, but it has a sturdy shelving unit under the other end instead of legs. I had the table made this way to have enough support under the island top. I am not sure the extra support is necessary, but the added shelving space is useful in the kitchen anyway.

The only “hacking” I needed to do was to cut the legs of the Forhoja kitchen cart to the desired length. Prior to any assembly of the cart according to the standard Forhoja instructions, I cut the leg pieces that were provided to 8”. Given the height of my table, the butcher block island top is at the desired height for me to use the island as a prep area. I cut the legs with a power saw. I put masking tape around the legs where I made the cut so I did not damage the legs.

I assembled the top of the unit according to the Forhoja instructions and the rest of the hack was cosmetic. I primed the base, drawers and legs and painted them a high-gloss cream. I added drawer pulls on both sides of the drawers. I added felt pads to the bottom of the legs. I considered adding handles to the sides (and that is possible). But we do not move the island top very often so I decided the handles were unnecessary.

The island top is useful as a prep area (as I expected) but it is also extremely practical while we eat at the table. The drawers are accessible from both sides, so I keep trivets and serving spoons in the drawers. I can keep some hot food items on the island top while we eat instead of having them on the table. 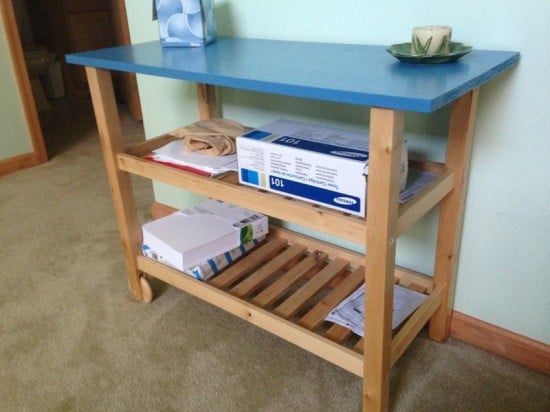 Finally, I also assembled the bottom portion of the kitchen cart with the shorter leg pieces and made it into a computer cart. I bought a piece of ¾” thick hardwood with the same dimensions as the butcher block top that comes with Forhoja cart (approximately $8 at the local hardware store). I used double-sided 3M tape (the thick white kind) to attach the new top to the four legs on the bottom of the cart. I primed and painted the top (high gloss paint). In total, for approximately $110, I have a table top island and a computer cart!