How awesome would it to lie in bed and watch a movie on your iPad hanging overhead? It seemed really relaxed to me, so I went around looking for an iPad holder for bed. 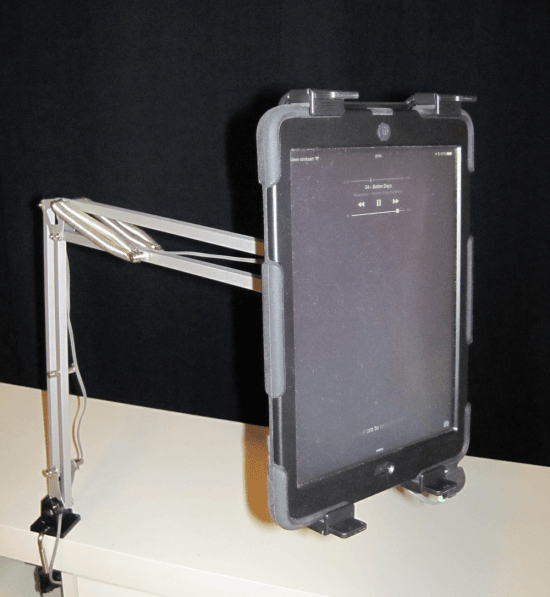 Unfortunately they don’t come cheap, so I figured to build my own. The main requirement is that it can hold my iPad Air in it’s Griffin Survivor case (total weight approx 800-900grams).

– Ensure that the lamp is not plugged in!
– Unscrew the lamp head from the arm
– Loosen the screw keeping the lamp wire fixed to the lamp head
– Remove the lamp socket. It is held to the lamp head with 2 plastic clamps. The best way to get it loose is to use your thumb to push the socket against the side of the lamp head, causing the clamp on the opposite to be slightly opened. Pry a small screwdriver in between to completely open the clamp. Pull out the socket, cause the other clamp to let loose.

– Ensure that the lamp is not plugged in!
– Remove the wires to the socket, they are clamped.
– Remove the wire altogether by pulling it through the swing arm.
– Don’t throw the lamp head and wires away! You could use them to make a hang lamp.

– Flatten the end of the arm
– Screw the iPad holder to the arm using some small screws. Be sure to attach it to the center of the iPad holder, else the iPad will not be balanced and will rotate.
Note that the iPad holder I have is adjustable in size and had a little lever for adjustment. The lever was unnecessary and in the way so I cut it away.

My iPad in its rock solid case is a little overweight, and too heavy for the arm. I tightened all the screws on the arm to provide more friction and I doubled up the springs on the upper part of the arm.

Step 5: Pro-tip: prevent the arm from falling out of its base

The swing arm of the Tertial stands loose in its base, and completely extending the arm with a heavy iPad could get the arm to fall out of the base. To prevent this from happening again I added a little screw into the arm. The arm already has a wide notch that seems to be made for this solution. The only drawback is that you can’t swing the arm all the way around, but it is still more than 180 degrees.

As a finishing touch I fed an audio jack cable through the swing arm so I get some quality sound when watching a movie!

See more of the Tertial iPad holder for bed hack + many pictures on Instructables.