Now, the beauty of my version is the DIY Sputnik Chandelier IKEA style is there are so many ways you can customize it.

Want a full globey one? Check. 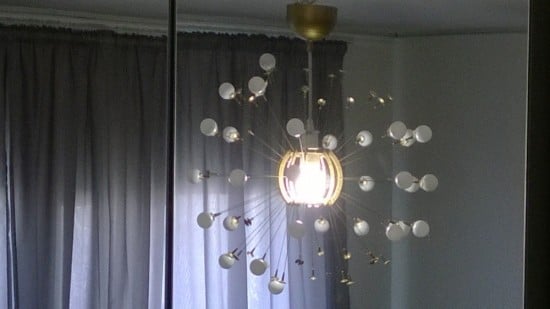 Bottom line: you can do this Sputnik Chandelier IKEA hack project for under $100, probably even less. Mine cost under $40 in parts + free stuff laying around.

How to make a Sputnik Chandelier IKEA hack

Sputnik Chandelier IKEA Hack Part I: The Patina (aka The Outsides)

As my base, I decided to use the IKEA Maskros lamp. I tried my luck and found this normally $50 small version for sale on Craigslist for $20. Though, the small one was still pretty big and I didn’t want to overwhelm my bedroom.

Since my lamp came preassembled courtesy of kind CL-er, I used a butter knife to pop off the buttons that hold the papers in place. If you buy it new, you will have it way easier.

You can either bust those buttons or use them. I didn’t use mine.

[NOTE: I saved some of the dandelion papers to paint and use for a firework 4th of July garland]

First, using either a butter knife, or if you have a small/regular Phillips head screwdriver, remove the plastic ring from the metal bracket that is the top part.

Take this ring, the bottom ring, and 10 of the 14 spokes (if you want less globe, more Sputnik), and the two plastic parts that are the very top of the lamp and spray paint.

I used MTN gold 94. It’s less metallicky, which I wasn’t actually going for. (Home Depot didn’t have brass colored spray paint. But I had some MTN on hand = $0). After I sprayed, I really liked the look. 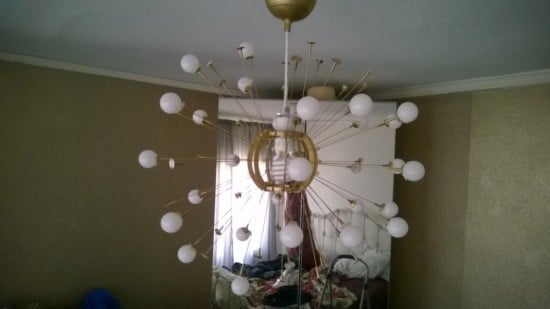 1. You can just spray the letter sides of the rings. Make sure you get good coverage on the insides and outsides.

2. For the spokes, I started at the head and went over the length twice. I didn’t worry about the flat part of the head.

3. And you don’t have to worry about spraying the part of the large cup that the small cap will cover.

4. Didn’t spray the buttons since I didn’t plan on using. You could also leave white or paint another color and use to make it interesting.

I used that tube to hang dry the spokes, but spray paint generally dries pretty fast. Incidentally the tube was from an IKEA rug I bought months before.

As you’re waiting for the paint to dry, instead of watching it, you can move to Part II.

My husband wants our room to be really bright. Envisioning this project for our room and discovering that

a) this lamp comes with one decorative bulb socket and

b) the brightest bulb IKEA makes to fit it is only 400 lumens (or about 40 Watts), I knew I was going to have to rewire it. Have I ever rewired a lamp? No. But my grandpa was an electrician in the Navy in WWII, so I figured it’d run in the family…and I have the Internet in my house.

If you are happy with a 400 lumen decorative bulb, then yay! You can move to Part IV. If not, keep reading.

Why a SEKOND and not HEMMA?

I know what you might be thinking: “IKEA sells the HEMMA cord for a pendant light (in double and triple bulb too (which could work for the PS MASKROS)), why wouldn’t I just use that one? AAAAND THIS IS A PLUG IN. You’re telling me you’re gonna use a janky plug light for your pendant? I thought you knew what you were doing.”

Yes, you’re right, blog post reader, you could use a pendant cord/kit etc, but the SEKOND has a beautiful part that makes this lamp a piece of pie. See those holes right there (you can see 4). That’s what makes this pie.

[Background info you can skip if you want to]: I tried a few different ways to make this lamp the brightest I could. The SEKOND cord can handle 60W, so after experimenting with the lumens (too dark), using socket adaptors to use 2-3 bulbs (too bulky), adjusting the cord length, researching swapping out for a stronger socket, etc., I decided to use a single 1500 lumen CFL bulb in the single socket.

I used one spoke to connect the rings and I adjusted the hole-y part on the SEKOND socket to just the right height. Bing! 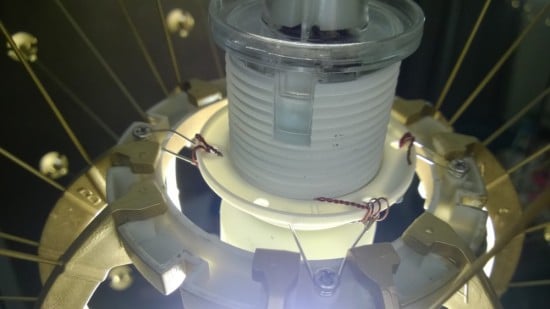 Ignore all those spokes. I took the pic after. Also, ignore the safety pin that popped open. It’s okay if that happens.

The top part of the pins are under the Sekond piece, because it needed extra height. You definitely want to do this pre-spoke because you need the space. Also, have the light bulb you want in at this time. It makes the process easier.

This is where it gets tricky. But have no fear; it just is more time consuming than complicated; and if you have the right tools, it’ll be a breeze. 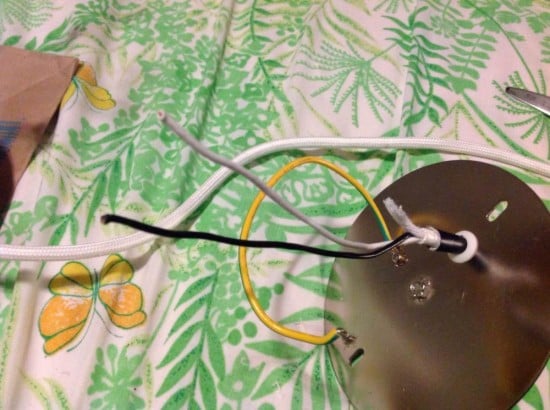 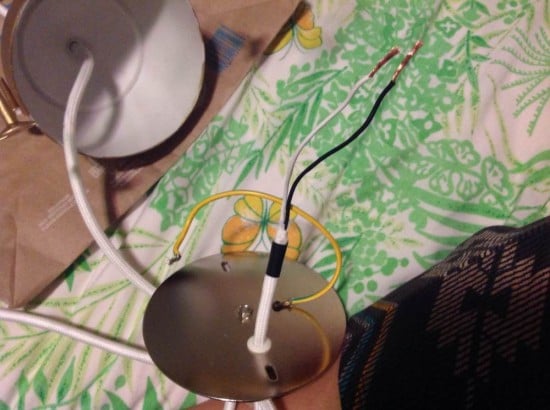 You remember we have that plug problem.

Converting the plug-in into a ceiling light

Well, we also have a great tutorial on how to convert a plug-in light into a ceiling light. Google gives tons of results for the other way around, so I’m really ecstatic I found this. I just found a few others, but this one is simple. Basically:

1. Measure how much cord length you need, i.e., how low or high you want it to hang, and add 6 inches. (Now thread it through your two upper plastic parts and the metal plate.)

2. Strip cord down to black and white wires. Use wire cutters to expose the copper wires.

You have waited long enough for the paint to dry. Put those spokes in, girlfriend! I had to use some gentle strength because the paint adds some layer and they need to click in. 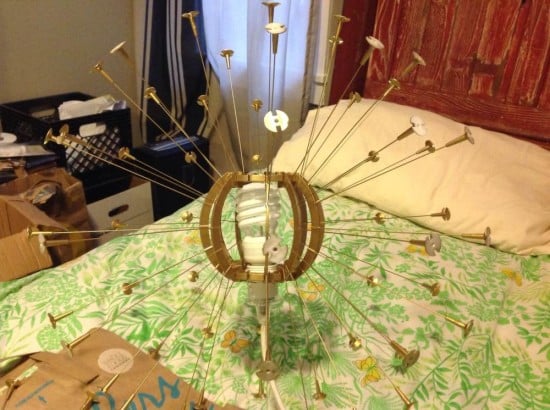 Then wire it to your ceiling or call a professional. REMEMBER TO TURN OFF THE ELECTRICITY AT THE BREAKER BOX if you do it yourself (and you might cover any surfaces your light is under…I got ceiling dust on my bed oops). I did mine at night and used a headlamp.

All things bright and beautiful.

BUT WAIT, THERE’S MORE!
Remember how I said there are a bajillion ways to customize this bad boy? Here’s how. 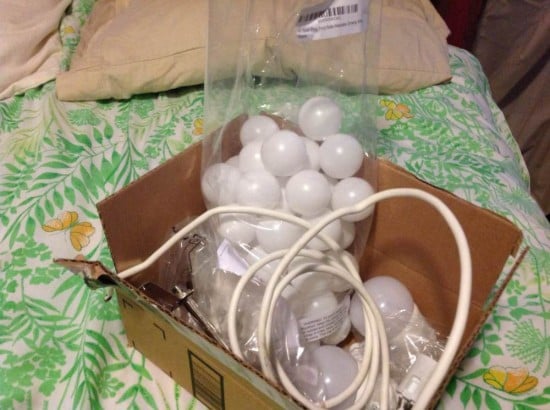 The arms of this lamp are very delicate. I brainstormed for what I could use to make this lamp flippin’ awesome and the answer came to me in Target: ping pong balls.

You can get all kinds of colors, some have stars. Actually, I wanted to spray paint mine teal/turquoise, but I haven’t found the right spray paint yet.

To visualize what kind of lamp I wanted, I used masking tape. I made half of it a globe and half of it more orbital: 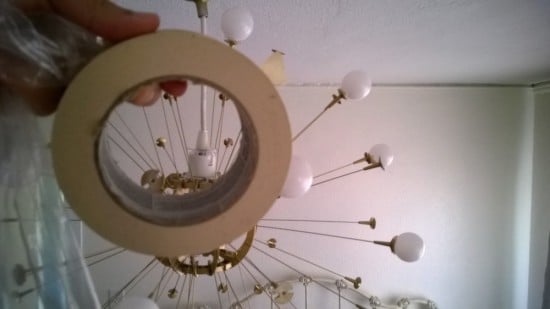 Found that I leaned toward the orbital style, so I moved all the balls to the middle. For each spoke, I had 3 on.

I decided that looked too cluttered, so I removed the middle balls all the way around. Balls.

That looked too sparse, but I liked it much more than the 3-fers.. I did some math: 2 balls per spoke x 10 spokes = 20 balls. I remembered from my research that a 24-arm lamp is common. So I grabbed 4 more balls and decided to place them where my heart and eyes desired.

Ding ding ding, we have a winner.

Sticking on the balls

I decided to leave them there for a bit, go away and come back to see if I still liked it. Then, I went to lunch with my Hubs, showed him the pix of my progress and got feedback on what he liked, and then came back and glued.

Me still liked. So I went to work. I grabbed Krazy glue which did not work. But I had the brush on kind. Maybe the squeeze kind would be different. I bought Aleene’s Glass & Bead glue also because it dries clear and fast, goops on, and it said works for hard plastics. Boom.

You can see how it goops out the tube on its own. This actually helped me mark the end spoke I needed to glue (top picture) so I wouldn’t forget when I was removing the masking tape from the ball. Then get a fair glob on the ball and hold in place for 10-15 seconds. After I did that, I had to go back and adjust some of them because of gravity, but it wasn’t a big deal. None of them fell off. 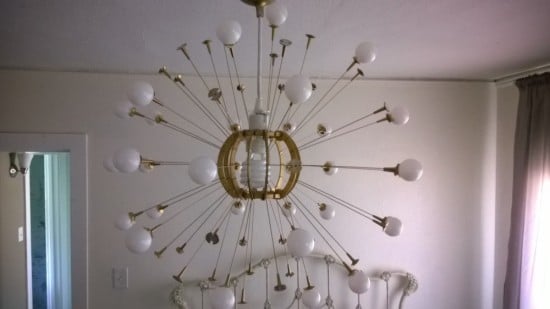 I might go back and use wire cutters to cut some of the arms off (but that’s permanent, so I’m waiting) or touch up some of the sparsely painted ends. For now, I am THRILLED with my new fixture.

Other ideas for your Sputnik Chandelier IKEA hack

I also ordered what I thought were 1.5″ plastic bubbles; turns out they were heavy acrylic balls, and 2, not 20 like I thought. My hunt for clear lightweight circles continues, and I have some ideas. You can also use pearly twisty ties from Michaels’ wedding aisle, gems, acrylic jewels, beads, poms, marbles, ornaments, outdoor light bulbs, half spheres, small paper lanterns, etc. You can use 8 spokes instead of 10, or all 14. Ceiling’s the limit! 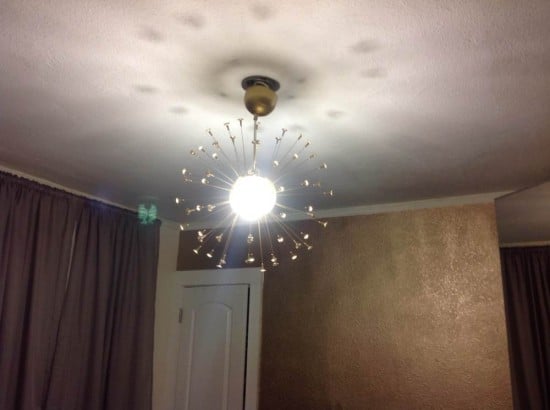 Good luck! And here’s to a brighter tomorrow!

For the GLOBE half I did:
Going counterclockwise on the top ring, I had:
B A B [gap] B A [gap]

If you go the globe route, I’ll leave it up to you to figure out the other half! 🙂 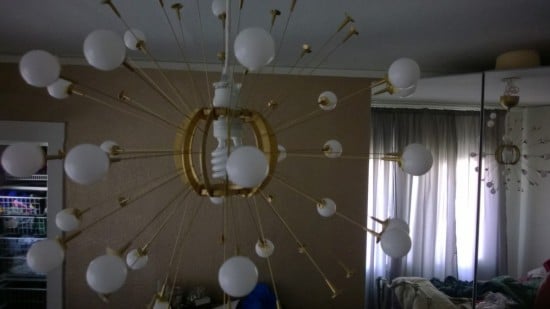 See more of the Sputnik Chandelier IKEA MASKROS hack on my blog.