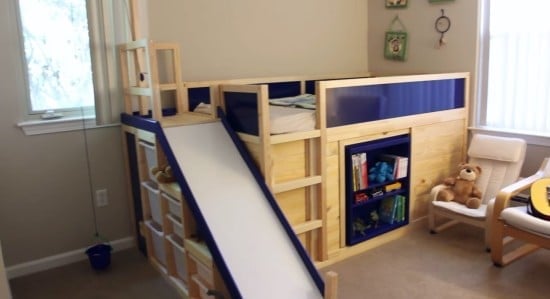 My son needed to give up his convertible toddler bed for his little sister, but would only do so if provided the “most awesome bed ever” in exchange. I decided to attempt my first IKEA hack by transforming a Kura bed into something personal and fun. He enjoys playground slides, simple machines, kinetic ball sculptures/marble runs, and exploring/hiding in general. I put all those ideas together:

1. Assembled the Kura largely as designed, in the loft orientation.
2. Attached the 3 tiered Trofast storage system along the side of the Kura.
3. Attached a piece of whiteboard to the top of the Trofast to use as a slide. (The slide surface ended up being a little too fast and too easily scratched. I may need to replace it with a different material in the near future.)
4. Connecting the top of the slide to the bed as a separate platform component. The platform has 2 major features:
a. A crane and pulley, to which is attached a bucket. The crane rotates around its long axis.
b. A simple and hidden ball run which accommodates golf balls. A simple internal mechanism holds on to any balls dropped inside until 6 are collected together, and then it dumps them all at once, back into the bucket at the bottom. 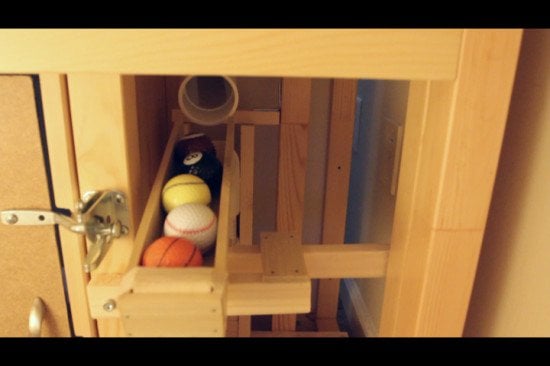 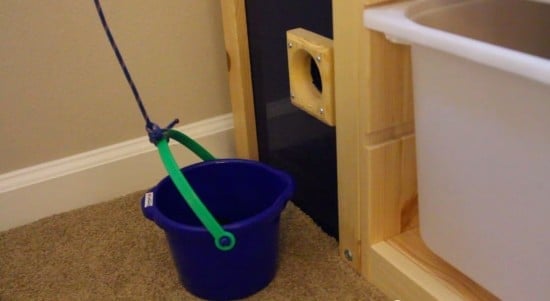 5. Covered the empty space under the bed with lightweight wood paneling fixed to medium density fibreboard (mdf).
6. As a separate component, attached a pivoting axel to the side of a small Besta wall shelving unit, which was then set within a rigid, mini door frame. The swinging Besta was then used as a door into the space under the Kura, which is now transformed into a secret room.
7. A locking mechanism for the Besta door utilizing a fake book was included, to add to the secret door effect. 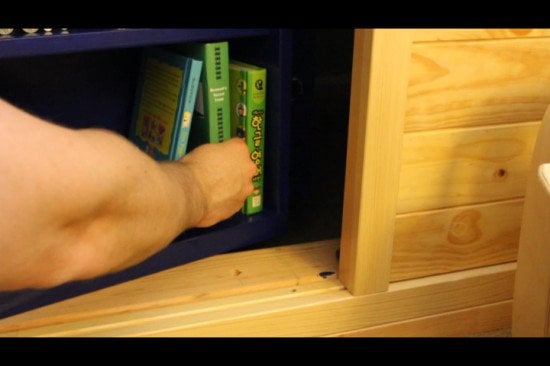 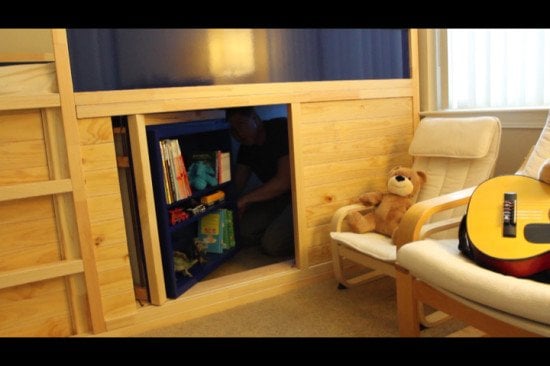 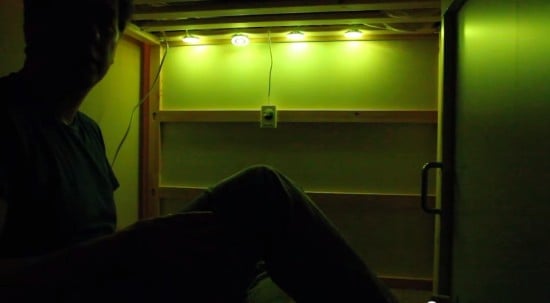 8. A backup, one-way escape hatch from the secret room was created, in the event the Besta door mechanism fails with someone inside. The hatch opens up behind the Trofast bins.
9. A 2nd Kura bed was purchased to use for spare parts, in order to make sure all components of the bed matched. Almost every piece of the 2nd bed was used somehow:
a. Main support beams used to create the platform, crane, and support structure for the secret room.
b. Wooden slats used for the platform floor and rails for the slide (among other places)
c. Mdf used for attachment of the wood paneling
10. The externally visible mdf was covered in dark blue contact paper. The Besta door/bookcase and slide rails were painted to match.

Please view my 8 min video outlining the design and construction of this hack below or via this link.